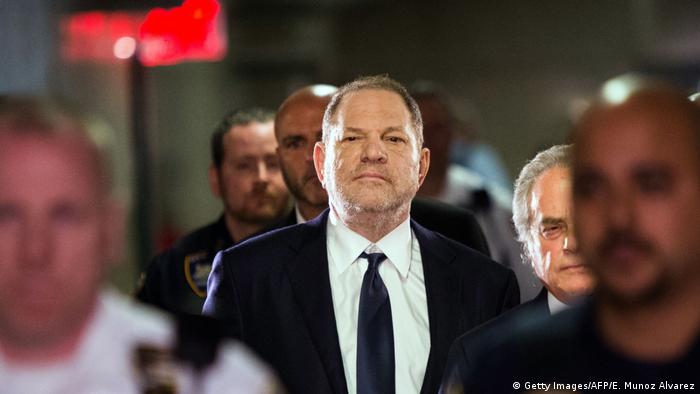 "Because it's been an open secret in Hollywood/Media & they shamed me while adulating my rapist," she wrote in October 2016. But she was finally breaking her silence.

The tweet came on the heels of several public trials of prominent media personalities for sexual assault and harassment, including actor Bill Cosby and Fox News host Bill O'Reilly.

While rumors about Harvey Weinstein's behavior towards women had long been circulating within the film industry, no one had gone on record. A groping case against the producer was looked into by the New York Police Department in 2015 but no charges had been filed.

Jodi Kantor, a New York Times reporter who had been covering workplace sexual harassment, saw McGowan's tweet and eventually reached out to the actor for more information. That conversation got the ball rolling on what would be a groundbreaking investigation into wrongdoing by the movie mogul.

'She feared that Weinstein would crush her'

Kantor's expose, which was first published in the New York Times on October 5, 2017, revealed accusations of sexual assault, rape, harassment and intimidation across decades by women who had worked with Weinstein. Prominent actors including McGowan and Ashley Judd went on record with details of their experiences with the producer. Once these women came forward, others followed.

Just a few days later, on October 10, 2017, journalist Ronan Farrow published the results of a similar investigation he'd undertaken in the New Yorker. He quoted 13 women, including actor Mira Sorvino, who described being assaulted by Weinstein.

Noting that some of the accusations dated back years, and that other investigations had fallen short in terms of evidence, Farrow explained there was a plausible reason for the delay in reporting on Weinstein.

He quoted Weinstein accuser, film director Asia Argento, who said that "(s)he feared that Weinstein would 'crush' her. 'I know he has crushed a lot of people before,' Argento said. 'That's why this story — in my case, it's 20 years old, some of them are older — has never come out.'"

Since those initial revelations, which sparked a worldwide revitalization of the #MeToo campaign against sexual harassment, over 100 women are estimated to have accused one of Hollywood's most prominent producers of sexual misconduct.

Timeline of a downfall

The back-to-back reports by Kantor and Farrow not only led to a public outcry but had a series of consequences for Harvey Weinstein and Miramax Films, the company he co-founded with his brother Bob in 1979.

So what exactly has happened since the first Weinstein revelations? The following timeline breaks down important events in the sexual assault cases against the Hollywood mogul:

●         October 5, 2017: Immediately following the publication of Kantor's investigation in the New York Times, Weinstein issued a statement to the paper saying, "I so respect all women and regret what happened." He also threatened to sue the newspaper;

●         October 8, 2017: Weinstein takes a leave of absence from The Weinstein Company, which was launched by Harvey and Bob Weinstein in 2005 after they left Miramax;

●         October 14, 2017: After further accusations were made, the Academy of Motion Picture Arts and Science, the organization behind the Oscars, votes to expel Weinstein, whose name had been one of the most frequently invoked in thank you speeches;

●         March 20, 2018: The Weinstein Company files for bankruptcy, dissolving all existing non-disclosure agreements and enabling accusers to speak freely in court;

●         May 25, 2018: Charged with rape and several other counts of sexual assault against two women, Weinstein turns himself into the New York Police Department and is released on $1 million (€900,000) bail the following day; 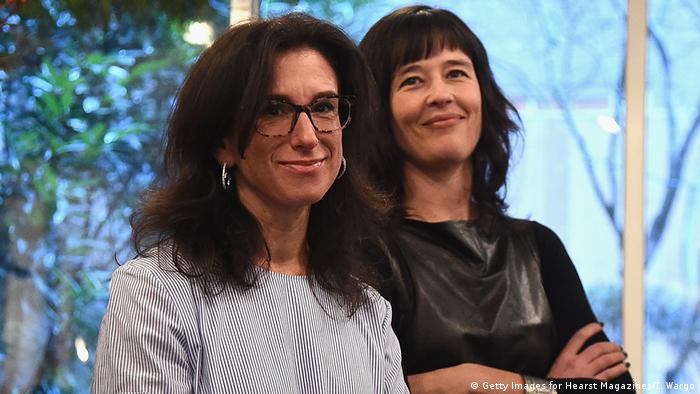 They broke the Harvey Weinstein story for the New York Times and won the Pulitzer Prize: Jodi Kantor and Megan Twohey

●         September 25, 2019: New York Times reporters Jodi Kantor and Megan Twohey release their book, She Said, detailing their reporting on the Weinstein accusations and his use of intimidation tactics to prevent the release of the investigation;

●         October 5, 2019: Rowena Chen, a former assistant of Weinstein's, reveals in an op-ed in the New York Times that she was assaulted while working for him;

●         December 11, 2019: Weinstein is fined by the state of New York for tampering with the electronic ankle bracelet he was required to wear while out on bail;

●         December 11, 2019: Another tentative agreement to settle civil suits between The Weinstein Company and nearly 30 actors and former employees is reached for $25 million. Not all women agree to the suit's terms and intend to challenge it;

●         January 6, 2020: Weinstein's trial begins in a criminal court in New York City. Six accusers testify that Weinstein had sexually assaulted or raped them. The defense calls various witness, but Weinstein himself does not testify;

●         February 13-14, 2020: After a roughly five-week trial, closing arguments from the prosecutor and defense teams are delivered; Weinstein's lead defense attorney, Donna Rotunno, doubts the accusers' motives, while Assistant District Attorney Joan Illuzzi calls Weinstein "master of his universe" and accuses him of seeing the alleged victims as "ants that he could step on";

●         February 24, 2020:  The jury finds the former film mogul guilty of two of the five charges: predatory sexual assault and rape, carrying a possible sentence between five and 29 years;

This article has been updated since its initial publication on January 6, 2020.

A Manhattan prosecutor said the indictment has brought "the defendant another step closer to accountability." But the ex-film producer's lawyer said his client "strongly denies" allegations of non-consensual sex. (31.05.2018)