Disgraced Hollywood movie mogul Harvey Weinstein has pleaded not guilty to charges of rape and sexual assault, opening a symbolic legal battle with a #MeToo movement that is demanding justice. 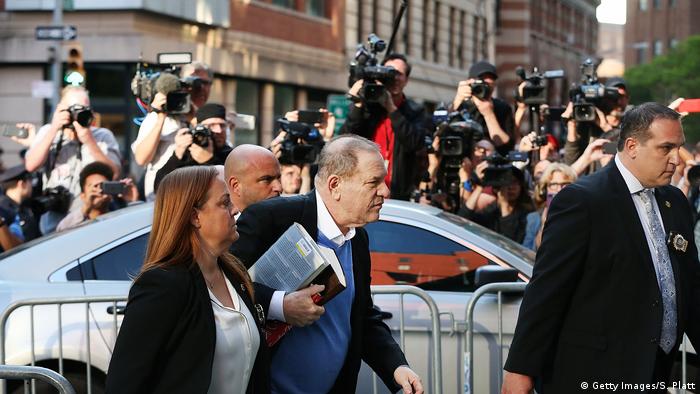 Weinstein, 66, turned himself in at a New York police station on May 25 and was taken to court in handcuffs for his initial arraignment. He posted a $1 million (€865,000) cash bail on condition that he surrender his passport and wear a location-tracking device while remaining in New York state or Connecticut.

Read more: Opinion: Why time's up for Harvey Weinstein

Some allegations date back decades. Actor Asia Argento recently reiterated in Cannes that she was raped by Weinstein during the Cannes Film Festival in 1997. She was then 21.

"This festival was his hunting ground. I want to make a prediction. Harvey Weinstein will never be welcomed here ever again. He will live in disgrace, shunned by a film community that embraced him and covered up for his crimes,” she said while presenting an award.

Such accusations against the Miramax studio co-founder, first reported by The New York Times and The New Yorker last year, helped spark the #MeToo movement in which hundreds of women have publicly accused powerful men of sexual misconduct and harassment.

Prosecutors from the Manhattan district attorney's office have not named the two women accusing Weinstein of sexual assault in the criminal complaint filed against him following a months-long investigation with the New York Police Department.

If convicted on the most serious charges, Weinstein could face between five and 25 years in prison.

Weinstein is also under investigation in Los Angeles and London.

Oscar-winning actor Morgan Freeman is the latest Hollywood figure to face allegations of sexual misconduct. US news network CNN said it spoke with eight women who claimed to be victims of harassment by Freeman. (24.05.2018)