After Greenpeace activists absconded with the "C", they unfurled a banner next to the remaining letters that translated to: "You should protect the climate." The move came just ahead of the CDU's annual party conference. 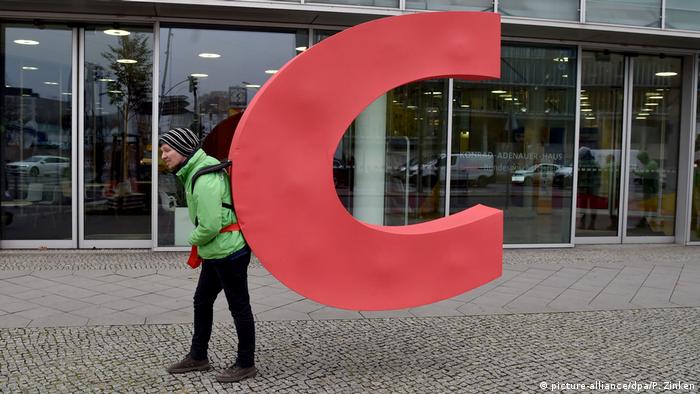 Environmental activists with Greenpeace removed the "C" from the headquarters of Chancellor Angela Merkel's Christian Democrats (CDU) in Berlin on Thursday.

Videos of the protest showed an activist walking away from the CDU headquarters with the big red C strapped to their back. That left only the letters "DU" remaining on display — which is the German word for "you."

Other Greenpeace members appeared and rappelled from the roof to unfurl a banner next to the DU which translated to: "You should protect the climate."

Shortly after the C disappeared, an account called "I am the C" appeared on Twitter — documenting the C's travels through the German capital and calling out Merkel's party for its failings.

"Hello World! I am the C of the CDU and I've had enough! I can't be with [you] any longer. Protecting creation means protecting the climate," read one post, referencing one of the conservative party's campaign slogans.

It was unclear what the activists planned on doing with the C, but they vowed that the red letter was "going on a trip."

'We're happy to lend it to them'

CDU leader and German Defense Minister, Annegret Kramp-Karrenbauer, appeared to take the protest, which took place shortly before the start of the CDU'S annual party conference in Leipzig, in her stride.

"It wouldn't hurt Greenpeace to have a 'C' [that stands for] for Christianity and sustainability — we're happy to lend it to them for a short time," she said, according to news agency DPA.

CDU secretary general Paul Ziemiak posted a picture of himself from the party conference posing with another, older copy of the party's logo.

"We're in luck since the original 'C' is here in Leipzig," he wrote.

The party, or supporters of the party, countered the Greenpeace protest by creating the rival account "I am the DU" on Twitter. One of the posts, which said it was a "love letter to the C," included a link to the CDU membership page.

Greenpeace said it planned the logo letter theft to protest against the CDU's "disastrous climate policies."

Although the plan, which was hammered out by Merkel's coalition government, seeks to cut greenhouse gas emissions to 55% of the 1990 levels by 2030. Germany is lagging behind its current goals, having only achieved 30% of the target it hopes to achieve by 2030.