Angela Merkel wants to encourage people to switch to electric cars as part of efforts to cut carbon emissions. The chancellor says mobility in the future must be "climate friendly." 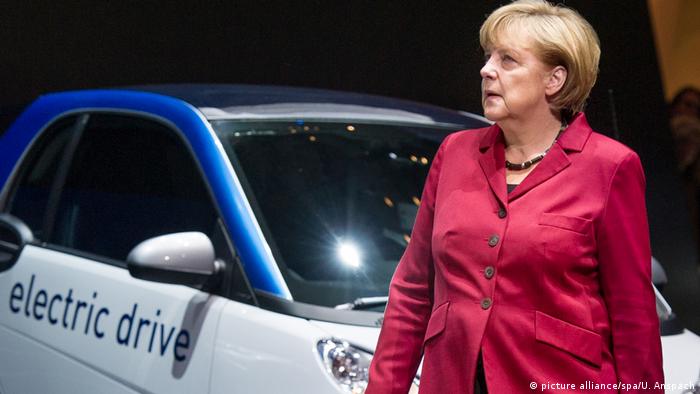 German Chancellor Angela Merkel said Sunday she wants to see 1 million charging stations for electric cars across the country by 2030.

Speaking in her weekly video podcast, Merkel said boosting the number of charging spots for e-vehicles would encourage consumers to move away from internal combustion engines and shift to low-emission cars.

Mobility in the future should be "climate-friendly, flexible, value for money and comfortable," Merkel said.

Germany currently has around 21,000 charging points.

The government is hoping to cut carbon dioxide (CO2) emissions in half by 2030. To help meet that target, Berlin has introduced a number of measures to promote greener modes of transport, including offering subsidies of up to €4,000 ($4,400) to offset the cost of a new electric vehicle.

Merkel said further electric car buyers could be attracted if the government and industry share the cost of increased subsidies.

Read more: Electric cars — Low earners may never get to drive one

The chancellor's comments came ahead of a planned meeting with car industry executives on Monday.

Merkel said the event would focus on how Germany's car sector can meet emissions targets by promoting alternatives to gasoline and diesel vehicles, and how Germany's shift towards electric car production will impact workers.

"We want to take our specialist workers along on the road to a modern, climate-friendly future," Merkel said.

Opinion: The war on automobiles is a war on freedom

Driving bans, stricter emission rules and a hysterical debate over air pollution — this combination could permanently harm Germany's industrial icon. DW's Henrik Böhme asks whether the country really wants to do that. (25.10.2018)

Germany's court system has acted where lawmakers wouldn't by allowing cities to ban diesel cars. The decision could force a change in how the country approaches its auto industry, says DW's Jens Thurau. (27.02.2018)