According to official statistics there are around 124 million women working in India. But only 4 percent of them have regular jobs protected by social insurance systems. The vast majority work in the so-called informal economy: Their jobs are insecure, poorly-paid and do not have any social protection. Studies show that these women and their families have been particularly badly hit by the global financial crisis. 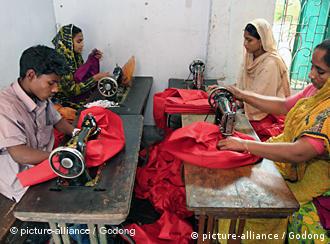 Countless women in India earn their living as domestic workers, agricultural labourers, street vendors or waste pickers. In these insecure and poorly paid jobs, they immediately suffer if the demand declines due to market fluctuations.

Waste pickers -- mainly women and children -- have been particularly hard hit by the latest financial crisis, says Renana Jhabvala from India’s Self Employed Women’s Association (SEWA). They get their income from picking up waste paper, bottles and metal in the streets and selling them for recycling. Hundreds of thousands of them risk losing their livelihoods.

“All over the world, as soon as the financial crisis started, the prices of waste started coming down, almost by 50 percent in India,” said Jhabvala. “So the women who were working very hard -- the paper pickers, the waste pickers -- had their earnings reduced by 50 percent. The poorest of the poor have been very badly affected.”

Pressure on textile industry in Bangladesh

In neighbouring Bangladesh, many of the two million female textile workers are also worried they might lose their jobs and will drift into the informal economy.

If international demand has not yet collapsed it is because of the extremely low production costs, says Dirk Saam from the German aid organisation Netz.

But the pressure is on, he says: “We are hearing from factory owners in Bangladesh that because of pressure from international purchasers they have had to cancel agreed prices and accept lower ones. Payments have been frequently delayed. And all this pressure has been put on the workers: the women have received their wages with even more delay, and their wages are getting lower.”

Studies show that it is the additional income of women that enables poor families in South Asia to buy sufficient food and send their children to school.

When they lose their income, the consequences are severe, says SEWA activist Renana Jabhvala: “The first effect is the reduced amount of nutritious food that they eat. Another impact is that they take the children out of school, or put them into schools that are cheaper but not so good. Another impact is they go into debt.”

In the past two years, about 100 million more people in South Asia have slid into hunger and poverty because of last year’s food crisis and the global recession.

Gabriele Köhler from the children’s aid organisation UNICEF speaks of a “silent crisis”: “We have paid too little attention to the fact that one third of South Asia’s population is still living in hunger. We call this a silent crisis because of the lack of attention and because many people, the elites as well as those concerned, take this situation for granted.”

Some women activists have asked the governments in South Asia to provide social security for workers in the informal sector. The Indian government recently passed a law to do just that.

The trade union SEWA is also helping women to become more financially independent: it has founded a cooperative bank and encourages its 1.1 million members to put aside money and save enough to help through situations of crisis. It also offers them life and health insurance plans.