German Chancellor Olaf Scholz has said Germany "stands close by" Ukraine's side amid fears of a Russian attack. However, his visit came amid questions over the real extent of Germany's support. 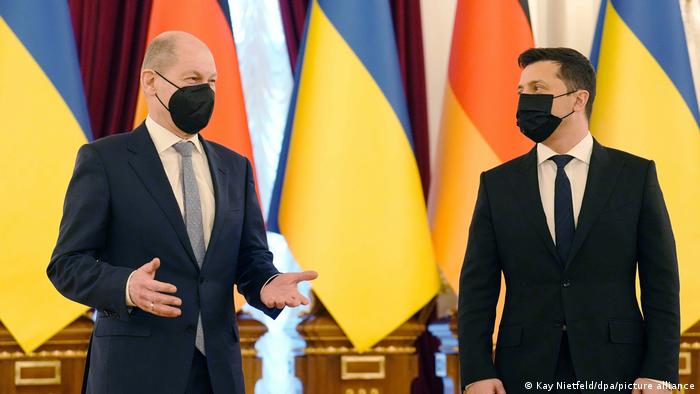 "Germany stands close by your side," Scholz said at a press conference after the talks. "My country is impressed by the democratic movement in Ukraine and supports the European path it has taken since 2014."

Scholz has held firm on Germany's opposition to sending lethal weaponry to Ukraine amid a massive Russian troop buildup.

However, the chancellor pointed out that Germany has already given large amounts of financial aid to Ukraine, to help ward off what he called "foreign influences." Scholz also announced new loan of €150 million ($170 million) to Kyiv.

On Tuesday, Scholz is in Moscow for talks with Russian President Vladimir Putin. The chancellor said he would "underscore" to Putin the heavy consequences of any invasion, adding that the West was ready to impose "very far-reaching and effective sanctions."

At the same time, he said Germany was "ready for serious dialogue with Russia" over European security.

"There are no good reasons for the activities on the Ukrainian border," Scholz said. "The sovereignty and territorial integrity of Ukraine is not negotiable. We expect Russia to take clear steps to resolve the situation." 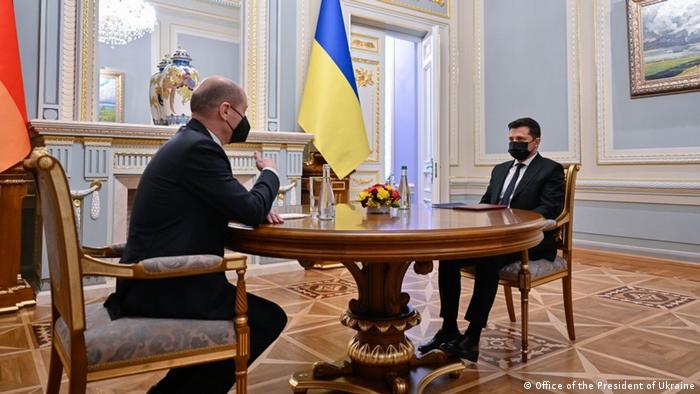 Speaking of Russian demands that NATO should deny membership to Ukraine, Scholz also said that as the alliance was not currently in accession talks with Kyiv, it was strange that Russia should raise the issue.

In earlier remarks at the press conference, Zelenskyy said his country was still seeking membership in the alliance.

"We understand that NATO membership would ensure our security and our territorial integrity," he said.

The Ukrainian president also touched on the issue — sensitive for Germany — of the Nord Stream 2 pipeline, conceding there were differences in assessments of the project between Kyiv and Berlin.

"We clearly understand that it is a geopolitical weapon," Zelenskyy said.

The pipeline, which has not yet gone into operation, is meant to carry Russian gas to Germany, bypassing Ukraine, which would lose the transit fees it would otherwise receive. The project has come under criticism from a number of countries, notably the US, for giving Russia too much control over the European energy market.

Germany has shown some hesitancy about making the pipeline any part of a sanctions package against Russia, should it invade Ukraine.

DW correspondent Michaela Küfner, who is accompanying Scholz on his trip, said Zelenskyy had voiced gratitude for German support, but said there was continuing criticism over the fact that Germany will not deliver arms to Ukraine.

She described Scholz's advisers as being "modest" about what they think can be expected from the chancellor's visit to Moscow on Tuesday.

Before the beginning of his trip, the chancellor described the situation at Ukraine's borders as "very serious," as Russia amasses troops amid fears of a possible invasion.

Scholz on Sunday urged Moscow to de-escalate the Ukraine standoff and warned Russia faces sanctions "immediately" if it invades its neighbor.

Russia has amassed more than 100,000 troops on Ukraine's borders. Currently, the country is also conducting naval drills in the Black Sea and military exercises in Belarus along Ukraine's northern border. However, the Kremlin has said it has no intention of invading Ukraine.

Several countries, including Germany, have advised their citizens to leave Ukraine.

DW's Kyiv correspondent Nick Connolly said there had been a lot of criticism of Germany amid the crisis, both for its stance on Nord Stream 2 and its refusal to deliver lethal weapons to Ukraine.

"With no sign for now that Germany is prepared to give any ground either on weapons or on Nord Stream 2, Olaf Scholz has his work cut out convincing his Ukrainian hosts that he has their interests at heart and that they can trust him to negotiate a way out of this crisis when he goes to Moscow," said Connolly. 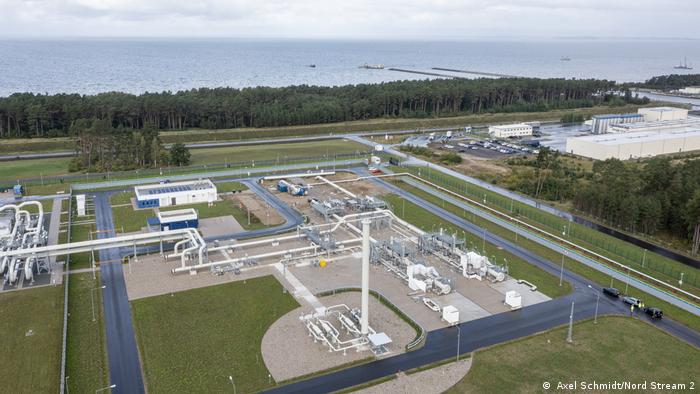 In an apparently scripted exchange broadcast on television a day before Scholz's visit, Russian Foreign Minister Sergey Lavrov on Monday said he had urged Putin to persist for now with diplomacy in Moscow's bid to gain security guarantees from the West.

Lavrov said the US had made concrete proposals on how to reduce military risks, though stating that the proposals from the EU and NATO remain unsatisfactory for Moscow.

Putin asked Lavrov whether an agreement with the West over Russian security concerns was still possible.

"We have already warned more than once that we will not allow endless negotiations on questions that demand a solution today," Lavrov said. However, he added, "there are always chances ... it seems to me that our possibilities are far from exhausted."

Ukraine crisis: What can the US expect from Germany?

With Russian forces massing on Ukraine's border, the White House has sharpened its rhetoric. What can Germany bring to the table? From Washington, DW correspondent Oliver Sallet analyzes the situation.

Russia's military buildup on its border with Ukraine has prompted the world's largest regional security organization to suggest war is possible. Kyiv has called for patience while Moscow says time is running out.