Germany's prettiest cow has died at the age of 13. Lady Gaga— a star of German cattle contests with a string of accolades to her name — was described by her owner as a "once-in-a-lifetime cow." 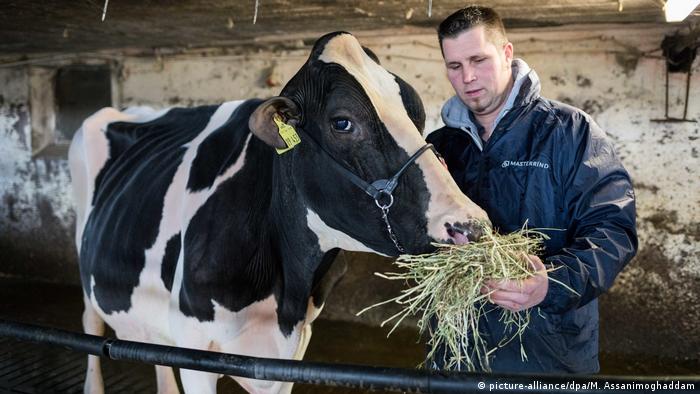 Holstein dairy cow Lady Gaga, the winner of a string of bovine beauty contests in Germany — has died at the age of 13, her owner said on Friday.

She became something of a star of Germany's dairy sector, having won more than 20 titles at national and international levels since her first competition back in 2013.

The trade journal Milchrind mourned the passing of the cow after a short illness, describing her as "an icon of the showring."

"She was successful in a way that no cow was before," the journal effused.

Born in France, she spent her adult life on a farm in Oldenburg, Lower Saxony.

Although she started her cow-walk career relatively late, the cow more than held her own against younger rivals and only lost her title as Germany's Grand Champion dairy cow in March this year.

Lady Gaga had eight calves in total and produced more than 120,000 liters (31,700 gallons) of milk. She died peacefully in her stall.

Bavarian cow freed from bridge after wanting more from life

A cow in southern Germany, disillusioned with the simple life of the herd and "looking for a change," decided to forge its own path. But that adventurous spirit put it in a precarious situation on a bridge near Austria. (29.05.2018)

Farmers have always received aid, even to help hedge against weather-related risks. But now they are calling for more money because of the European heat wave and that, says Henrik Böhme, is unfair on other companies. (01.08.2018)