Is the sound of cowbells just a part of life in Bavaria? A Munich court has ruled against a couple living in a Bavarian village, who complained about dung, insects, and noise caused by a herd of cows near their house. 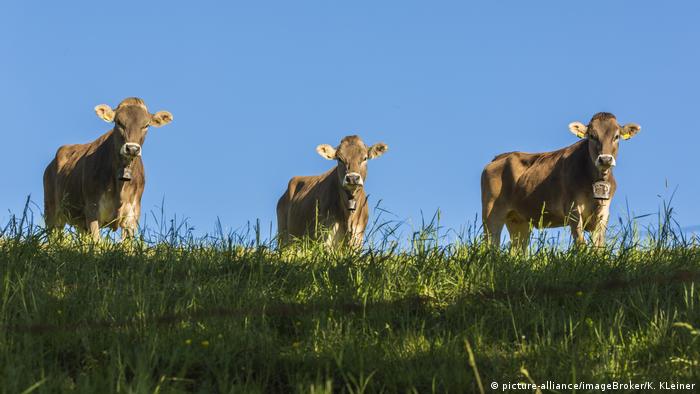 A German court threw out a complaint filed by a Bavarian couple over noise pollution caused by cows on Wednesday. The ruling is only the latest turn in the widely publicized legal saga which prompted a debate about Bavarian identity.

The trouble started in 2014, three years after the married couple took ownership of a house near a dairy farm in the rural village of Holzkirchen, some 34 kilometers (21 miles) south of Munich. The two complained to their neighbor, Regina Killer, about the cowbell noise, the smell of cow dung, and insects coming from her meadow outside their house. The plaintiffs' names were not made public.

According to the couples' lawyer, the cowbell noise reached 70 decibels (comparable to a vacuum cleaner) in their bedroom, according to the DPA news agency. The plaintiffs claimed the noise was causing them depression and sleeping disorders, and also bringing down their property value.

In 2015, the couple and the dairy farmer agreed to have the cows graze only at specific areas of the meadow, keeping at least 20 meters (65 feet) from the house, according to Der Spiegel magazine. However, the couple later claimed the sound of cowbells was still unbearably loud.

Both the husband and the wife filed separate lawsuits to combat the issue before the first-degree court in Munich. Both of those lawsuits were defeated. The husband then brought the dispute before a higher court, which threw out his complaint on Wednesday. The wife's plea is still due to be considered before the second-degree court.

Arguments presented during the trials echoed across Bavaria and the whole Germany, as a neighborly dispute over cowbell noise turned into a debate about Bavarian traditions and clashing cultures.

"What is at stake is whether cowbells can be considered an appropriate part of agriculture in our region," Holzkirchen mayor Olaf von Löwis was quoted as saying by the Irish Indepenent in December.

The farmer, Regina Killer, has argued that cowbell noise was soothing and part of living in the country. She also said that the cowbells are needed to keep track of the animals in case they break through the fence. The woman rejected the suggestion of equipping the cows with a modern GPS tracker instead of a traditional cowbell, saying there was not enough experience with this technology in the region.

In turn, the neighbors claimed there was no need for cowbells with cattle grazing in an enclosed area, and pointed to many modern dairy farms that do not use them.

Following the Wednesday ruling, the head of Bavarian state parliament Ilse Aigner said she was happy about the decision.

"This is about the newcomers and long-time residents living together," she wrote on Twitter. "Cows with cowbells on a meadow belong to our lifestyle!"