Bavaria′s runaway cow Yvonne has returned | Germany| News and in-depth reporting from Berlin and beyond | DW | 02.09.2011

Three months after ditching her farmer owners, fleeing into the Bavarian forests, causing a near-collision with a police car and sparking a 10,000-euro international cow hunt, the dairy cow Yvonne has returned. 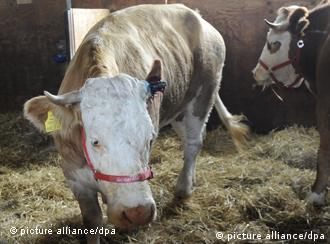 The Bavarian cow named Yvonne, whose escape from a farm in May launched a 10,000-euro international cow hunt, has turned up again, reports said Thursday.

The Austrian animal sanctuary Gut Aiderbichl, which bought Yvonne from her former owners while she was missing because her life was in danger, said a farmer had found the cow near the German alpine town of Mühldorf in southeastern Bavaria. One of the sanctuary employees positively identified Yvonne thanks her ear tag.

The six-year-old brown dairy cow escaped from her farm in May, eventually escaping into the nearby forests.

The national daily tabloid Bild posted a 10,000-euro ($14,000) reward for Yvonne last month after authorities gave hunters permission to shoot the cow on sight. Yvonne had run across a forest road in front of a police car and was deemed a danger to the public.

The reward pushed the cow-hunt back into headlines and prompted locals to join the search. After purchasing Yvonne, Gut Aiderbichl took the lead in trying to find her.

The local council in Mühldorf said in a statement that Yvonne "apparently got tired of the loneliness" and jumped over a fence to join a group of farm cows. It added that she was grazing peacefully as her owners were on their way to pick her up.

A runaway cow known to her pursuers as Yvonne has continued to evade authorities after months on the run. Germany's leading tabloid newspaper has offered a reward for her capture and hunters are out in force. (17.08.2011)

Heidi the cross-eyed opossum, Germany's newest animal celebrity, will take on a new role predicting this year's Oscars winners. US television bosses hope she can emulate the success of World Cup oracle Paul the Octopus. (12.02.2011)