Opinion: The German farmers who moan until the cows come home | Business | Economy and finance news from a German perspective | DW | 01.08.2018

Farmers have always received aid, even to help hedge against weather-related risks. But now they are calling for more money because of the European heat wave and that, says Henrik Böhme, is unfair on other companies. 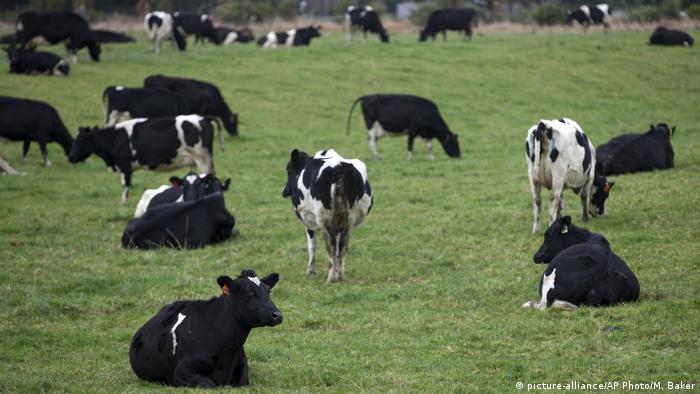 First and foremost, I have great respect for the work of farmers in this country. They do not know what a vacation is, their daily routine is set by the weather, the ripeness of the grain or the cow that decides to calve on a Sunday morning at five o'clock.

But I also respect those who make cars on assembly lines in Wolfsburg, Zuffenhausen and everywhere in between. Not to mention the countless small, often unknown, companies, which day in, day out make all sorts of products that you and I rely on.

This is the way that an economy really works — with resourceful entrepreneurs not afraid to take risks, who find creative solutions in bad times. Unperturbed by bureaucracy they say: We'll handle it!

And in most cases German farmers are just such types and are handling it! But they also have four natural enemies: spring, summer, fall and winter. And they're already getting a lot of money from taxpayers for their daily battles against these enemies — heat, bad weather, snow, frost or endless rain.

One such a beneficiary is the billionaire Günter Fielmann. Germany's optician king sells not only glasses, but is also an eco-farmer. In 2016 he received €236,000 for "risk protection" and around €283,000 for organic farming.

Now, not every farmer casually sells eyewear and is also a billionaire, but what does this example show us? That farmers are already getting money to be reasonably well prepared for natural risks.

Instead of immediately calling for billions in aid, why don't German farmers first ask what they could have done better to survive such a hot spell? When I drive through the country, I often see gigantic fields with monocultures: rapeseed or corn. Corn cultivation is extremely water intensive, and what about all the corn? It is mainly hacked into pieces and used to produce energy in biogas plants.

This spring, farmers had a completely different problem, especially in the northwest of Germany since their fields were completely under water due to weeks of rain and were no longer accessible. Since the manure from the dairy cattle sheds could no longer be brought to the fields, farmers even dug extra pits and laid foil to temporarily store it. Incidentally, the fields were also under water because the soil was leached by the extreme concentration brought about by focusing on monocultures and the rainwater could no longer be absorbed.

Back to the happy cow?

Agriculture in Germany (like in other countries) is now highly productive and in most cases has turned into a gigantic industrial machine. If a single company can kill 20,000 pigs in a single day, does that have anything to do with agriculture? I will admit that I do not always buy organic meat and organic vegetables. But couldn't farmers go back to more environmentally friendly farming?

At school and in my grandfather's garden, I learned something about crop rotation. I admired my grandmother, who still kept cows and pigs herself. The slaughter festival was a highlight of village life. But maybe I see it all too romantically.

So, targeted aid for the farmers who really need it urgently? Ok. But does it have to be a billion euros, like the president of the farmers' association has demanded? A few years ago, when Germany was plagued by a similar heat wave, €72 million was enough for 12,000 affected businesses. And what if tomorrow's smart entrepreneur is on the mat asking for financial help because, say, he's somehow affected by a US trade dispute and his business is broke? What, dear farmers, would you tell him?

Workers and farmers who supply food to German supermarkets often face abuse and exploitation, Oxfam has said in a report. When it comes to fair trade, German retailers rank worse than their UK or Dutch counterparts. (21.06.2018)

Sections of Germany's concrete motorways have broken apart after several days of hot weather. Without further investment, these roads stand little chance of weathering the effects of global warming. (02.06.2018)

Germany has experienced its hottest May and April since the late 1800s. The German Weather Service said the blazing temperatures could only be understood in relation to climate change. (04.06.2018)