In a marathon day of talks in Paris and Brussels, Olaf Scholz aims to lock down a common strategy with leaders regarding the urgent issues facing the bloc. It's his first trip abroad as German chancellor.

German Chancellor Olaf Scholz headed to Paris and Brussels on Friday for talks with French and European Union leaders, as the bloc faces a growing list of foreign policy crises.

With the 27-member bloc confronted with growing tensions on the Russian-Ukrainian border, negotiations on reviving the Iran nuclear deal, as well as divisions over the Nord Stream 2 pipeline and relations with China — Scholz is looking to hammer out a unified EU strategy, as France prepares to assume the six-month rotating Council presidency.

Scholz: 'German politics has to take on a role of responsibility'

Normandy format back on the table

First on the menu was how to deal with Russia, as tensions endure over Moscow's military presence near the border with Ukraine.

Scholz said: "It's very clear that Germany, the European Union and many other countries would react if border violations occurred."

But Scholz wanted to hold out an olive branch as he called for renewed diplomatic efforts, starting with fresh four-way talks with Russia.

"We have a good basis that needs to be revived — for example the talks in the Normandy format," Scholz said in a joint news conference with Macron, referring to discussions between Germany, France, Russia and Ukraine aimed at solving the crisis.

Repeated US warnings about the build-up of Russian troops near Ukraine's border have highlighted the scope for redoubled diplomatic efforts to calm the conflict in Ukraine's east. Moscow denies having any intention of invading its neighbor, "unless we're provoked by Ukraine, or by somebody else," according to Russian deputy ambassador to the UN Dmitry Polyansky.

Macron expressed a need to "avoid any unnecessary tension," as he warned of "self-fulfilling" prophecies over the issue.

"What we all want, Europeans and Americans, is to show that we are paying close attention to the situation." 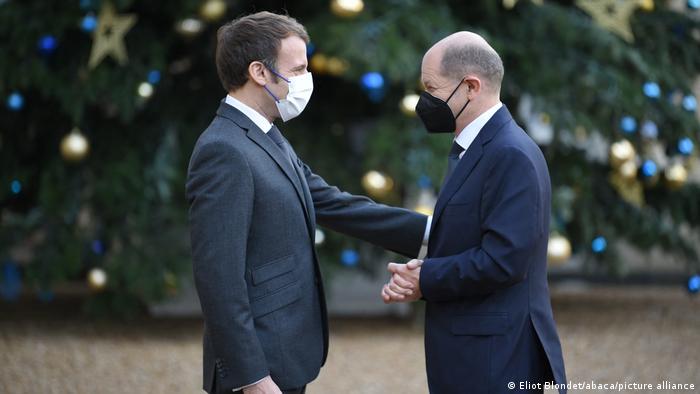 Germany and France on the same page

Echoing the sentiments of his French counterpart, Scholz said he was keen to "make Europe strong and sovereign," regarding "economic, security and foreign policy issues."

"It is important that we act in the same direction."

And Macron spoke of a "convergence of views" as he said the pair had "demonstrated the will to work together."

Besides a long list of topics and urgent challenges, the visit is also an opportunity for Macron and Scholz "to get to know each other better," said DW correspondent Barbara Wesel.

"This is the crucial relationship in Europe — the president of France and chancellor of Germany have to work together, or everything fails," she noted.

"It is important that Europe stands together and that we cooperate closely," Scholz said after arriving in Brussels.

Von der Leyen said she welcomed the opportunity to work with her compatriot after serving alongside Scholz in the grand coalition of his predecessor, Angela Merkel, before she became Commission president towards the end of 2019.

Scholz now heads a three-way coalition of his Social Democrats (SPD), the Greens and the Free Democrats (FDP).

Von der Leyen struck a sterner tone than Macron, though, when it came to the topic of Russia.

"Aggression must have a price tag," she said, without elaborating. "Therefore, we will communicate these points in advance in an appropriate form to Russia."

The Nord Stream 2 pipeline, a project to deliver natural gas from Russia directly to Germany, bypassing pipelines in Ukraine and eastern Europe, could play a major role in pressuring Moscow. Von der Leyen, though, stopped short of suggesting a ban on the operation would be an appropriate measure.

"In general, it is important that energy should never be used as a means of exerting pressure and that the energy security of Europe and its neighbors must be guaranteed," the top EU official said.

"NATO's relationship with Ukraine is going to be decided by the 30 NATO allies and Ukraine — no one else," Stoltenberg said, in reference to Russian pressure to formally rescind a long-term conditional offer of membership to Kyiv dating back to 2008. "We cannot accept that Russia is trying to re-establish a system where big powers like Russia have spheres of influence, where they can control or decide what other members do."

Tackling the ongoing challenges posed by the coronavirus pandemic as well as measures to combat climate change are also on Scholz's agenda, both in Paris and in Brussels.

Scholz is also expected to set out Berlin's stance on China and Russia — which are two potential points of friction with Macron and other EU leaders.

Scholz was guarded on the subject of China on Friday and declined to say whether Germany would join a diplomatic boycott of the 2022 Winter Olympics in Beijing. "We are still looking for talks with many others because we want to act in a coordinated manner here," he told reporters. Macron has already announced France would not be joining a diplomatic boycott of the event.

Franco-German relations in the post-Merkel era

Why is the trip so significant?

In choosing Paris as his first port of call as chancellor, Scholz is following in the footsteps of other German leaders.

Angela Merkel, Gerhard Schröder, Helmut Kohl and Helmut Schmidt all made a point of visiting France first after becoming chancellor. Franco-German reconciliation and friendship in the aftermath of the two world wars have become a core pillar of German foreign and European policy.

In his capacity as Germany's finance minister under Merkel, Scholz is no stranger to high-level talks with leaders in the EU and beyond.

While Scholz's foreign policy goals within Europe appear to be consistent with those of Angela Merkel — namely strengthening the EU on the global stage and maintaining close cooperation with the United States — officials and analysts will be watching closely to see where the new chancellor could potentially deviate.

Scholz speaks with Biden by phone

"Today, I spoke with German Chancellor Olaf Scholz to congratulate him on his appointment," Biden tweeted.

"I look forward to working closely together on the full range of global challenges, including transatlantic efforts to address Russia's destabilizing military buildup," the US leader added.

The EU has promised investments tied to values like transparency and good governance in Southeast Asia, where China already has a big footprint and doesn't ask authoritarian governments to change their ways.