Germany's Social Democrats (SPD) have pushed for a common policy on relations with Russia. Several center-left lawmakers have voiced their irritation over Foreign Minister Heiko Maas' harsh criticism of Moscow. 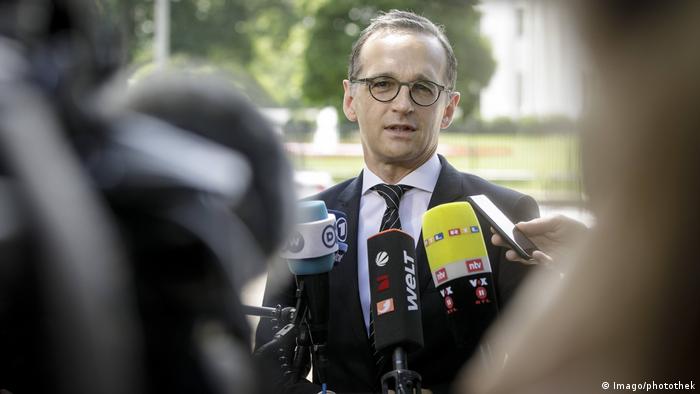 Frictions among Germany's Social Democrats (SPD) were brought to the fore on Monday, as the party's federal executive committee met in Berlin on Monday to discuss the party's policy line on Russia.

Ahead of the meeting, several senior SPD lawmakers voiced their irritation over Germany's top diplomat and SPD lawmaker Heiko Maas and his chiding rhetoric on Russia.

SPD General Secretary Lars Klingbeil stressed that relations between the two countries were "of the highest importance" for the party.

Several lawmakers in the SPD continue to subscribe to former Chancellor Willy Brandt's policy of rapprochement with the former Soviet Union, otherwise known as "Ostpolitik." The center-left party still enjoys relatively strong levels of support in the former East German states, where strong ties to Russia continue to be felt to this day.

Since taking over the reigns of the Foreign Ministry some 10 weeks ago, Maas has accused Moscow of "increasingly hostile behavior," particularly over its actions in Syria where it continues to prop up the regime of Syrian President Bashar Assad.

Maas was also quick to point the finger at Moscow for alleged interference in western elections, last year's cyber attack on the German government's computer network, and the poison attack on ex-spy Sergei Skripal and his daughter Yulia in Salisbury, England.

Maas' chiding rhetoric marks a major shift from his predecessor Sigmar Gabriel, who before leaving office had called for sanctions on Russia to be eased, provided Moscow worked towards a peaceful resolution to the conflict in eastern Ukraine.

Maas attended the meeting on Monday but declined to comment afterwards. Klingbeil said that the party had given the foreign minister "clear support to step up efforts to pursue dialogue with Russia."

Saxony's state chairman Martin Dulig, who was one of the critics of the Maas stance on Russia, said after the meeting: "I am satisfied that Heiko Maas is taking these steps to push forward the dialogue, and I hope that this dialogue really will move forward."

Maas: 'We will keep up the political pressure on Russia'

Nechayev pointed to Maas' first official visit to Moscow earlier this month, where he and his Russian counterpart Sergey Lavrov both called for the nuclear deal with Iran to be upheld.

Maas and Lavrov made a number of agreements that "followed the best traditions of our bilateral relations," Russia's ambassador stressed. "As for the visit, I can say quite clearly that it was constructive and substantial and no terms such as hostility or opposition were used."