Russia should influence Iran to stick to terms of the nuclear deal, German Foreign Minister Heiko Maas said during his first official visit to Moscow. Both Germany and Russia believe the deal should remain in force. 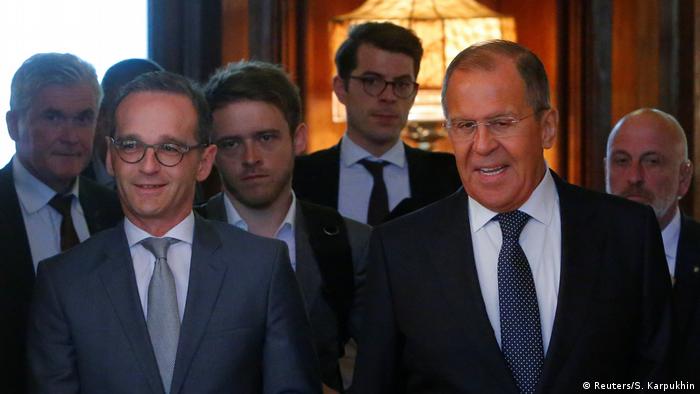 Germany's top diplomat Heiko Maas and his Russian counterpart Sergey Lavrov both called for the nuclear deal with Iran to be upheld on Thursday, during Maas' first official visit to Russia. The appeal marks a rare moment of unity between Moscow and Berlin just days after US walked out on the 2015 accord.

In Moscow, Maas urged Russia to influence Tehran and make it stick to the deal, which aims to limit Iran's alleged pursuit of nuclear weapons. The German foreign minister also said he was seeking details from the US on its plans for future sanctions against Iran.

US President Donald Trump has shrugged off pressurefrom allies to keep the deal in place and called the accord "defective at its core." However, leaders of the UK, France, and Germany all contacted Iranian President Hasan Rouhani in the attempt to salvage the accord.

Germany's Chancellor Angela Merkel called Rouhani on Thursday to reaffirm Germany's commitment to the deal "as long as Iran continues to fulfil its obligations," said Merkel's spokesman Steffen Seibert. Merkel also said she was ready to negotiate about Iran's ballistic missiles and involvement in Syria and Yemen.

Angela Merkel is also set to visit Russia next week.
Read more: Is it time for Germany to revisit its Russia relationship?

Visiting Moscow on Thursday, Germany's top diplomat Maas suggested reviving the peace talks between Germany, France, Ukraine and Russia on the conflict in eastern Ukraine. Lavrov responded by saying Russia was "ready to consider" this offer.

Maas also called for "honest dialogue" with Moscow and for Russia to be included in global diplomacy, despite its differences with Berlin. Maas admitted that the conflict in Syria "cannot be solved without Russia."

The German diplomat also laid a wreath at the Tomb of the Unknown Soldier in Moscow, which is dedicated to the Soviet soldiers killed during World War II.

Lavrov said on Thursday that he "appreciated" Maas' traveling to Russia so soon after becoming foreign minister. He said talking face to face was much better than "microphone diplomacy," in an apparent jibe at Maas' comments on Russia in an interview with news magazine Der Spiegel.

Maas has struck a more forceful tone on Russia than his predecessor and fellow Social Democrat, Sigmar Gabriel.

In the Spiegel interview, he has called Russia an "aggressor" and accused the Russian government of being "increasingly hostile," which has been met with criticism from his SPD party.

The EU and the US have imposed wave after wave of sanctions on Russia since the beginning of the Crimea crisis in 2014. However, the Kremlin is sticking to its course and Vladimir Putin's power has only grown. (05.04.2018)

Foreign fighters are being sucked into the Syrian conflict. And many who are sent to the frontline are barely out of their teens. DW's Naomi Conrad met one of them. (05.05.2018)

The US president is threatening to pull the country out of the 2015 Iran nuclear accord. DW examines why Trump is considering dropping the deal and who shares his concerns on Iran. (20.09.2017)