German Chancellor Angela Merkel has defended her party's concessions during coalition talks as "painful" but "acceptable." The chancellor also brushed off criticism that she is losing authority among conservatives. 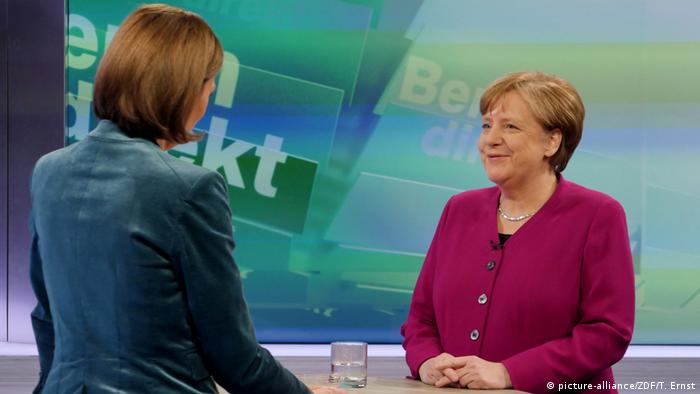 Facing criticism in her own party about the loss of the Finance Ministry to the Social Democrats (SPD) during coalition talks, German Chancellor Angela Merkel defended the decision on Sunday.

In an interview with public broadcaster ZDF, Merkel described giving up the Finance Ministry as "painful," but said it would have been "irresponsible" to let coalition talks fail over how to divvy up Cabinet positions.

The decision was not ideal for her Christian Democratic Union (CDU), but "acceptable," she said.

It was Merkel's first interview since her center-right CDU and its Bavarian sister party the Christian Social Union (CSU) agreed to a coalition deal with the center-left SPD on Wednesday.

The Finance Ministry will reportedly be headed by current Hamburg Mayor Olaf Scholz, who said on Saturday that Germany shouldn't dictate economic policies to eurozone partners. The coalition deal also saw the previously CDU-held Interior Ministry head to the CSU, where party leader Horst Seehofer will reportedly take the lead.

'I understand the disappointment'

With many in the CDU unhappy about the loss of the key Finance Ministry, previously headed by EU austerity advocate Wolfgang Schäuble, Merkel said the criticism was not a sign that her authority in the party was declining.

"I understand the disappointment," Merkel said. She made clear, however, that she would not be stepping down from her role as party leader — or chancellor.

"For me, these two offices belong in one hand in order to be able to lead a stable government," she said, adding, "It will stay that way."

Merkel, who has been Germany's chancellor since 2005, also vowed to serve another full four-year term.

During the interview, Merkel noted that she wanted younger members of the CDU to fill the open posts in the Cabinet.

"Now we need to show that we can start with a new team," she added. "We have six ministerial posts to fill and, from my point of view, we need to ensure that not only the over-60s are considered but also younger people."

The names of the CDU politicians who will fill the empty ministry posts will be announced by February 26, when party delegates meet to decide on the coalition deal.

The deal also faces a critical test from the SPD's 463,723 party members who are voting to accept or reject the deal. The results of the postal ballot will be announced on March 4.

The renewal of the right-left alliance that has ruled Germany since 2013 has sparked a fierce debate within the SPD. Following internal party backlash over current SPD leader Martin Schulz's attempt to become Germany's next foreign minister, Schulz announced on Friday that he was abandoning his bid for the post.

Merkel's standing in her party was weakened following last September's general election which saw the far-right Alternative for Germany (AfD) snag votes away from all of Germany's major parties.