Pope Francis has backed German Chancellor Angela Merkel's fight against climate change during a private audience in the Vatican. The pope also welcomed Merkel's decision to emphasize Africa at the upcoming G20 summit. 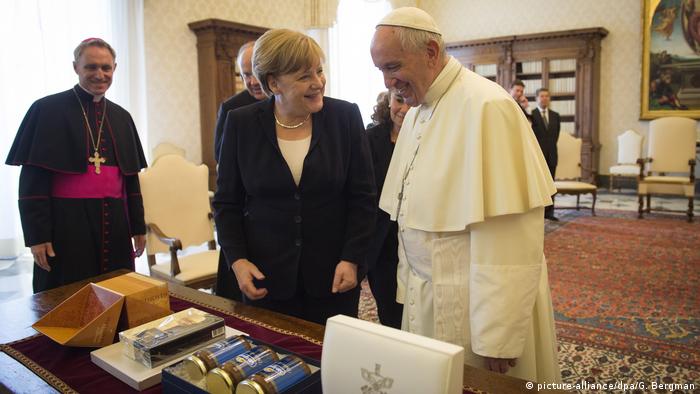 German Chancellor Angela Merkel began her visit to Argentina with a speech at a synagogue in Buenos Aires. DW's Michaela Küfner described the background to the Latin American trip. (08.06.2017)

German Chancellor Angela Merkel stressed the importance of international cooperation following a meeting with Pope Francis in the Vatican on Saturday.

"I am grateful that I can be here again," Merkel said smiling as the two met for the German leader's fourth private audience with Francis.

Merkel said she felt strengthened in her positions on combating poverty in Africa and climate change after speaking with Francis.

"He encouraged me to continue on this path," the German leader said, adding that he was also supportive of the pursuit of international agreements."

Francis received Merkel in his private library, presenting her with a medal with an olive branch to symbolize "the work you do for peace," he said.

The German leader did not come empty-handed to the meeting, bringing the collected works of Beethoven and a sweet spread called "dulce de leche" from Francis' home in Argentina, which she recently visited. 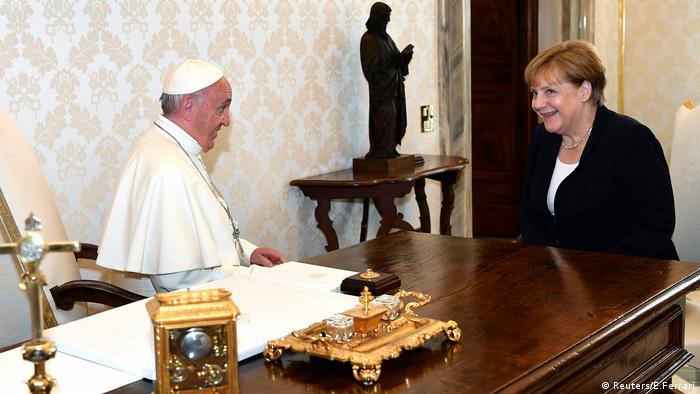 During their 40-minute meeting, Francis and Merkel discussed climate change, African policy and the commitment to peace and fair trade.

"These questions are not merely an abstract concern for Francis; he is personally involved," Germany's ambassador to the Vatican, Annette Schavan, told the Passauer Neue Presse newspaper on Saturday.

International cooperation to combat climate change is likely to be one of the main topics for the upcoming July 7-8 Group of 20 (G20) summit in Hamburg, particularly following US President Donald Trump's decision to pull out of the Paris Accord. Francis is a vocal campaigner on environmental issues.

Merkel's last private audience with the pope was in May last year when Francis was presented with Germany's prestigious Charlemagne Prize for work done in the service of European unification and peace.