Germany's Cabinet has wrapped two days and talks about the war in Ukraine and its impact on the German economy. The government warned that a planned EU oil embargo could cause supply problems and even higher inflation. 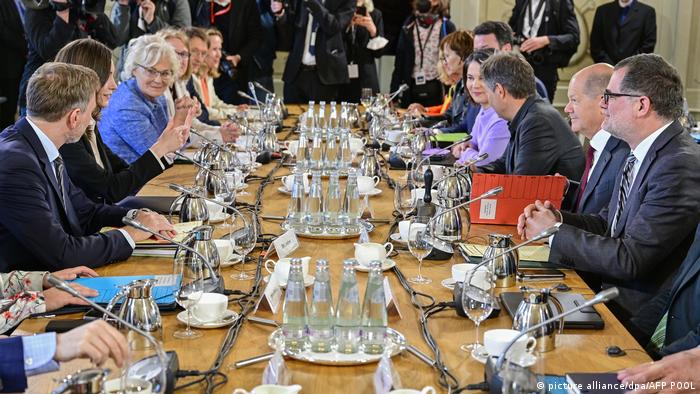 A two-day closed-door German Cabinet meeting ended on Wednesday as Berlin seeks to counter criticism of its policy on Russia's invasion of Ukraine.

Leaders of the parties that make up the German government outlined their dicussions in a press conference.

They underlined support for an EU embargo on Russian oil, but also warned that there could be consequences when it came to supply and prices.

Economy Minister and Vice-Chancellor Robert Habeck said a gradual EU ban on Russian oil imports could lead to supply "disruptions." He said there may also be price increases, but still backed the measure as necessary.

"I have said a few times that we can of course not guarantee in this situation that there won't be disruptions, primarily regional disruptions," Habeck told reporters.

Chancellor Olaf Scholz, who has been more cautious than other Western leaders in backing Ukraine, faces growing pressure to take a firmer line, including from within his own three-way governing coalition.

Appearing alongside Habeck, Scholz said Russian President Vladimir Putin had miscalculated with his war against Ukraine.

The chancellor said Putin was now facing a stronger and more united NATO and EU, rather than a weakened one. He also said the Cabinet had discussed legislation to speed up the development of Liquefied Natural Gas and that this would be put forward by early next week.

Also speaking at the press conference, Finance Minister Christian Lindner said new sanctions had been discussed, including whether those on sanctions lists should make their assets public.

Scholz is still under pressure to do more and has been criticized for not visiting the Ukrainian capital, Kyiv, in a show of solidarity for the country.

The chancellor has ruled out making a trip in the near future, citing the Ukrainian leadership's decision last month to disinvite German President Frank-Walter Steinmeier, a fellow Social Democrat.

In the press conference, Scholz said there was a "problem" in Germany's relations with Ukraine after the German president was stopped from visiting Kyiv last month.

Ukraine has criticized Steinmeier, claiming that he failed to heed the threat posed by Russia during his time as German foreign minister. Ukraine's ambassador in Berlin, Andriy Melnyk, criticized Scholz's reasons for not making the visit, saying it was "not very statesmanlike."

Friedrich Merz, leader of Germany's opposition Christian Democrats who lost power in last September's election, visited Kyiv and the nearby bombed-out town of Irpin on Tuesday. He said he would report his findings from the trip back to Scholz.

The key topics of the two-day meeting were the war in Ukraine and the German economy.

Germany has changed tack on its previous policy of not shipping weapons to combat zones by sending weapons to help Ukraine in its fight against Moscow's forces.

Last week, Berlin also said it would allow the delivery of heavy weaponry in the form of Gepard anti-aircraft tanks.

On Monday, leading members of the government said Germany was prepared to support an EU embargo on Russian oil.

Earlier on Wednesday, European Commission President Ursula von der Leyen announced a plan for a complete ban on Russian oil imports. Crude oil supplies would be phased out within six months and imports of refined products by the end of the year.

Finnish Prime Minister Sanna Marin and her Swedish counterpart Magdalena Andersson joined the Cabinet for their talks on Tuesday.

German Chancellor Olaf Scholz told both that he would support their countries' application to become members of the NATO alliance.