Germany's environment agency has called for the government to bring in a raft of measures to limit carbon emissions from road traffic. Among the proposals are speed restrictions on Germany's autobahns. 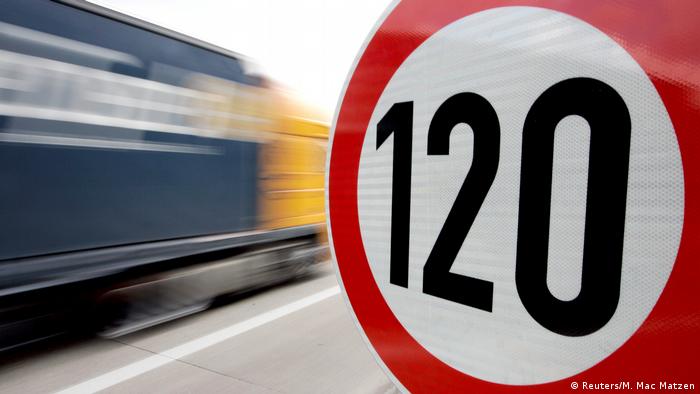 The idea is included in a package of measures put forward to reduce carbon emissions from private vehicles on German roads.

Germany's Süddeutsche Zeitung on Thursday cited an internal document from the agency that urges drastic action to meet the country's climate targets.

Among the proposals is the introduction of a maximum speed limit of 120 kilometers per hour (75 miles per hour) for vehicles on all German highways.

Such restrictions would likely spark huge controversy. At present, there are no official speed limits on certain stretches of road and drivers regularly hurtle along at speeds of more than 200 kph.

The unpublished policy paper also envisages a steep rise in tax on diesel — currently taxed at a lower rate than ordinary gasoline — of €0.70 ($0.78) per liter by the year 2030. Such a rise would represent an increase of almost 60%. Petrol would rise by €0.47.

Proposals also include a sharp increase in road tolls for heavy goods trucks, and an abolition of the country's "commuting allowance," which allows people traveling longer distances to work by car to claim tax rebates.

Germany could face EU penalties if it fails to reduce greenhouse gas and poisonous nitrogen oxides emissions. Observers consider the transport sector as a key to meeting emissions reduction targets.

According to the document seen by the newspaper, those goals were "ambitious but feasible."

No desire for limits

In November, the Netherlands cut the daytime speed limit for traffic in the daytime to 100 kph, in an effort to tackle an emissions pollution crisis and improve air quality.

The German government has already said it has no plans to introduce a speed limit on Germany's autobahn network. That came after a government-appointed commission on the future of mobility suggested an upper speed limit of 130 kph.

And in October, German lawmakers overwhelmingly voted against a Greens proposal to impose speed limits.

A survey suggests most drivers don't share Transport Minister Andreas Scheuer's view that autobahn speed limits are against "common sense." Proposals to impose a 130 kph limit were recently leaked to the media. (27.01.2019)

Speed limits or not, more traffic jams than ever kept drivers from putting the pedal to the metal on the autobahn, Germany's largest automobile club has said. Drivers contended daily with some 2,000 traffic jams in 2018. (17.01.2019)

Why did the ducks cross the autobahn? That's what German police are wondering after a family of waterfowl caused an accident when drivers took evasive action.

A fire at a gas station in the western German state of Hesse has killed two people. One witness heard an explosion before the fire broke out, but the cause remains unclear.