After a historic drop in sales due to the pandemic, retailers say further economic aid is now critical. The shift to online shopping has accelerated during lockdown, leaving Germany's bricks and mortar stores vulnerable. 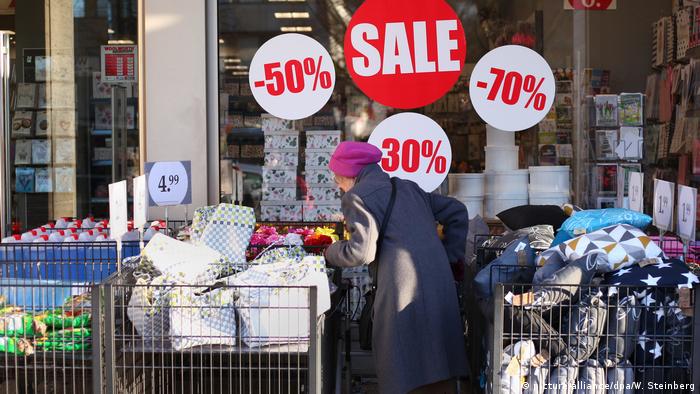 Germany's city centers may be bustling again, but not at the same level as before the coronavirus lockdown. Worse still, early indications suggest people aren't spending with the same enthusiasm. The country's retail sector expects this year's loss in non-food trade to hit €40 billion ($45.6 billion). Sales will end 2020 down 22% compared to last year, according to the German retail federation HDE.

Figures published this week showed clothes and shoe stores were the hardest hit during the stay-at-home orders introduced in March and April, with sales plummeting 65% and 61% respectively. German jewelers and toy stores, meanwhile, saw their revenues cut almost in half.

"Retailers in large city centers that draw a lot of tourists have been affected the most. Asia and Russia's wealthy are missing," Markus Wotruba, head of research at the retail analyst BBE, told DW. He added that Germans are, for the time being, more likely to shop in their immediate vicinity, which has shrunk the catchment area of many regional shopping malls.

Industry experts also note how the pandemic has exacerbated the shift to online retail — a far more advanced phenomenon in the US and where Germany was, until recently, a laggard. Last year, the Amazon effect forced almost 10,000 US retailers into insolvency and the research firm Coresight estimates that the pandemic will have a similar effect. Among the big American names already to file for bankruptcy this year are the department stores JC Penney and Neiman Marcus.

Europe's top economy, meanwhile, has been playing digital catch up with its US and UK counterparts. Until recently, online retail sales in Germany made up less than 10% of the overall retail market, but that share has spiked to almost 14%. In 2019 alone, e-commerce grew nearly 12% to €72.6 billion. While Amazon leads the pack here too, homegrown online brands Otto and Zalando are growing fast.

Wotruba said the pandemic has accelerated the "gradual erosion" of legacy retailers due to consumers' sudden preference for online shopping but that many brands have been "under pressure for a long time." The health emergency has given them a reason to quit with their heads held high, he said. "It's easier to close your business now and to blame it on COVID- 19 than to admit that you would have been out of business anyway."

HDE also foresees a wave of German retail bankruptcies before the end of the year — potentially as high as 10,000 companies, affecting more than a hundred thousand workers. Economic measures by the government have, so far, spared retailers from declaring the inevitable until September at the earliest. They've also been helped by rules preventing landlords from canceling tenancies due to unpaid rents. A second wave of infections and renewed lockdowns would, however, be difficult for many retailers to bear, HDE warns.

The country's biggest department store group Karstadt Kaufhof is, so far, the highest-profile casualty. Last month, it announced the closure of 62 of its 172 stores, as well as 20 branches of the subsidiary Karstadt Sports. Karstadt and Galeria Kaufhof are two brands that have been burned into the collective memory of most Germans. For more than 130 years, they've been a major draw to city centers. The presence of these so-called anchor brands also encouraged shoppers to venture into smaller, independent retailers. In recent years, however, specialist stores — and more recently online shopping — have tempted away all but the giants' most loyal fans. 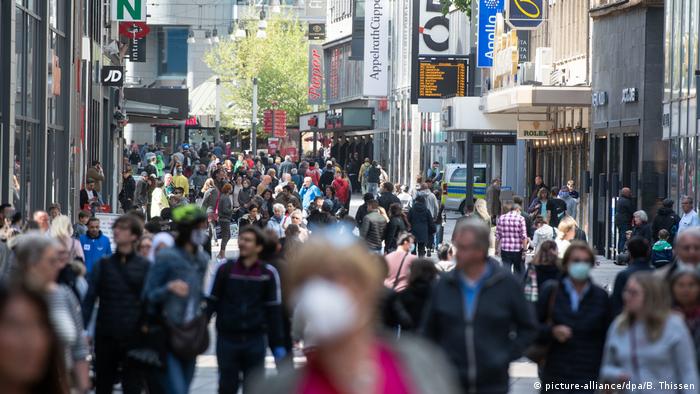 "In large cities, landlords are fine with the [department] store closures because they can then convert these huge properties into residential and office spaces. But in Leverkusen [near Cologne], for example, the Karstadt store is already in a shared building with two residential developments and it will be harder to find a new tenant for the retail space," Christoph Scharff, managing director and head of retail services at BNP Paribas Real Estate, told DW.

The threat of stores lying empty is a cause of great anxiety for politicians at the city and town level, particularly in smaller, less attractive areas, where the closures will have a knock-on effect on all retail activity.

"We see that small and independent retailers who see no successor [to Karstadt moving in] are closing as well, and with so much real estate now available within a short time, our cities will certainly change," said BBE's Wotruba. He thinks the fringes of city centers could be the biggest losers.

The retail crisis is also spurring calls for Germany to drop its strict rules on Sunday trading, along with demands for nationwide and international marketing campaigns, and questions over whether cities will be able to hold their Christmas markets this year.

HDE said on Wednesday that while the government's temporary 3% cut in VAT (sales tax) from 19-16% is welcome, the retail sector urgently requires further stimulus measures, including an extension in protection from bankruptcy, specific aid to help city centers recover from the pandemic and more efforts to spur consumer demand.

As city centers continue to experience a huge upheaval, Scharff from BNP Paribas sees three big trends emerging; the use of big data to better respond to consumers' needs, the transition of city centers toward entertainment and socializing, and the increasing importance of health and wellbeing venues, including gyms, to tempt consumers downtown.

Wotruba sees a time when more stores will exist to showcase products but not necessarily sell them directly. "Some may only be touchpoints or showrooms," he told DW. "In an increasingly fierce marketplace, all stores will need to have a strong and unique selling proposition to stay alive."

Coronavirus may scupper big retail M&A deals in US

During the coronavirus pandemic, US company mergers and acquisitions have been on hold, renegotiated or canceled. In retailing, big names have been involved and some have gone home empty-handed. (25.06.2020)

Germany's shopping streets are starting to fill up once again — but many retailers are afraid they won't survive the crisis. The COVID-19 pandemic has created a huge upheaval in city centers. (15.06.2020)

Everybody in Germany has to wear a nose and mouth mask when they enter a store. The question is: how much longer? Shopkeepers say we cannot go on like this. Germany is a divided country and feelings are running high. (08.07.2020)