At least 6,000 employees could expect to lose their jobs as part of the company's restructuring process. The German chain was hard hit by the coronavirus, with many outlets forced to stay closed. 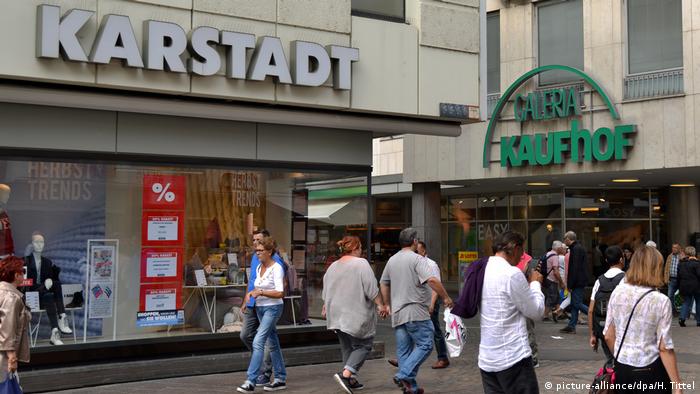 Headquartered in Cologne, the chain made the move after drastic sales losses and as part of an overall restructuring of the firm. The two major high street department stores Galeria Kaufhof and Karstadt, once rivals, merged in 2018 — meaning their branches are often in extreme proximity to one another, as in the scene from Trier pictured above.

According to an agreement reached on Thursday between Karstadt-Kaufhof management, the union, and the works council, affected employees should be able to receive severance packages and can switch to a transfer company for at least six months. However,Verdi said it wanted to stop more branches from closing down.

"We will fight with all our might for the preservation of the locations and the future of employees. The final word has not yet been spoken," said Verdi board member Stefanie Nutzenberger.

In response to the decision, German Labor Minister Hubertus Heil called on the department store giant to refrain from dismissals and not pursue "radical downsizing plans." Instead, Heil urged the company to invest in the preservation of jobs and the future viability of the firm.

Galeria Karstadt Kaufhof said closing more than one third of its department stores is the only way to save the company.

Due to the impacts of the coronavirus pandemic, the affected branches can no longer continue operations, the company announced, adding that doing so would threaten the survival of the entire chain.

The company has been particularly hurt by the recent crisis due to the size of its branches. Under April's relaxation of lockdown measures in Germany, stores with a shop floor of up to 800 square meters (8,610 square feet) have been able to reopen, but given that Karstadt Kaufhof's outlets exceed this measurement, the already ailing business felt it had little option but to implement cuts.

'Attack on all employees'

The downsizing has been heavily criticized by the General Works Council, which called the company's restructuring plans an "attack on all employees."

On April 1, amid the pandemic, the group was granted protection against creditors and part of that procedure meant the organization had to submit a restructuring plan before the end of June. This was considered to be the preliminary stage of insolvency.

However, the number of branches closing down is slightly lower than what was initially expected. The chain had at first signaled that up to 80 stores could be shut down in the course of its restructuring.

The trade union considered it a success that the company's originally proposed reduction of 10% of the jobs in the remaining branches was no longer a part of its plans.

"This is one of the bitterest hours in the history of German retail trade... We are talking about more than 6,000 affected people," said Verdi retail trade expert Orhan Akman.

A slower transition to online shopping means Germany hasn't yet seen the same huge number of store closures as the US and UK. Some top retailers, however, are now feeling the pinch amid a slowing economy. (13.05.2019)

There is no need to panic about coronavirus. But we also shouldn't take unnecessary risks by bringing together tens of thousands of businesspeople from around the world, says Fabian Schmidt. (13.02.2020)