A slower transition to online shopping means Germany hasn't yet seen the same huge number of store closures as the US and UK. Some top retailers, however, are now feeling the pinch amid a slowing economy. 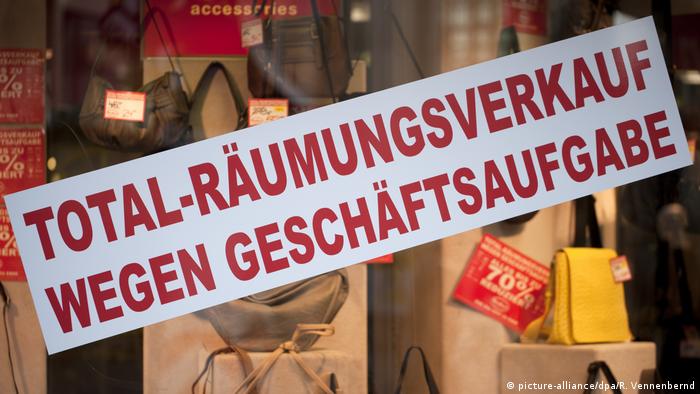 Two years ago, the German retail trade association HDE warned that some 50,000 stores would likely close by the end of 2020 as a result of changing shopping habits.

HDE predicted that Europe's No.1 economy would be hit by the same "retail apocalypse" that forced giant international brands like Sears, Walgreens, Gap and Marks and Spencer to downsize, shutting hundreds of American and British branches and laying off tens of thousands of staff.

In the US and the UK, the sector's decline has driven hundreds more traditional retailers into bankruptcy over the past three years after they failed to cope with the transition to online shopping.

Until now, Germany has been spared the worst of the upheaval thanks to a buoyant economy.

High rates of employment, immigration and rising wages have all boosted consumer spending, allowing traditional retailers to maintain their growth targets. So, not even a quarter of HDE's projected store closures have, so far, taken place.

Surfing in a department store

"While there have been some significant store closings, the apocalypse has not yet happened," Markus Wotruba, a researcher at the Munich-based retail analyst BBE, told DW.

One high-profile casualty is the fashion chain Gerry Weber, which filed for bankruptcy in January. As a result of its  restructuring, 120 German stores are set to close with around 450 jobs lost.

Market pressure also forced a merger last year of department stores Karstadt and Kaufhof. Although the new joint entity has ruled out shutting any stores for now, some 2,600 people will be laid off.

Strong consumer spending may have masked many of the issues facing Germany's retail sector, however the economy is now slowing, prompting several retail analysts to predict a surge in store closures.

Read more: Can Russian discounter Mere beat Aldi and Lidl at their own game?

Among traditional retailers, more than a third expect sales to fall this year, while another third believe sales will stagnate, according to the latest HDE survey. "They're certainly more pessimistic that a few months ago," the trade body's spokesman, Kai Falk, told DW.

On the other hand, online shopping, which makes up just 11% of the total retail market in Germany — compared to 15% in the US and 20% in Britain — is set to continue its strong growth trajectory, climbing some 9% in 2019, according to HDE.

Amazon very much dominates online shopping in Germany along with the local player, Otto. The two account for almost half of the country's e-commerce market, with Zalando, Notebooksbilliger and MediaMarkt making up the rest of the Top 5.

The US e-commerce giant's heavy discounting has forced many of its German competitors into price wars, especially on electronics goods. The impact on revenue has been so significant that Ceconomy, the owner of electronics retailers MediaMarkt and Saturn, was forced to issue three profit warnings last year.

This week, the Dusseldorf-headquartered company went further, announcing a program of deep austerity including job cuts at its head office. Ceconomy's management wants to see their two brands more closely aligned, which some analysts think could mean store closures.

BBE's Wotruba notes that while German consumers are increasingly interested in the lowest possible price, a battle which online retailers often win, the agency's customer surveys found more loyalty among more affluent and conservative buyers, which if utilized well, could continue to favor traditional stores.

No cards, no sale

Weak customer service will increasingly erode that loyalty, he told DW, noting how many legacy retailers in Germany still have "an aversion" to accepting credit card payments.

"Customers do not only shop online because they can; it is more convenient to reach for their cellphone than to cross a street," Wotruba said. Therefore more traditional retailers need to move closer to their customers, in a similar way to supermarkets chains, who have opened mini-marts at busy railway and U-bahn stations.

He predicted that more big-box retailers like IKEA, MediaMarkt and DIY stores would open smaller branches in pedestrian precincts, which could prevent those stores being boarded-up.

Germany's continued urbanization shift means shopping centers in major cities like Berlin, Munich, Dusseldorf and Hamburg continue to be "in very good shape," said HDE's Falk, before adding that visitor numbers had dropped in many smaller cities and towns.

Wotruba too pointed to a strong resilience of large cities to the online threat depending on population growth, population density, retail centrality, purchasing power and tourism demand.

Despite the urging of collaborative efforts by local authorities and retailers to boost footfall in struggling towns and cities, many store owners remain in denial about the massive shift in consumer behavior.

"Many retailers still believe that more parking lots will save them, although footfall remains strong in most cities. It's just that people are opting for entertainment and food venues instead," Wotruba said.

While HDE's Falk still predicts that Germany will witness more than 50,000 store closures, he is hesitant to put an exact date on it. The retail trade association shocked some politicians when it warned some smaller cities to prepare to shrink the size of their shopping districts.

"It is doubtful that you'll see the return of the same volume of shoppers ever again," he told DW.

Falk, however, sees a positive future for many of Germany's traditional retailers who he said are "solid companies" who are used to "very tough competition."

"So long as they continue to invest in improving their traditional business as well as boosting their online activities, they will continue to succeed," he told DW.

US retailer Sears files for bankruptcy due to mounting debt

Its headquarters was once the tallest building in the world, but Sears’ heyday is now far in the rearview mirror as it files for bankruptcy. The rise of e-commerce has hastened its demise and its future is uncertain. (15.10.2018)

The German cabinet has approved a draft law which would oblige online marketplaces such as eBay and Amazon to collect sales taxes for transactions involving foreign sellers. (01.08.2018)