Germany's two major department store chains Kaufhof and Karstadt have sealed a merger to salvage their operations amid fierce competition from e-commerce players. The tie-up will include a cash injection and job losses. 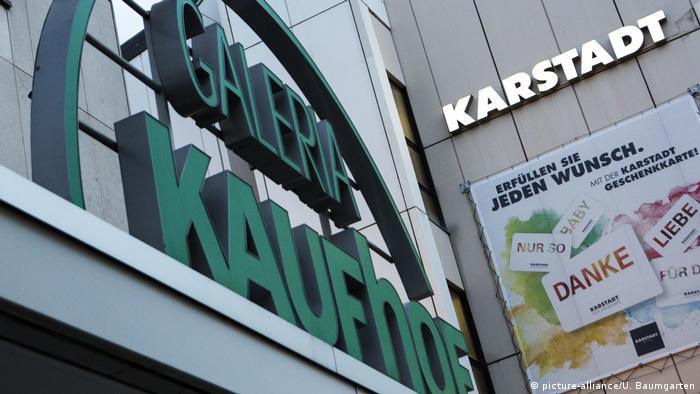 The owners of Kaufhof and Karstadt — Canada's Hudson's Bay and Austria's Signa Holding — have announced that they've sealed a "merger of equals" to combine their European retail and real estate assets, with Signa now owning 50.01 percent in the joint venture and Hudson's Bay holding a stake of 49.99 percent.

Karstadt boss and Signa's head of retail operations Stephan Fanderl was named as chief executive officer (CEO) of the new entity, in a statement released by Hudson's Bay (HBC) on Tuesday.

"We are creating a stronger retail entity that is better positioned to capitalize on market opportunities," she added.

The merger comes under HBC efforts to streamline its European operations, after it bought Kaufhof in 2015 but struggled to make the investment pay off.

Occupying prime locations in most major German cities, Kaufhof and Karstadt have fallen on hard times in the last decade, fueling speculation that the rival chains would be forced to merge. Kaufhof runs 96 department stores in Germany and 19 in Belgium, while Karstadt owns 79 stores and a series of sports outlets.

Read more: The decline of the department store

In the statement, HBC didn't disclose a new name for the new company, which German media have already dubbed "The German Department Store AG."

According to company figures, Karstadt and Kaufhof generated about €5.4 billion ($6.2 billion) in total sales in 2017, employing 32,000 people in 243 different locations across Europe.

Read more: C&A in Chinese hands? What are the odds?

The new company's CEO, Stephan Fanderl, said that now "hard work" would begin to master the "operational challenges amid a demanding market environment."

Although he didn't disclose any details about his strategy, there are already reports about planned staff cuts and lower pay for workers.

German daily Süddeutsche Zeitung reported last week that the merger would result in around 5,000 of the 20,000 jobs at Kaufhof being slashed. The remaining employees would face pay cuts, it added. The cuts were expected at the headquarters of the two groups, as well as in logistics and sourcing.

German department stores on their way out?

German department stores on their way out?

When Hudson's Bay bought Kaufhof in 2015, it hoped to make the department store chain the centerpiece of an expansion into Europe. But the company is battling its own losses and faced a campaign from activist investors to boost its share price by extracting value from its real estate holdings.

By contrast, Signa owner Rene Benko — who acquired Karstadt in 2014 — has managed to bring the business back into the black in the last financial year after making cuts, giving the stores more of a local flavor, teaming up with partners and promoting e-commerce.

Nevertheless, the rapid expansion of online retailers such as Amazon, as well as fierce competition on prices from smaller chains like Primark, will remain the new company's main worry.

Therefore, the merged entity said it was planning to "future-proof" its retail business in the digital age by expanding its online services to become a "leading omni-channel retailer."

Loss-making department store chain Karstadt is set to name its third chief executive in a year. Store closures and job losses are also on the table. (19.10.2014)