Surprised by details Germans take for granted, some newcomers are shocked by the country's supermarket culture. Here's useful advice from a self-declared grocery shopping expert from Canada, who learned the hard way.

When I arrived in Berlin some 10 years ago, trying to find everything I needed for what I believed to be a very ordinary recipe was embarrassingly complicated.

Being a Canadian, most ingredients I would typically require were luckily available in German grocery stores — but not all of them.

Basically, it took time because I had to rule out various options: Was I not finding something because it didn't exist, or because I didn't know where to look?

I once remember going to at least five different stores trying to find soft brown sugar, scanning all the aisles 10 times, hesitating with renewed hope that it had to be there, somewhere, in a hidden spot — especially after I'd discovered that flour was randomly stacked right by the toilet paper in one discount store.

German friends had recommended a stop at the "Bioladen," the organic grocery store, but they didn't realize the raw brown sugar they were referring to was not what I had in mind. Now I know: It simply doesn't exist in Germany.

On top of such challenges, the language was still an issue when I arrived, too.

There isn't necessarily a direct translation for Germany's numerous dairy products, so you need time to discover what they all are. What's the difference between Schmand and Saure Sahne, Crème fraiche and Schlagsahne, Hüttenkäse, Frischkäse or Quark? And all English speakers who've already learned that milk is Milch in German will be astonished to find Dickmilch among those multiple options. 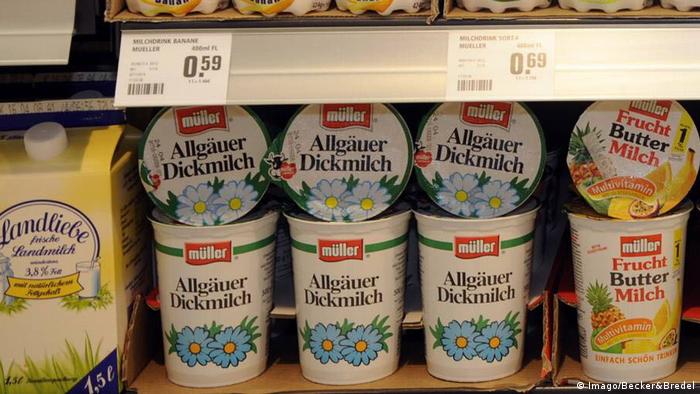 Certain products are already challenging even if you're able to read what's on the package. Take coffee, for instance.

Is a light, dark or French roast something I should care about? What's the actual difference between Robusta and Arabica beans? Does it matter if they come from the Peruvian Andes or Ethiopia? And what about the working conditions of the people who picked the beans in the first place — is that Fair Trade seal enough or should it be organic and Rainforest Alliance certified as well?

And then there's the format: No one wants to end up with coffee tabs without having the right machine for them — plus, they're bad for the environment anyway. So is there a brand of pre-ground beans that works with my stovetop espresso maker?

I was trying to answer all these questions, informed by German labels, while wearing a too warm coat, my arms already loaded with other random groceries (because I had missed the spot to pick up a basket at the entrance) in the most humongous supermarket in the world: a two-story Real store.

After too many minutes of hesitation, I finally found some kind of relatively affordable Fair Trade coffee and decided that had to do.

I spent several days chugging cups of it, finding I was immune to its effects. At some point, I realized that the word "entkoffeiniert" means decaf.

Read more: It's tea time! How the Germans pour the black brew

I needed years of trial and error to become a super-efficient grocery shopper in Germany. And it's not like riding a bike: I find you need constant practice. A couple of months away from your favorite grocery store and you might miss a complete reorganization of the aisles.

Actually, now, whenever I go back to Canada, I'm completely lost in supermarkets there. Way too many items, the lighting is weird, and everything is so expensive.

With German discount supermarket chains Lidl and Aldi opening stores throughout the world, people might not be as shocked as I was a decade ago, when I first stepped into one of those stores with a bare-bone selection and grungy aesthetics (that has also improved greatly since).

In any case, the gallery above shows a few things newcomers — admittedly, mostly North American ones — typically notice when they discover German supermarkets.

What surprised you the most in a German store? Let us know on Twitter @dw_culture using the hashtag #MeettheGermans.

When you get a country's humor, you're a step further in understanding its culture. Some of these 10 different types of German jokes may get lost in cultural translation — but Germans actually do have a sense of humor. (07.03.2018)