It's tea time! How the Germans pour the black brew

While the British may be famous for their tea rituals, one part of Germany overtakes them when it comes to consumption. But just what is an East Frisian tea ritual? A look at how the Germans imbibe.

Germans are well-known for their fruity Rieslings, liters of beer and coffee and cake traditions. But according to the German Tea Association, one region of the country consumes per capita more tea than any other country in the world.

East Frisia, in the rainy coastal northwest, takes the crown for amount of tea drunk per person, with an estimated 300 liters each year, just ahead of Kuwait and Ireland. Yet the East Frisian tea ritual is hardly known outside of the area. (The rest of Germany sips just one-tenth that amount, preferring coffee instead.)

Visiting the sparsely-populated towns, you might get the sense that hot tea serves as an ideal way to ward off the cold and damp when the sea breezes roll in. Yet according to folklore, the tea was simply a more economic choice for the fishermen and farmers than the more exotic coffee tradition that took over the coffeehouses across Europe in the 19th century. 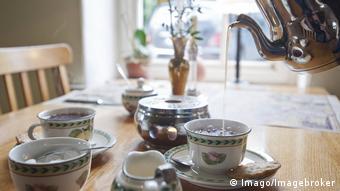 One important element is heat: small cups keep the tea from growing cold

To pour a proper cuppa, it's important to get the right blend of loose leaves. East Frisian tea is a dense black tea, comprised mainly of Assam leaves, with a touch of Ceylon mixed in. What makes it extraordinary in taste is the soft water of the region, but if you can't partake of a tea ritual in northern Germany, brewing your own will do.

In Germany, tea is served in porcelain teapots that are kept warm by a small candle resting beneath. To ensure it's drunk hot, the thick liquid is poured first into small porcelain cups with a piece of rock sugar at the bottom. From there, a dash of heavy cream is poured inside —  although stirring is verboten. The cloud of milk that rises to the top is part and parcel of the East Frisian offering.

Although East Frisia is but a small section of a very large country, the East Frisian tea has found its way to supermarket shelves across Germany, lined up alongside the more popular herbal varieties.

While tea has not reached the popularity levels of a Japanese tea ceremony or created any legends like the soothsaying ritual in Turkey in which your fortune can be read in the way your leaves fall from the glass, tea time is a central figure in German culinary culture.

How do you take your tea? Follow us at Twitter under @dw_culture and let us know using the hashtag #MeettheGermans. You can find further information about the Germans and their culture and language as well as their traditions on our dedicated site: dw.com/meetthegermans.

In case you fancy something sweet, here's a bit of inspiration for pairings with your next cuppa: Germans' favorite cakes.

German cakes may be world-famous, but which varieties are the most popular? Meet the Germans host Kate Müser heads to a cake shop to find out. (08.11.2017)

While the British may be famous for their tea rituals, the Germans have their own habits when it comes to imbibing the hot stuff. Click through the gallery to see just how different the same leaves can be. (15.12.2017)

Severe shortages of fuel, food and other essentials have ravaged Sri Lanka. But the crisis has also crippled the once-lucrative tea industry, which has seen production almost halved, and tea growers are desperate for a resolution.

While the British and the Turks may be famous tea drinkers, a coastal region in the northwest of Germany, East Frisia, now holds the world record in tea drinking.