Germany issues travel warning for Washington after attack on Capitol

Germans have been told to avoid central Washington, DC, following Wednesday's storming of the Capitol building. It's one of several advisories the German Foreign Ministry carries about travel to the United States. 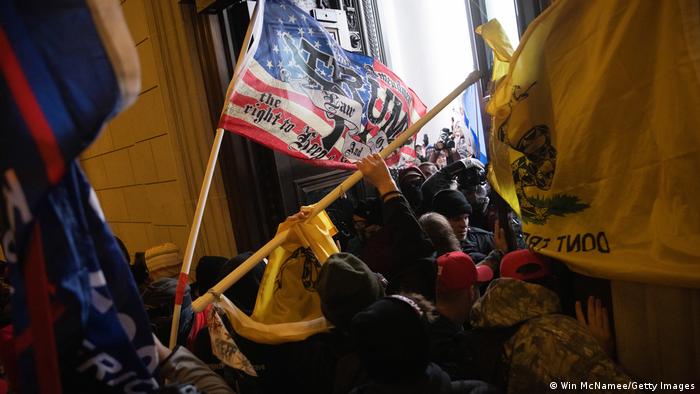 Germans have been warned that unrest could flare up again

It  initially warned Germans to respect the emergency curfew on Wednesday evening but expanded its warning the following day.

"A continuation of the protest actions including the use of firearms cannot be ruled out. The general situation may change at any time, especially during the transition period until the new US government is inaugurated on 20 January 2021, and unrest may flare up again," it said in its travel advisory.

"Adhere to the curfew and avoid the downtown area widely, especially around the Capitol Hill area in Washington, DC. Avoid crowds where there is a possibility of violence.

"Follow local media for updates on the situation. Follow the instructions of security forces," the Foreign Ministry added.

The warning came after a pro-Trump mob broke through police barricades and stormed the Capitol building. As the marauders roamed the building, members of Congress took shelter and security tried to hold back the crowd. One woman was shot dead, and three others died in yet unexplained "medical emergencies."

The mob gathered with the support of outgoing US President Donald Trump, who urged his supporters to march on the Capitol building. He later issued a weak call for peace but negated this by repeating unfounded claims of massive election fraud and endorsing their misguided cause.

The German Foreign Ministry continues to carry US travel warnings on the ongoing coronavirus pandemic, forest fires, and demonstrations.

Due to COVID-19, the ministry warns that "non-essential tourist travel to the USA (including Puerto Rico and other US foreign territories) is currently warned against."

On wildfires, it warns that "isolated wildfires are still occurring in California, Oregon and Washington State and may spread rapidly due to high winds. Ash clouds/rain may/can affect air quality in surrounding cities."

On demonstrations, it says, "Demonstrations against police violence and racism, some of which have been accompanied by severe rioting in recent months, are mostly back on an orderly track," but that "the general situation should be closely monitored as ... violence could flare up again."

The US currently has a travel ban for non-US-citizens and non-US-residents who have been to Germany or the Schengen Zone within the past 14 days.

World leaders called the actions of Trump supporters a "disgrace," and an attack on democracy. Many urged for restraint, calling for the results of the US election to be upheld.

Supporters of President Donald Trump breached the US Capitol as lawmakers gathered to count electoral votes. Here's a look at some of the chaotic scenes in Washington as rioters clashed with security forces.

'I was very, very shocked' – Berliners react to storming of US Capitol