The Greens chancellor candidate for the upcoming federal elections has said she wants a tougher stance from Germany to address Russian aggression in Ukraine and China's global ambitions. 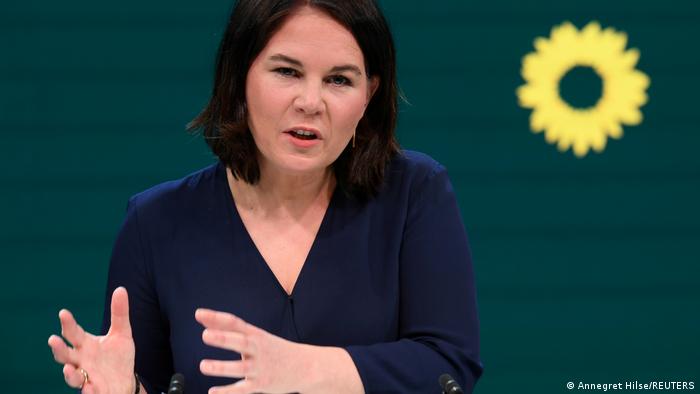 Five months ahead of Germany's federal election, top Greens candidate Annalena Baerbock is arguing for a tougher German stance toward Russia and China.

In an interview Sunday with Germany's Frankfurter Allgemeine Zeitung (FAZ) newspaper, Baerbock said "increasing the pressure on Russia" over its recent military maneuvers near Ukraine should be a priority for Germany.

Baerbock added that that ensuring stability immediately between Ukraine and Russia should take priority over Ukraine's ambition to be included in the EU and NATO.

On the controversial Nord Stream 2 Russian gas pipeline across the Baltic seabed to Germany, Baerbock said that political support for the project must be "withdrawn." The Greens oppose the gas pipeline project, which critics say will weaken Europe and Germany's energy security.

After Baerbock's candidacy for chancellor was announced last Monday, she said that Germany needs a "clearly guided foreign policy" with "authoritarian forces" that focuses on "dialogue" but is "tough" at the same time.

Baerbock said German and European relations with China are a "competition of systems" that place "authoritarian forces versus liberal democracies."  She described China's ambitious "Belt and Road" projects as part of "hardcore power politics."

She added that China is too big to simply cut off ties, but emphasized that liberal democracies must uphold their values.

On security concerns with Chinese technology, Baerbook said she would support Europe limiting cooperation if Beijing were to require Chinese suppliers, such as Huawei, to tap into European data. "We cannot integrate products from such manufacturers into European infrastructure," she said.

On China and the plight of the Uyghur ethnic minority, Baerbock said Europe must ensure that "products from forced labor do not come onto our market."

Baerbock was referring to recent controversy over the sourcing of cotton from China's Xinjiang region, which human rights groups say is harvested using Uyghur slave labor.

The German press was virtually unanimous that Christian Lindner's FDP was to blame for the collapse of government coalition talks. But few could agree on what would be best now.