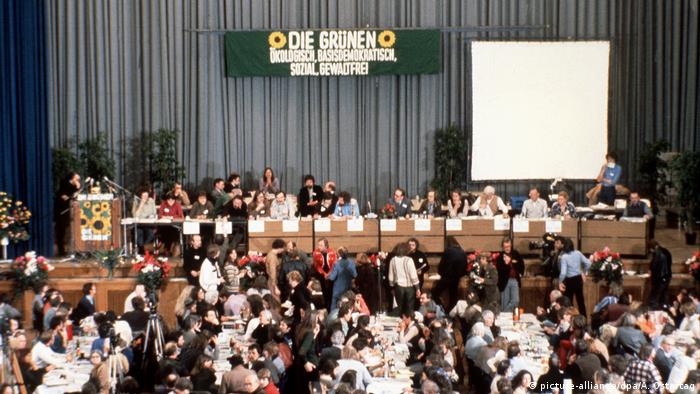 It certainly was a colorful bunch of people that convened in Karlsruhe on January 12 and 13 in 1980. There were veterans of the 1968 students' movement, environmental activists, anti-war protesters, conservatives, animal rights activists, equal rights activists and communists, to name just a few. Many of the men had long beards and wore brightly colored overalls. Many women wore handmade knit sweaters. When all was said and done, the stage had been set for a new political party that would go on to change the political landscape in Germany. The Greens had been founded. 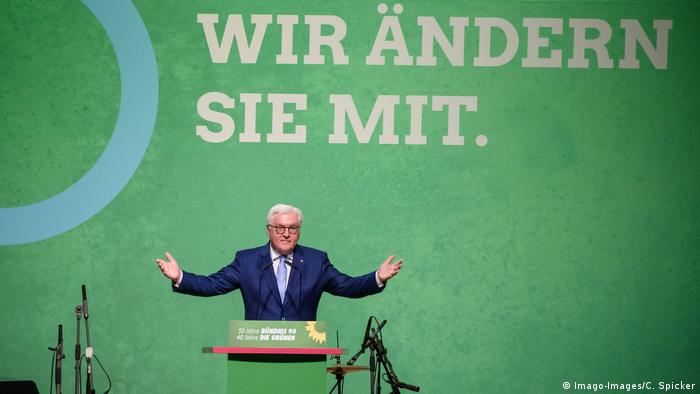 German President Frank-Walter Steinmeier congratulates the Green party on its 40th birthday at an event in Berlin, saying: 'With your success, your responsibility also grows — responsibility not to overlook other interests, not to underestimate other needs.'

Opening up a closed party system

Germany's other political parties had never seen anything like it. Since the end of World War II, politics in what was then West Germany had more or less been solely defined by a handful of parties: the Christian Democratic Union (CDU) and its Bavarian sister party, the Christian Social Union (CSU), the Social Democratic Party (SPD) and the Free Democratic Party (FDP).

But as early as 1983 the Greens managed to make the leap into Germany's parliament, the Bundestag, where they were received pretty much as oddballs and misbehaved children. A generation that had come of age during the era of student protests in the late 1960s soon slipped into serious functionary roles within The Greens. Otto Schily, a left-leaning lawyer, became a key player in the party's first parliamentary group. In 1985, Joschka Fischer — who had previously been a far-left militant in Frankfurt — became the first Green Party Environment Minister in the German state of Hesse. 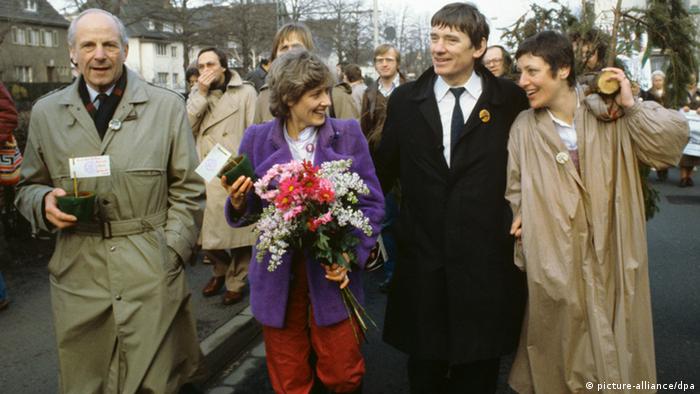 1983: The year the Greens moved into the Bundestag. Otto Schily (second from right) later switched to the center-left SPD party.

Respect for the elders

All that happened a long time ago, but to this day the Greens hold the founding members of their party in high esteem, according to the party's current national managing director, Michael Kellner. "I have great respect for that generation," he says to DW. "They really changed the country, and themselves too. Now they are growing old with dignity. That's why we're seeing Green party success among voters aged 60 and over."

The anti-nuclear movement, disarmament and civil rights issues — these were the main platforms that shaped the Greens in the early years. 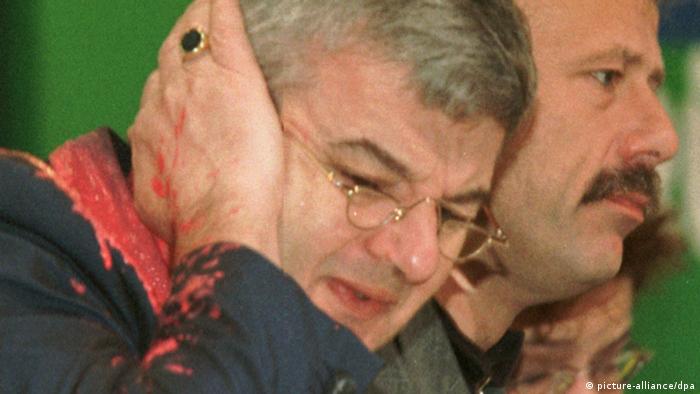 May 1999: Then-Foreign Minister Joschka Fischer is hit by a paint bag at the party conference in Bielefeld.

In 1998, nearly two decades after its founding, the party advanced into the inner realms of power. Joschka Fischer was named foreign minister, and along with its coalition partner, the SPD, the Greens ruled the country for seven years.

It was during this time that the Green party experienced the first major turning point in its history: Fischer endorsed Germany's participation in the Kosovo War — marking the first time since WWII that German soldiers would be involved in a combat mission. The party of strict pacifists were troubled as they reluctantly followed his lead. The frayed unity was illustrated when a protester hurled a bag of paint at Fischer during a party convention.

Coalescing with an eastern counterpart

At the time, Kellner was brand new to the Green party and strongly opposed Fischer's stance. After Fischer's victory at the 1999 party convention in Bielefeld, Kellner thought long and hard about whether he should resign from the party. He ultimately chose to stay on.

What the Greens stood for, at their core, was more important to him "because we introduced a unique idea to politics,” he says, "namely the idea that it's important to people to bring the issues of environmental protection and the preservation of nature, and climate protection, to the center of politics," says Kellner.

"None of the other parties — the Social Democrats, the conservatives or the free-market liberals — were addressing any of that."

Even before all this, when the party was still part of the political opposition, there was another crucial turning point: when the Greens got an eastern kindred spirit. Various civil rights movements, including the New Forum political movement, formed Alliance 90. But it wasn't until much later, in May 1993, that the two parties joined forces to become Alliance 90/The Greens — as they are officially known today.

Even to this day, however, the Greens have yet to really make their mark in eastern parts of the country. The party's election results there are consistently well below those in the west, especially when compared to the major cities of former West Germany. 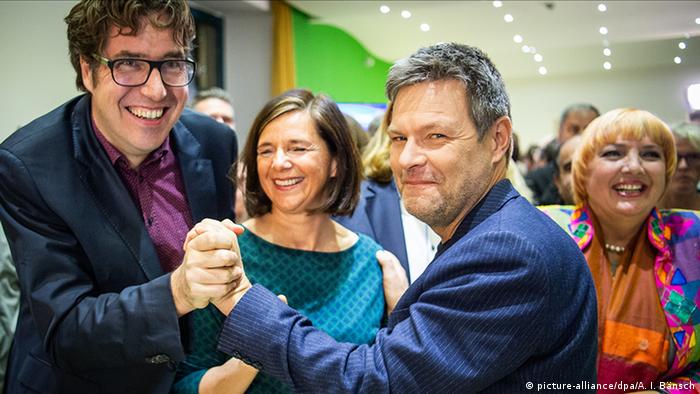 Another milestone under the Greens-led government was the phasing out of nuclear power in Germany. After a long, hard struggle, business and political leaders reached an agreement in 2002 to shut down reactors and phase out nuclear power by 2020. For current party co-leader Annalena Baerbock, then 22, it was a defining moment.

Looking back, Baerbock says it was an example of how politics can trigger change, even when there is big resistance. When the SPD-Greens coalition achieved nuclear withdrawal, "That's when I saw that Greens participation in government achieved what the party has been fighting for for years."

A subsequent government went on to reverse the decision to phase out nuclear power, but then, in the wake of the Fukushima nuclear disaster in 2011, the exit was reinstated and made final. The Green party has since experienced an upswing in the polls and then landed a spectacular win in Baden-Württemberg state elections, with Winfried Kretschmann becoming the first-ever Green Minister-President of any German state. 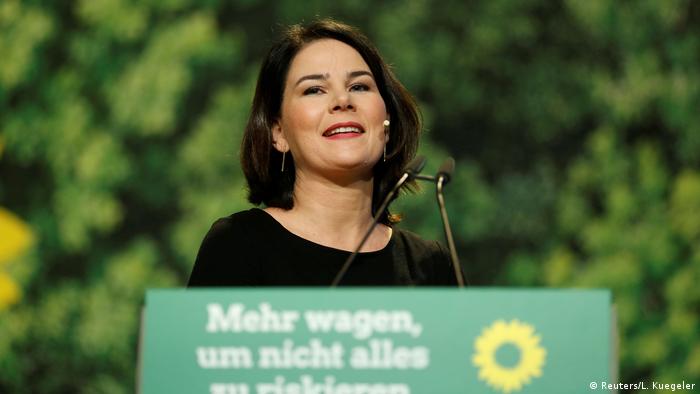 Annalena Baerbock has co-led the Greens for over two years.

Consistent scores of 20 percent and higher

Ever since climate change climbed to the top of the political agenda, the Greens have consistently scored 20% and higher in the polls, and they co-govern 11 of Germany's 16 states. In European elections last year, they achieved a record-breaking 20.5% of votes among Germans.

They've had a surge in popularity over the past five years. Even though their critics often brand them as a "party of prohibition," many young people are signing up to join, with membership now topping 100,000.

Georg Kurz is one of those members. He's a spokesman for the Greens youth party, and he says he experienced a personal turning point last year. It was then, he says, "When you could see how the times are changing and how more and more people are coming to realize that things can't stay the way they are — that we have to make a fundamental shift."

"In fact, right now, we're in the midst of the most crucial phase in Green party history, Kurz adds. He's referring to the fight to stop climate change. Many observers predict that the Green party has a good chance of once again co-governing the country from the seat of power in Berlin after the next parliamentary elections in 2021. That's an outlook that few could have imagined all those years ago when the party first formed in 1980.

The Greens called for more social and climate-friendly reforms at the end of their party conference. With the party now a potential partner in Germany's next government, their economic proposals were watched closely. (17.11.2019)

The Green party sought to scrap the agreement, citing safety concerns. However, the government in Berlin says it is committed to its longstanding deal over the "peaceful use of atomic energy" with Brazil. (14.11.2019)

Opinion: Germany is fighting for its identity

On the 80th anniversary of the first battle of World War II, the right-wing populist AfD party scored its strongest-ever results in two states. Germany is now wrestling with itself, says DW's Editor-in-Chief Ines Pohl. (01.09.2019)