Germany, China seek closer alliance over trade spat with US | Business | Economy and finance news from a German perspective | DW | 09.07.2018 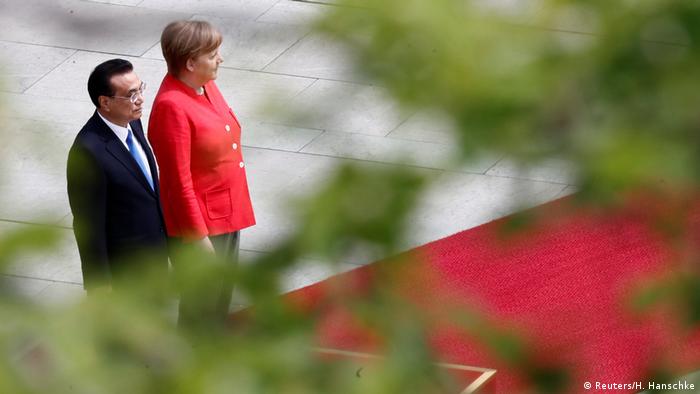 German Chancellor Angela Merkel and Chinese Prime Minister Li Keqiang held talks on closer economic cooperation in Berlin on Monday as the two countries seek a coordinated strategy in response to the US administration's protectionist agenda.

As part of the talks, the two countries signed a raft of commercial agreements worth some €20 billion ($23.5 billion). The deals, involving German industrial giants like Siemens, Volkswagen and BASF, come as the two exporting powerhouses are being forced into an unlikely alliance in defense of the open global trade on which both of their economies depend.

"We both want to sustain the system of World Trade Organization rules," Merkel said at a news conference she gave alongside Li.

For his part, Li said that China would further open its economy to foreign investment. In particular, he pointed to the insurance and bond markets and gave assurances that his country has intellectual property guarantees in place to ensure that German companies need not fear losing proprietary technologies.

Last week saw a worsening of the already severe trade conflict between Washington and Beijing, with the US imposing higher tariffs on a wide range of technological goods imported from China. Beijing immediately reacted to the measure by slapping higher tariffs on predominantly agricultural products from the US in a bid to harm US President Donald Trump's voters in rural areas.

Both sides are also mulling imposing higher duties on imported cars — a measure that would also hurt Germany with carmakers such as BMW and Daimler shipping a large number of vehicles to China from their production facilities in the US.

The head of the Asia-Pacific Committee of German Business (APA), Hubert Lienhard, said that in the face of a growing protectionist agenda in the US, a joint German-Chinese message to the White House "could be one the of things emerging from today's government consultations."

He hastened to add, though, that this signal should come in the form of a renewed commitment to free trade, not a blunt warning to Trump.

WTO: Is the free trade advocate facing a deadlock?

But Lienhard emphasized that differences between Germany and China must not be ignored either.

"We see two different systems competing with each other: China's state-run capitalist order is pitted against our system of a free market economy. This regularly creates problems, but they certainly can be addressed at joint meetings."

WTO to the rescue?

The managing director of the Association of German Chambers of Trade and Commerce, Martin Wansleben, also spoke out Monday in favor of strengthening economic relations between his country and China.

"The United States used to be a good trading partner for us," he said. "But Trump obviously wants us to lose this partner." Wansleben added that China also needed to change its positions in many areas, "but there's definitely more room for improvement."

Bingmann added, though, that other sectors were still out of reach for foreign market players.

The BGA said that "in light of Donald Trump's protectionist agenda, China and the EU should have a vested interest in strengthening the World Trade Organization and its arbitration system."