Germany has started repatriating the children of jailed "Islamic State" fighters from conflict zones the Middle East. European countries are grappling with how to handle returning foreign fighters and their families. 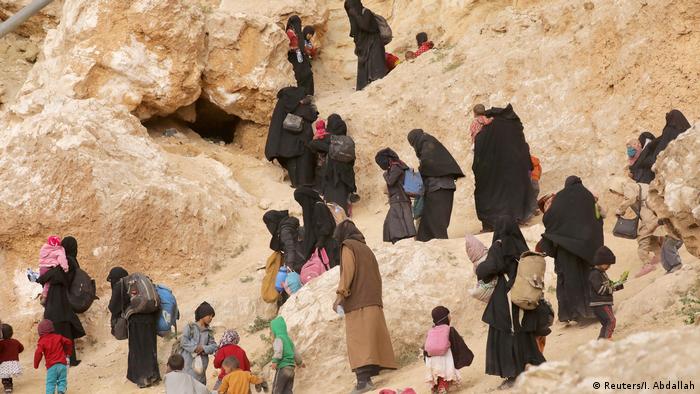 The German Foreign Ministry said Friday it had brought several children of convicted "Islamic State" (IS) militants back to Germany from Iraq.

The returns were carried out with the consent of the parents, a ministry source said, adding that the number of repatriations so far had "reached a high single-digit figure." The children are staying with their relatives in Germany.

With the collapse of the once expansive IS caliphate, a number of European countries are facing the difficult question of how to deal with returning jihadis and their children.

According to German authorities, there are at least eight German nationals jailed in Iraq for joining IS, with sentences ranging from several years in prison to the death penalty. Officials say there are also more than 60 suspected IS members from Germany being held by Kurdish forces in northern Syria.

Read more: Donald Trump calls on Europe to take back hundreds of captured IS fighters

Among the first to land in Germany were three children, who arrived with their 31-year-old mother at Stuttgart airport on Thursday, the family's lawyer confirmed. Authorities immediately placed the woman under arrest, the lawyer Mahmut Erdem said in a statement. She reportedly took the children to Syria against the will of their father in 2015, and had been considered a threat by authorities since 2017.

The Interior Ministry estimates around 1,000 people left Germany to join terrorist groups in Syria and Iraq after 2013. About one-third of these individuals have already returned to Germany, and some of them have been prosecuted or placed in rehabilitation programs.

Germany has said it will seek to repatriate German nationals currently being held in the Middle East. The ministry said it was particularly concerned about the children of fighters, describing them as innocent victims in the conflict.

The Bundestag this week approved legislation to strip dual nationals of their German citizenship if they join foreign terrorist militias; however, the law only applies to future cases.

Interior ministers from the Group of Seven countries are expected to discuss the return of foreign fighters when they meet in Paris on Friday. France last month took in five orphans from the Middle East and says it will assess other returns on a case-by-case basis.

Germany preparing to prosecute dozens of IS fighters: report