Germany: A survival guide for winter

With Christmas celebrations at an end and winter well underway, many people in Germany feel the weather weighing on their spirits. But these tips from residents on how to fight off gloom and spread joy could help. 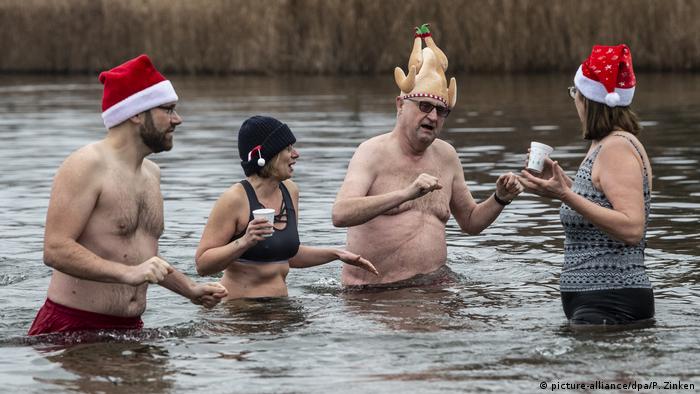 Germany has much to offer in winter: Its beautiful Christmas markets, winter sports and lovely snowy landscapes attract many visitors from around the world each year.

But the season also has its downsides for many.

One to 3% of people in Germany suffer from seasonal affective disorder (SAD), according to Dr. Iris Hauth, president of the German Society for Psychiatry and Psychotherapy, Psychosomatics and Neurology.

Also simply known as winter depression, SAD is characterized by a recurrent pattern in which depressive or negative mood episodes begin in fall, worsen in winter and improve in spring.

The nature and severity of SAD varies from person to person, with some reporting mild irritation and others reporting decreases in quality of life.

"Those affected feel in a depressed mood, suffer from a lack of interests and sometimes have difficulties concentrating," Hauth told the German newspaper Berliner Morgenpost.

Young people are hit the hardest and women are four times more likely than men to suffer from SAD.

According to the US National Institute of Mental Health, people with a history of depression or living at a great distance from the equator face higher risks.

Let there be light

A leading cause of SAD is a lack of sunlight, something that is par for the course in Germany: last winter, it had a mean of just two hours and twenty minutes of sunshine per day.

And that dearth of sun can be hard for people to take, especially those who come from warmer and more sunlit climes.

"In Brazil, we don't know what winter is … I myself feel darker in winter in Germany," said 46-year-old Shenia. She made the move from Sao Paulo to the town of Bonn and has since struggled to fight off the winter blues.

Low exposure to light results in a higher production of the sleep hormone melatonin, which controls the body's day-night rhythm. During melatonin production, the body converts serotonin, affecting the person's mood. Studies have suggested that the more time spent awake during the melatonin phase, as is the case in winter, the higher the risk of SAD and depression.

Britain's National Institute for Health and Care Excellence recommends that SAD should be treated in the same way as other types of depression and to consult a doctor when having trouble coping with SAD symptoms. Treatments such as cognitive behavioral therapy or medication such as antidepressants are also believed to relieve symptoms. Light therapy, although the extent of its effectiveness is not yet proven, is also a popular treatment.

But German locals have other ideas on how to beat the winter blues, some of which may be a lot more fun and affordable.

Wear the right clothes, and go outside

DW interviewed people living in various cities across Germany, asking them how they coped with the winter blues and what advice they would share.

Most interviewees reported feeling less gloomy after spending time outdoors or engaging in physical activities such as taking a walk or playing a sport. This comes as no surprise, as exercise has been proven to reduce melatonin levels.

True to the German reputation for practicality, many also advised wearing "suitable clothes" to keep warm and cozy during the cold winter months, adding that the extra layers can help encourage stepping outside and breathing some fresh air. As some might say, there is no such thing as bad weather, only bad clothes.

'A sad kind of beauty'

Andre, 27, is a Berliner and believes in the unique beauty of Germany's winters. "It's a sad kind of beauty … when there is snow, it's absolutely beautiful." His advice is to take a stroll through the country's many forests and not to be hard on yourself for having winter blues. His personal favorite is "walking on frozen lakes and cracking the thin ice on top of puddles" to stave off gloom.

The importance of connecting with others was another recurring theme among the respondents. Jan, a 19-year-old law student from Berlin studying in Bonn, talked of "soziale Kälte" (literally: social coldness), a German phrase using the concept of low temperatures to describe social indifference. He said while people might be more inclined to show this tendency during winter, he encouraged people to reach out to others regardless.

Jan suggests volunteering to help homeless people. He believes that helping others adds purpose in life and is "a sense of warmness" in itself — all important elements to combating his blues.

The importance of coziness

Bernadett, 67, and Franz, 66, live in the western city of Münster. Both experience gloominess and mild irritation, especially in December when the "winter doesn't seem to stop." But every year they pull through. "Create a nice atmosphere inside the home," they advised. "Make it nice and cozy" and more importantly, "drink hot tea or red wine, in moderation."

Twenty-seven-year-old Louisa echoed her parents. "Make yourself comfortable inside … turn on a warm light, read a book, listen to music and try to enjoy that." She added that "Vitamin D pills and nice homemade woolen socks" also help ward off winter depression.

Those who have made the leap to Germany from other countries say taking advantage of the unique German landscape in the winter is a great way to appreciate the season.

After Christmas markets come to an end, many recommended finding activities or places to visit that are available in Germany but not in their home country. They said ice skating, snowball fights, learning to ski, taking a trip to the local spa or sauna and strolling through woodlands or the abundant weekend food markets were an effective way of reducing SAD symptoms.

"Invite friends to have some "Glühwein" (mulled wine) … try cooking all the German dishes … see how Germany looks in white snow," advised 29-year-old Varun from India.

Gabriela Rangel went from long sunny days in Mexico to dreading long winters in Freiburg in southwest Germany. While she said that Germany's winter season is likely to put her off from settling down long-term in the country, she said running and going outdoors help combat her gloominess.

While she still dreams about returning to Mexico's endless sunshine, she had some words of wisdom to share with fellow new arrivals in Germany. "It's normal to feel blue. Accept it and work towards feeling better, don't just stay indoors."

If you are suffering from emotional strain or distress, seek professional help. You can find information on where to find help, no matter where you live in the world, at this website: www.befrienders.org