German Ship Seized with Uranium-Making Parts for Libya | Germany| News and in-depth reporting from Berlin and beyond | DW | 01.01.2004

Officials have confirmed that a German-flagged ship was carrying parts to build a nuclear bomb from a Persian Gulf country to Libya in October. Investigators seized the shipment before it reached its destination. 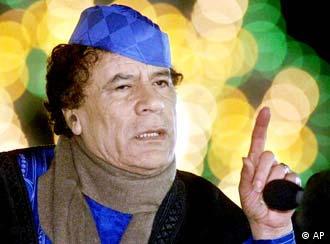 Just a few months before Libya declared it would cease its efforts to create weapons of mass destruction, American and British agents seized a German freighter ship loaded with centrifuges and other parts that are used to create enriched uranium, the material needed to build nuclear bombs. The seizure is believed to have influenced Tripoli’s decision to suspend its weapons program last month.

On Wednesday, U.S. State Department spokesman Adam Areli confirmed the discovery following a report in the Wall Street Journal, a financial daily, that the German ship had been en route to Libya but was diverted to an Italian port so that U.S. investigators could seize the content. The newspaper cited officials saying the German company which owns the ship, Hamburg-based BBC Chartering and Logistic, had been extremely cooperative with investigators after they were alerted to intelligence that the ship might be carrying the parts.

"A ship was diverted, based on intelligence, that it was carrying centrifuge parts in early October," Areli said, adding that the seizure demonstrated the value of the U.S.’ Proliferation Security Initiative, which aims to prevent the production of weapons of mass destruction. Sixteen countries, including Germany, are participating in the global initiative.

U.S. and British intelligence agents had learned the ship would be leaving a Persian Gulf state with the parts and an ultimate destination of Libya. German authorities were informed and contact was made with the German shipping company. A U.S. Navy ship then escorted the "BBC China" to port. Investigators found several thousand components on the ship that are used to enrich uranium.

Washington officials said Wednesday they believed the discovery might have helped sway Libya towards agreeing to stop its weapons program and open its doors for international inspections. Following months of secret negotiations with Tripoli, the U.S. and Britain announced on Dec. 19 that Libyan leader Moammar Gadhafi had agreed to a deal on inspections.

After the seizures, an unnamed U.S. government official told the paper, Tripoli "saw how much we knew about what they were doing."

With the investigation continuing, U.S. officials have refused to state who sold the centrifuges or where they originated from.

Opinion: A Model for Successful Pressure Against Rogue Nations?

Libya's leader, Moammar Gadhafi, has done an about face, and agreed to give up his weapons of mass destruction. But the case of Libya is different from that of Iran and North Korea, argues Peter Philipp. (Dec. 22, 2003)