German presidential election goes the distance, but favorite prevails | Germany | News and in-depth reporting from Berlin and beyond | DW | 30.06.2010

Germany has a new president, and it's the man everyone expected, Christian Wulff. However, the manner in which Wulff won was anything but convincing, and points to frictions within Germany's ruling coalition. 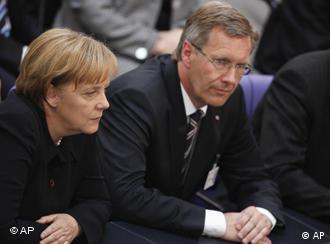 Chancellor and president had a more nervy day than expected

Germany's new president, Christian Wulff, looked a shoo-in for the post in the run up to the election, but a lack of support from his own party almost cost him the job.

It took three rounds of voting to decide the presidential race, after Wulff failed to secure the absolute majority required to win in an earlier round. The Christian Democrat state premier of Lower Saxony won in the final round of voting on Wednesday evening, with an outright majority of 625 seats. Government supporters gave Wulff a standing ovation after his victory was announced.

"I accept my election extremely gladly and with conviction, and look forward to the responsibility," Wulff told the Federal Covention that had voted for him. "I will try very hard to meet your expectations," he said. 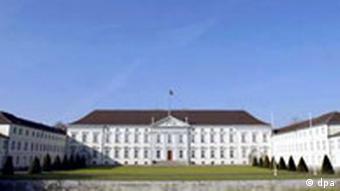 Wulff and his family will move into the Bellevue Palace

German Chancellor Angela Merkel said she was delighted with the result and played down suggestions that the fact that three rounds were needed to select her candidate represented a blow to her authority.

"At the end of the day we had a very convincing result," said Merkel. "It is about the election of a president, which should take place freely and openly."

In the first two rounds, Wulff had failed to reach the required threshold of 623.

This came as a shock; Merkel's ruling center-right coalition had an absolute majority within the 1,244-seat voting assembly, so their candidate Wulff was guaranteed an immediate victory if their politicians toed the party line. Some, however, did not, despite appeals from senior party members.

"Christian Wulff must be able to rely on us," deputy chairman of the CDU, Wolfgang Bosbach said in a television interview, appealing to party members to consider "what their individual vote will mean for the coalition government."

Wulff's candidacy came under threat primarily from a strong center-left opposition candidate, Joachim Gauck, who's centrist positions made him attractive on both sides of the spectrum. A former civil rights activist, who fought against communist oppression in the former East Germany, Gauck is held in high esteem across party lines.

Gauck's final tally in the decisive third round was 494 votes, still more than many had expected. 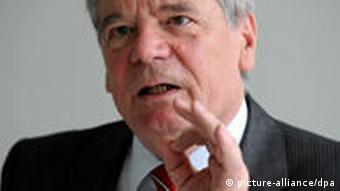 Gauck never had enough votes to win, but still caused a stir

Gauck received 499 votes in the first round and 490 in the second, 39 and 30 more than expected. In total, the opposition Social Democrats and Greens - who put Gauck forward as a candidate - only command 460 votes.

However, to have any chance of outright victory, Gauck needed support from the socialist Left Party, who had fielded their own candidate, Lukrezia Jochimsen.

Jochimsen had received over 120 votes in the first two rounds, and adding this tally to Gauck's would have created a winning margin. But the Left Party had made it clear they did not support Gauck's candidacy, despite Social Democrat and Green attempts to convince them.

"Now it's a question of what the Left party will do," Social Democrat leader Sigmar Gabriel said on public television after the second round. "They will either help Mr. Wulff or Mr. Gauck towards a majority."

Jochimsen withdrew from the third round of the vote, freeing up her party members to decide as they saw fit. But the Left Party was hardly throwing its weight behind either mainstream candidate.

"Obviously I would imagine that neither conservative candidate is considered electable by our members," party leader Gregor Gysi said, reiterating his belief that Gauck's politics are in fact right of center. Gysi said he expected most of his members to abstain from the vote, even though the decision was theirs to make individually. 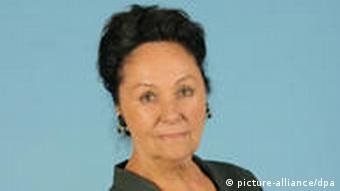 Jochimsen pulled out for round three, but so did her supporters

Most Left Party politicians did abstain. A total of 121 delegates did not cast their vote in the decisive phase, a number, however, that would not have proven decisive in the end.

Christian Wulff will now succeed former President Horst Koehler, whose surprise resignation in May led to the June 30 snap elections. Koehler stepped down after a comment on the German military's role had caused a political scandal.

While visiting troops in Afghanistan in May, Koehler had suggested, that the Bundeswehr might also serve to protect Germany's economic interests. The war in Afghanistan is already widely unpopular in Germany and Koehler saw himself faced with mounting criticism and pressure after his controversial comments.

The German presidency, which carries very little actual power, has long been seen as the final station in a successful political career.

With Wulff as the next president, he and his 36-year-old wife Bettina will be the youngest couple ever to move into Berlin's Bellevue Palace - along with two children from each partner's first marriage and the son they had together.

Characterized by supporters as a builder of bridges, Christian Wulff wants to bring the people of Germany together. If he wins the election, a young famliy will be taking up residence in Berlin's Bellevue Palace. (29.06.2010)

Germany's federal president is not chosen through a popular vote. Instead, a special committee is formed with the sole purpose of selecting the president via a vote. (29.06.2010)

As Germany's Federal Convention prepares to elect the country’s new president, the nature of the role is once again in question. What qualities should a national head of state who has no real political power possess? (30.06.2010)

Election was prompted by the shock resignation of Horst Koehler (30.06.2010)