Germany's organ donation rules will remain largely unchanged after an emotional debate in the Bundestag on Thursday morning. The country will stick with a system of informed consent, whereby only people who voluntarily register as organ donors are eligible. Most, but not all, EU members have moved to an opt-out system that presumes a willingness to donate.

Health Minister Jens Spahn, a Christian Democrat, had led the push to reform the system along with a Social Democrat, Karl Lauterbach. They had proposed a system of presumed consent, albeit also adding the chance for relatives to object to organ donations after the person's death. The motion failed by 292 votes to 397.

A rival proposal, put forward by a group led by Green party lawmaker Annalene Baerbock, passed by 432 votes to 200, with 37 abstentions, in the decisive final vote. It advocated keeping the existing system of informed consent. However, in a bid to shorten Germany's transplant waiting lists, people will be asked when renewing their national identity cards if they'd like to donate organs.

After the defeat, Spahn pledged to enthusiastically implement the rival proposal, saying both plans had the same ultimate goal, even if they disagreed on the best method.

"I hope I will be proven wrong and that we will indeed manage to significantly increase the number of organ donors [in this way]," he said.

Karl Lauterbach, meanwhile, told DW he regretted his motion's defeat: "There's people dying on the waiting list every day ... The law will change literally nothing, it depends on people changing their minds while they get a passport. I don't know of anyone who reconsiders his position about organ transplantation while he gets a passport," he said.

A third proposal from the AfD, based on a public information campaign to try to attract donors, never came to a vote once the second motion passed.

Note: The UK is in the process of switching to a system of presumed consent

Read more:  Organ donation: Germany debates how to get people on the list

Why was the debate taking place?

Germany's organ donation figures are doggedly low. More than 9,000 people are currently on the organ waiting list, while only 932 people last year agreed to donate, a reduction of 23 compared to 2018.

With 11.5 donors per million people, Germany's organ donation rate is almost three times lower than that of the United States, and more than four times worse than world leader Spain.

Polls repeatedly point to a majority of Germans being in favor of organ donation, despite the low active sign-up rate. That comes as no surprise to Eugen Brysch, chairman of the German Foundation for the Protection of Patients (Deutsche Stiftung Patientenschutz).

"For an opinion poll, you can quickly say yes or no," Brysch says. "But when you start thinking in detail about the issue, then you have to face some fears. Suddenly it's not abstract but rather all about yourself, and that always makes a big difference."

Liver recipient: 'I believe most people don't think about it much'

Oliver Weber beat the odds of Germany's long transplant waiting lists. He received a life-saving new liver on March 22, 2012, then aged 47, after being diagnosed with the rare autoimmune disease primary sclerosing cholangitis (PSC). 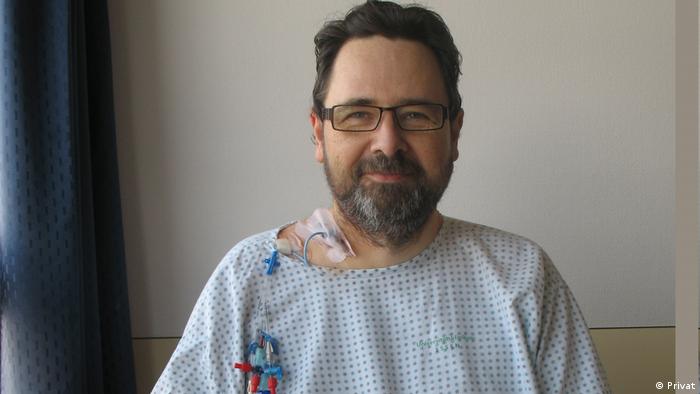 Oliver Weber, pictured in 2012 at the university clinic in Essen, five days after his successful liver transplant

Around 36 hours after the eight-hour operation, he vividly recalls waking up from the artificial coma: "It was a crazy feeling. I felt blissful, and full of energy." He refers to March 22 as his "second birthday" and celebrates both events together, as they fall just a few days apart. He's been an organ donor for years, but was in favor of the plan for a system of presumed consent.

"If somebody says they don't want to donate organs on ethical or religious grounds, then that's to be respected," Weber tells DW. "But I believe that most people don't think about it much ahead of time. [Presumed consent] doesn't take away the people's voice, it merely forces them to make a decision."

As with all votes on purely ethical issues, politicians were free to vote according to their personal beliefs. Somewhat unusually, Thursday morning's emotional debate in the Bundestag saw party allies passionately advocating opposing positions.

Meanwhile, the CDU's Gitta Connemann argued that a different fundamental question was in play: "Can the state demand a decision from its citizens? A decision for, or in this case, against, donating organs? That's all this debate is about. Of course it cannot force them to donate ... This is about life and death, and nothing is more important. A simple 'no' suffices."

Other politicians drew on personal stories in their comments. The Left party's Kathrin Vogler alluded to a friend who had been on dialysis, hoping for a kidney transplant, for over a year.

"She needs a transplant in the near future just to survive," Vogler said. "But she said to me: 'I'm an organ donor myself and have been for years. For me, it's a no-brainer. But it's also important to me that I can decide voluntarily. I do not want to be forced to go somewhere to put what I do not want on the record.'"

Claudia Schmidtke (CDU) singled out a young man in the audience who had benefited from an organ transplant despite Germany's shortages. He became the first person in the country to receive a lung transplant from living donors eight years ago, when he was 11. Both his parents had donated parts of their lungs to save their son, Schmidtke said, concluding that the shortage had ultimately endangered three lives in his case.

Berlin and Beyond: Donating my organs

German Health Minister Jens Spahn's suggestion that Germany needs an opt-out organ donor system to boost numbers, has drawn both applause and criticism. For Tamsin Walker, it's been an overdue wake-up call. (07.09.2018)