A private investor has announced plans to move a sausage museum to Mühlhausen, Thuringia. The fact that the museum will be on the site of an annex of the Buchenwald concentration camp has caused anger. 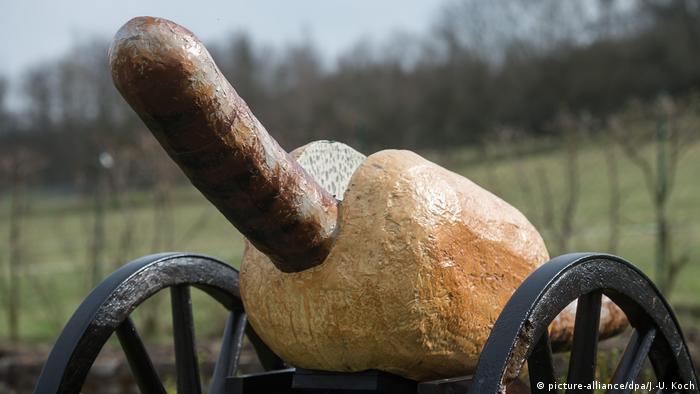 A private developer has faced a backlash after announcing plans to move the German Bratwurst Museum to a site near Mühlhausen, Thuringia, where an annex to the former Nazi concentration camp Buchenwald was situated.

The building set to house the sausage museum was an external annex of Buchenwald codenamed Martha II where some 700 Polish and Hungarian Jewish women lived from September 1944 to February 1945 while being forced to work at a nearby munitions factory.

Most of the women were brought there from the Auschwitz death camp, where many were returned when no longer able to work.

The developer, Jan Kratochwil, head of a local air conditioning company, won Mühlhausen's bid to develop the new museum at the site, having bought the 16-hectare property in 2008. He also planned to open a theater, a hotel, and other event locations.

The eastern German state of Thuringia is known for its Bratwurst sausage, and local authorities said the current museum in Holzhausen was too small for the 50,000 visitors it receives every year.

Mühlhausen's marketing chief Christian Fröhlich downplayed the historical significance of the site on Thursday. "Our city archive checked everything very carefully," he told the Bild newspaper. "There was no annex of Buchenwald here. The inmates might have stayed there overnight, but did not work there." 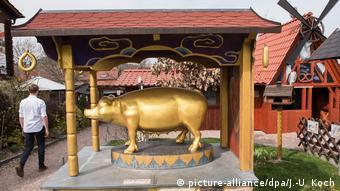 The current museum is too small for its 50,000 annual visitors, the city said

That statement puzzled Rikola-Gunnar Lüttgenau of the Buchenwald Memorial Foundation, not least because the city had not been in touch before the decision was made. "I cannot explain how one could come to such a statement," he told DW. "There is research about this camp, and its existence is beyond doubt. The history of this place has not been taken into account in any way at all up until now."

Nazi Germany's concentration camp system was vast and complicated, with hundreds of buildings and barracks used temporarily to house inmates outside the main camps. According to Lüttgenau, Buchenwald alone had 139 external annexes.

"Unfortunately it is part of the history of post-war Germany that these places were often made invisible," Lüttgenau said. "That often even applies to the main camps, not just the annexes."

But the negative press that developed this week appears to have prompted a re-think at the museum, and in Mühlhausen town hall. Uwe Keith, chairman of Freunde der Thüringer Bratwurst, ("Friends of the Thuringian Sausage"), the organization that runs the museum, said they had not been aware of the site's history until this week.

"Based on the facts that have come to light, we will investigate the historical background in the coming days, and, involving everyone responsible and taking into account public opinion, will carry out a completely new assessment," Keith told DW in an email. "Our association is an internationally-networked organization for whom the principles of human rights and international understanding are of the highest concern."

Lüttgenau also said that the mayor of Mühlhausen, Johannes Bruns, had since been in touch with the Buchenwald Memorial Foundation. "They are clearly interested in talking, but it remains to be seen whether any future use for the site will incorporate how this historical layer from its time as an annex of Buchenwald is to be remembered," he said.

Bruns' office was not reachable for comment on Friday, though local authorities are now meeting to consider alternative locations. Bruns is also due to meet with Thuringia's Culture Minister and anti-Semitism commissioner Benjamin-Immanuel Hoff to discuss the plans.

By the time Buchenwald was liberated by the Allies in April 1945, more than 56,000 of the 280,000 people that had been imprisoned in the camp had been murdered or died as a result of starvation, illness or medical experiments.

Reinhard Schramm, president of the Jewish Community of Thuringia, was clearer in his opposition to the museum, telling the MDR public broadcaster, "a location on the site of a former barracks for Jewish forced laborers is unacceptable."

The developed has already created political repercussions. Three Thuringia state parliamentarians released a statement demanding that "all those involved" distance themselves from any further plans to build the museum at the site.

"It is and remains all our responsibility to use these sites to commemorate and actively confront the destruction of Jewish life in Germany and the new forms of anti-Semitism today," read the statement from the Left party's Katharina König-Preuss, Social Democrat Birgit Pelke, and the Green party's Madeleine Henfling.

Saul Friedländer: 'Historian of the Holocaust' and beyond

Historian and Holocaust survivor Saul Friedländer is the guest speaker at the German parliament's commemorative ceremony for the victims of the Nazis. Here's the story of the Pulitzer Prize-winning author. (31.01.2019)