A photo showing two presumed British neo-Nazis saluting inside a former crematorium cellar at Buchenwald near Weimar has prompted a major probe in Germany. More than 56,000 persons perished at the Nazi death camp. 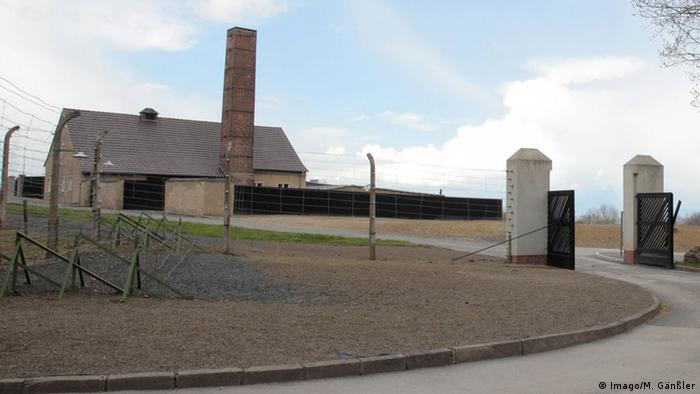 It showed two neo-Nazis, presumed to be British, with their facial features electronically masked, making a Hitler salute inside the cellar of Buchenwald's former crematorium. An arrow with the words "meat hook" points to a wall attachment.

Built in 1940, Hitler's elite SS stacked bodies in the cellar and used an elevator to lift the dead into the cremation room above.

Inside the cellar, some 1,100 men, women and youths were strangled to death. The SS hung them up on hooks.

Displaying contempt for former victims of the Nazi regime, denying the Holocaust and displaying Nazi symbols are punishable crimes under post-war German law.

Reports on Thursday said a charge stemming from the photo was lodged by administrators of the memorial site, which yearly has half-a-million visitors and marked the 70th anniversary of its liberation last year.

A memorial administration spokesman told eastern German public television MDR late Wednesday that a tip drew its attention to the offensive photo - one in an increasing series of recent provocations by neo-Nazis. 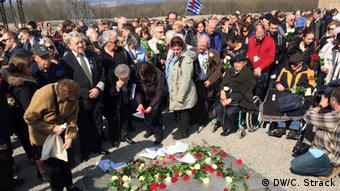 MDR said Thuringia state's domestic intelligence agency, the Verfassungsschutz, was investigating whether the photo was the result of contacts between British and neo-Nazis in Thuringia.

"The perpetrators identify themselves openly with National Socialism and its mass murder. This is severe denigration of all of the almost 280,000 inmates of the concentration camp Buchenwald; among them were also Britons.

"It is therefore to be assumed that the perpetrators did not act spontaneously by proceeded deliberately and were well-prepared," Knigge told Bild.

Between 1937 and early 1945, Hitler's SS interned 278,000 persons, mainly Jews, Sinti and Roma, at Buchenwald and its outlying sites - until its liberation by horrified American troops.

By April 1945, more than 56,000 inmates had died of torture, in "medical" experiments and from exhaustion, mainly as forced laborers for the Nazis' then armaments industry.

The British group "National Action" exists since 2013, according to its internet homepage, and has dozens of members, including many youths.

At a rally in Newcastle in January, masked members displayed a banner worded "Hitler was right." Its logo resembles a Nazi signet.

Responding recently to a Left party question in the federal parliament, Verfassungsschutz officials said Thuringia was a neo-Nazi focal point.

A far-right open-air rock concert at Hildburghausen, a small Thuringia town, drew 3,500 visitors on May 7.

"It is sadly fact that Thuringia has become a preferred event location for the far-right music scene, the agency's chief Stephan Kramer told the newspaper Die Welt on May 12.

Nationwide, intelligence staff had observed 15 far-right concerts in the first quarter of 2016, according to the reply in parliament in Berlin.

Also interned by the Nazis at Buchenwald were homosexuals, members of the Jehovah's Witness faith as well as beggars, the homeless and prostitutes whom the Nazis regarded as "social outsiders."