The liberation of the Buchenwald concentration camp by US troops 72 years ago has been marked with a minute's silence at the site. About 56,000 people died at the Nazi-run site and its satellite camps. 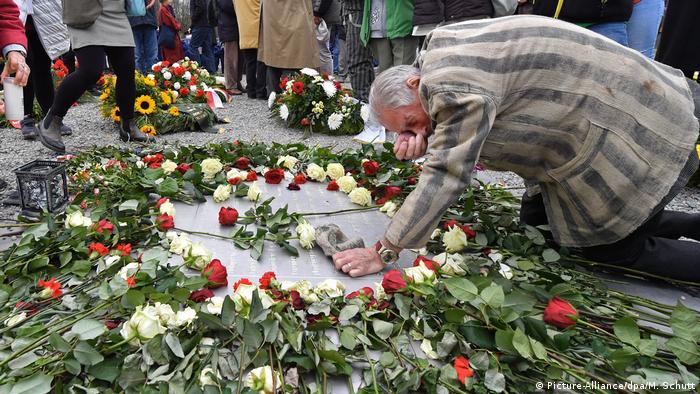 The state of Thuringia's culture minister, Benjamin-Immanuel Hoff, was among those who joined Tuesday's commemorations. The minute's silence at 3:15 p.m. (1315 UTC) marked the moment troops from the US army first entered the camp near Weimar on April 11, 1945.

There they found 21,000 survivors, including several hundred children and teenagers.

At least 56,000 people died there. They were murdered, used in medical experiments or perished due to starvation or cold while being forced to work making weapons for Adolf Hitler's war machine.

The camp, one of the first set up by the Nazi regime, grew to be one of the largest on German soil during the Second World War. Most of the initial inmates there were political prisoners, but following the Kristallnacht pogrom of 1938 many Jewish people were also sent there. People from other groups targeted by the Nazis including Poles and Slavs, Roma and Sinti, communists, homosexuals and those with mental illnesses or physical disabilities were also imprisoned at Buchenwald.

On Sunday a ceremony was held in which survivors symbolically passed on the responsibility of caring for the site and keeping the memory of what happened there alive to the younger generation.

A photo showing two presumed British neo-Nazis saluting inside a former crematorium cellar at Buchenwald near Weimar has prompted a major probe in Germany. More than 56,000 persons perished at the Nazi death camp. (26.05.2016)

Survivors mark 70th anniversary of the liberation of Buchenwald

Some of the remaining survivors of the Nazi concentration camp Buchenwald have marked the 70th anniversary of its liberation. A minute of silence was held to remember the victims who died in the camp. (11.04.2015)