Police have ended a neo-Nazi rock concert in Germany's eastern Thuringia state after legal tussles between organizers and authorities. Civic groups had held counter-vigils before the concert got underway in Apolda city. 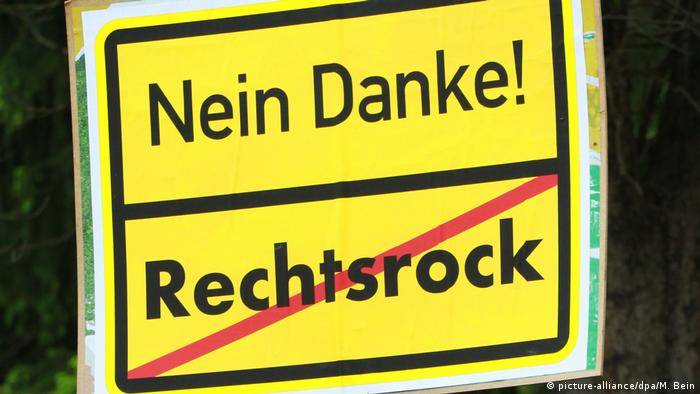 Far-right rock, no thanks

Police broke up a neo-Nazi concert in Thuringia's central city of Apolda on Saturday evening as the event turned violent after high-hurdle legal tussles between authorities and organizers over rights to assembly and public safety.

Police had fenced off one-third of Apolda's market square and subjected concertgoers to individual entry checks for the event labelled by its organizers as "rock against foreign inundation." Hundreds of counterdemonstrators who had occupied the fenced off area had earlier been evicted, said MDR.

A police spokesman quoted by the news agency AFP said some 700 people had taken part in a "registered spontaneous" counterdemonstration.

Last year, some 6,000 neo-Nazis from across Europe had attended a politicized anti-foreigner concert in the town of Themar in southern Thuringia, 120 kilometers (75 miles) from Apolda — one in a string of music events used by the far-right.

To avert repeat extreme-right turnouts, state authorities last month won court backing to deny organizers the use of disused industrial land in the township of Mattstedt, north of Apolda.

On Friday, the township of Magdala, south of Apolda, also won court backing to close off a rural access road, thereby foiling another organizer bid to shift the gathering to a large tent pitched on a local field.

Organizers then turned to Apolda, a city of 22,000 in central Thuringia, where some 750 people attended Friday's concert using a court go-ahead previously obtained from Thuringia's administrative court in Weimar. 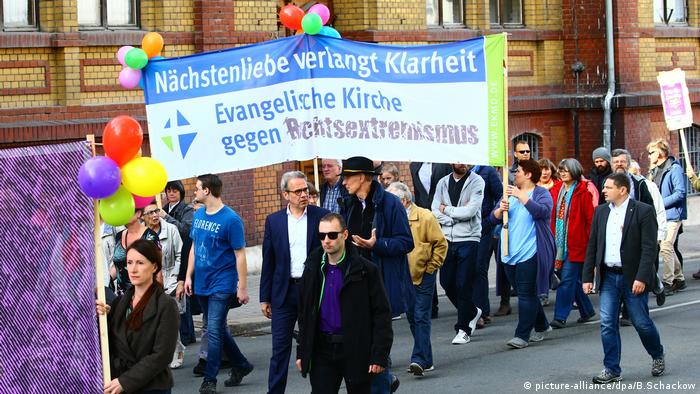 Police, who called in squads from three other regional states as well as federal police units, said they recorded 11 offenses among concertgoers on Friday evening such as belonging to unconstitutional organizations and also checked the identities of 109 concert visitors and 10 counterdemonstrators.

A further bid by organizers Saturday to shift events to a third site, the township of Kirchheim, west of Apolda, was blocked by a regional county office, according to Thuringia's Social Democrat (SPD) interior minister, Georg Maier.

Germany's diverse regional and federal police forces are under widespread scrutiny in the wake of a far-right mobilization in Chemnitz in neighboring Saxony state since late August which was preceded by the fatal stabbing of a young man, allegedly by an asylum seeker.

In the first half of 2018, 131 music events organized within the neo-Nazi scene drew 13,000 visitors across Germany, according to a federal government tally provided last month at the request of the opposition Left party in Germany's Bundestag parliament.