Thousands in Hamburg march against racism

Anti-racism demonstrators in Hamburg called for safe migration routes and an end to right-wing extremism. The march comes after the eastern German town of Chemnitz experienced several anti-immigrant protests. 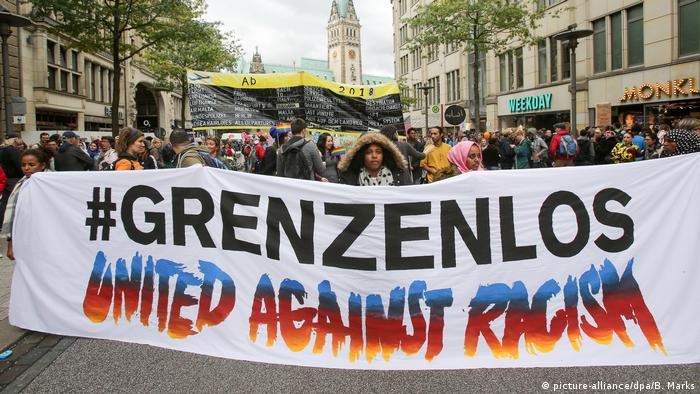 Thousands of demonstrators attended a parade against racism in the northern German city of Hamburg on Saturday, police said.

The "United against Racism" parade, a collaboration between more than 450 organizations and businesses, called for the protection of asylum-seekers, safe migration routes, an end to deportations and more to be done to stop right-wing extremism.

Among the organizations involved were the Sea-Watch migrant rescue charity and Laut Gegen Nazis (Loud against Nazis), which campaigns against right-wing extremism. Demonstrators marched alongside 40 brightly decorated trucks before the parade concluded with a concert around 6 p.m.

Participants carried signs reading "solidarity instead of division" and "hate is no opinion." Other signs said "Nazis secretly eat Turkish kebabs" and "filter coffee, not people."

"It is an uprising of solidarity and a day of resistance," said Newroz Duman, spokeswoman of the network "We'll Come United" at the end of her speech. "The problem is not called migration, the problem is called is called racism."

The march follows a series of anti-immigrant protests and counterprotests in the eastern German town of Chemnitz after a German man was stabbed to death in late August.

Two men of Iraqi descent were arrested over the stabbing. One has since been released and police are looking for a third man.

Cologne takes a stand against deportation

More than 12,000 people protested against racism across western Germany, two weeks after far-right violence in the east. The demonstrators took issue with countries like Afghanistan being considered safe for return. (16.09.2018)

An alliance of immigrant organizations has slammed Germany's interior minister for not fully condemning the recent right-wing unrest. "Defend our country's values," they said, "or leave the office to someone who does." (15.09.2018)

An anti-immigrant demonstration in Hamburg was shouted down by thousands of people protesting against xenophobia. Several other German cities have seen protests against racism and far-right violence in recent days. (06.09.2018)