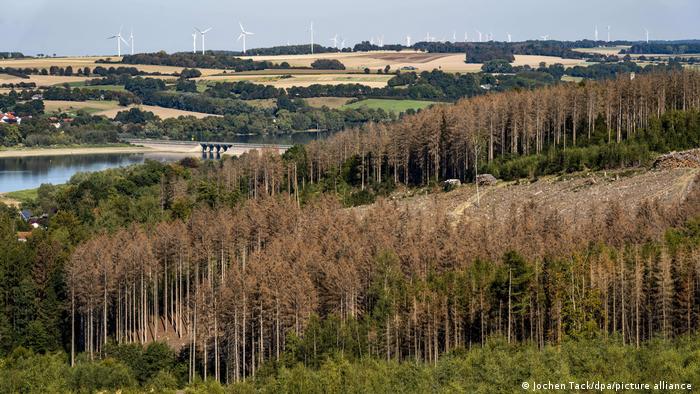 Fires, drought and a bark beetle infestation have all taken their toll on Germany's forests

Forests in Germany "are sick" and deteriorated at record levels in 2020, the agriculture minister said, commenting on an annual forest report released on Wednesday.

Forests in Germany cover around a third of the country's entire area, at 11.4 million hectares (44,000 square miles).

The report, which examines the condition of 10,000 trees each year since 1984, found that there were multiple factors causing Germany's forest decline.

A bark beetle infestation was the main cause for spruce tree deaths in the country. This was made worse due to a dry summer that enabled the beetles to get deep into barks.

The report also blamed storms, drought and forest fires in the past three years for massively damaging German forests.

What is being done to stop forests getting sick?

"We have launched the largest ecological forest reconstruction program ever," Julia Klöckner, the agriculture minister said on Wednesday.

As part of this, the government is hoping to encourage bio-diverse woodlands, with various types of tree.

The government has also already pledged about €1.5 billion ($1.8 billion) in funding to support municipal and private forest owners.

BUND nature group does not think the government is moving fast enough.