Leading German politicians sparred one last time on an array of issues on Thursday evening, with none of them landing truly telling blows in a broad closing debate.

The final debate differed from its predecessors in that seven politicians were invited, not just the three for the main parties. Joining chancellor candidates Annalena Baerbock of the Greens, Olaf Scholz of the Social Democrats (SPD) and Armin Laschet of the Christian Democrats (CDU), was Christian Lindner of the Free Democrats (FDP), Markus Söder of the CDU's Bavarian sister party, the CSU, and Alice Weidel of the Alternative for Germany (AfD) and Janine Wissler of the Left Party.

Söder's presence, in particular, drew some public attention, with criticism that the conservative bloc was essentially sending two batters up to the plate. The CSU leader, who had put himself forward as chancellor candidate, could team up with Laschet whose campaign has not been going well. 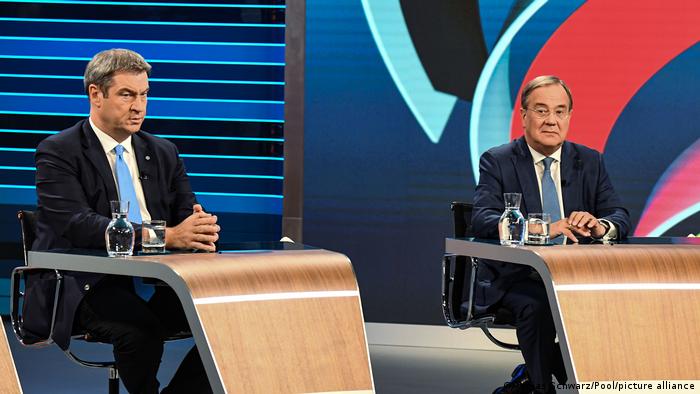 The debate took place with a final opinion poll indicating the vote would be too close to call, and potential coalition options wide open. The latest numbers compiled for broadcaster ZDF on Thursday put the SPD ahead on 25%, the CDU/CSU close behind on 23%, the Greens third at 16.5% followed by the FDP on 11%, the AfD on 10% and the Left at 6%. Whatever happens on Sunday, forming a government could be a process of lengthy negotiations and uneasy compromise.

One of the topics receiving prominent play was climate change. But rather than talk of broader policy issues, a discussion of the personal steps the politicians had taken to minimize their own carbon footprint arguably stood out more.

"I drive an electric car, and I'm having fun with it," Laschet said, seemingly slipping a little further into his regional accent as he said so.

Both Laschet and Söder mentioned how they were eating less meat, albeit without having given it up altogether.

The Greens' Baerbock, meanwhile, countered that she had been traveling "by bus, and overnight when necessary" on the campaign trail over the past seven weeks, avoiding short-haul domestic flights.

Lindner of the pro-free market FDP cast himself as a finance expert, by describing himself as "climate neutral," explaining how he bought CO2 certificates each year to "delete" his footprint. The AfD's Weidel said she rode her bike rather than a car where possible, while the Left's Wissler said she used public transport and tried to limit energy consumption at home.

Meanwhile, the SPD's Scholz stuck to his standard strategy of sober realism: He bought local produce if possible, for example, but as a "politician who is traveling in security convoys and taking many flights," he said it would be unwise to suggest he was a role model for limiting his personal impact on the climate.

On the specific policy questions of how to combat climate change, six of the seven parties broadly agreed on the need for action but differed and often quite markedly on how to achieve it. The Greens and the Left both called for an earlier German exit from coal power, currently scheduled to be finished by 2038. Scholz focused on expanding renewable energy capacities, Laschet spoke of the need to modernize the chemicals and steel industries. Only Weidel of the far-right AfD questioned that global warming was caused by humans. She called for a new generation of nuclear power plants and warned against damaging German industry.

The division was apparent on defense spending and the NATO target of 2% of GDP, particularly among the left-leaning parties. Finance Minister Scholz argued for increased defense spending "within the bounds of economic realities," while the Left's Wissler directly opposed this, saying "more weapons definitely will not make the world safer," and that the money was needed elsewhere.

But Scholz also stressed Germany's close ties with France and said he and the federal government could "very well understand" France's objections to the new AUKUS alliance between Australia, the US, and the UK that led to the collapse of a French submarine deal with Canberra.

Laschet of the CDU was asked whether he wanted the Russian Nord Stream 2 gas pipeline to Germany to start operating — this has been a controversial topic with eastern EU countries and the United States. Strictly speaking, it was supposed to be the "yes or no" segment of the debate, but he allowed himself a longer response. 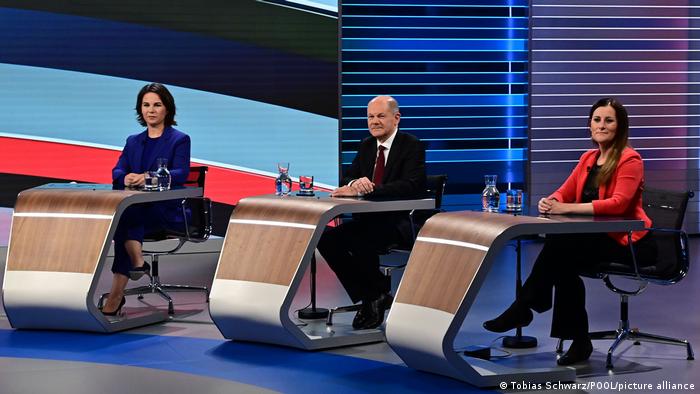 "Yes, we need this economic project, because if we are stopping other forms of energies we will need the gas," Laschet said, before adding a warning. "What's important to me is that what the government agreed to stands, namely that Ukraine as a transit country suffers no disadvantages as a result. Should Russia breach this agreement, then the deal would be stopped immediately."

Weidel's time as a postgraduate exchange in China was mentioned when the debate turned to balancing trade ties and human rights with Beijing. The AfD candidate arguably advocated the most open approach on the panel, calling for a "relaxed relationship with the Chinese." Baerbock of the Greens urged a tough stance on China and called for a "collective European China policy," while Lindner of the FDP said Germany must stand up for its business interests and its values equally.

EU under pressure to match US action over Xinjiang

The debate began by addressing domestic news this week of a man shooting dead a gas station worker who had asked the customer to don his mandatory protective COVID face mask.

This sparked discussion on security issues ranging from policing tactics to gun laws, COVID restrictions themselves and online radicalization, and the role of social media.

Baerbock and Laschet both called on internet and social media giants to crack down harder on hate speech and extremist material online. Baerbock also made specific mention of campaigns targeting her party throughout the election campaign.

Wissler of the Left Party called for the reorganization of Germany's domestic intelligence services, saying past scandals involving far-right extremist informants had shown they were not fit for purpose. Söder lashed out at the AfD for posting incendiary messages on social media platforms, driving COVID skeptics to action. But he also accused the Left Party of aiming to weaken law enforcement. Weidel, meanwhile, questioned whether the lockdown restrictions and other measures taken during the pandemic conformed with the law.

Disagreements over various other domestic policies including housing, public spending and public debt after the additional borrowing in the pandemic only served to highlight how tricky coalition negotiations could be once Sunday's votes are in and negotiations begin.

Whichever of the seven politicians in Thursday's debate take part in a future government, they are liable to make several compromises with their rivals before being able to commit.