Click, like, share: Social media have been at the heart of the Alternative for Germany's (AfD) campaign strategy since the party was founded in 2013. And it has stepped up its game ever since.

Ahead of the European Parliament elections in 2019, Der Spiegel news magazine published extensive research on how the AfD populists dominate election campaigning on Facebook.

This year, just one month before the federal election on September 26, the AfD lingers at 11% in opinion polls.

In the context of a pandemic, that makes online campaigning more important than ever. Why can't the bigger parties catch up?

Measuring the digital success of the AfD

Analyzing the parties' posts across social media from June 12 to August 15, DW found that one of the lead candidates for the AfD, Alice Weidel, was by far the most successful politician online.

Even though she has no hope of becoming the next German chancellor, her videos were viewed around 4.9 million times across the different platforms during that time period. And the number of comments, likes and shares outnumbered those of other politicians. Such engagement is considered hard currency in the world of social networks because they imply that users identify with the post to such an extent that they want to spread it further.

While the AfD has only 32,000 members, the ruling CDU still has almost 430,000 with an average age of 59, the same as that of the conservatives' top candidate Armin Laschet, who hopes to succeed Merkel as chancellor.

On social media, however, his performance is weak. His message "Smart climate protection is a cross-sectional task" mobilized only a few users on social platforms, getting no more than a few hundred likes, shares and (often unfavorable) comments on Twitter and Facebook.

In an interview with DW, Marcus Schmidt, the press officer for the AfD parliamentary group, admits that: "Without Facebook, I don't believe that the AfD could have become successful so quickly."

Using Facebook as a channel to its supporters allows the AfD to bypass established media outlets and spread its messages directly — many of which are openly racist, nationalist and factually false.

Each political party runs several pages on the social networks, including those of the federal party, the state associations and regional groups. Then there are also the personal accounts of individual politicians.

Facebook remains the AfD's most important platform for engagement. A total of 84% of Weidel's user interactions on social media take place on that platform.

It seems to have paid off that the AfD's social media team got support directly from Facebook during their initial training, as confirmed by an employee of the AfD parliamentary group in an interview with DW.

Although the Green Party and especially the pro-free market Free Democrats and their charismatic and media-savvy chairman Christian Lindner have stepped up their social media game, Weidel is still head and shoulders above her competitors in terms of total shares and comments across all platforms.

Successful posts by the AfD seek to trigger emotion: stoking fear of immigrants, crime and downward social mobility, while playing upon anger with Merkel and the country's "elites." Vivid, provocative messages and emotional catchphrases are key to the populists' social media strategy.

Weidel was successful with the catchphrase "banana republic," for example. Speaking of the handling of the recent dramatic flooding in Germany, she claimed: "Those in power let Germany degenerate into a banana republic, where citizens cannot be warned and protected against disasters despite precise knowledge of what is coming."

There were several similar posts — and they all went viral.

The snowball effect of planned provocations

The way social media networks function ensures that the party gets maximum attention, according to Felix Kartte, a Senior Advisor at Reset Tech, a non-profit organization promoting regulation for social media.

Emotional, bold, radical, and pithy — such posts attract comments and are shared, which again pays off in the algorithms, Kartte explains.

"Platforms give more extreme comments a systemic advantage because their algorithms and recommendation systems are set to privilege this kind of content because it's more engaging," he says. This leads to controversial views being overrepresented on social media, and populist parties can use this to their advantage even if they have little voter backing at the polls.

An internal AfD party strategy paper for the 2017 general election campaign explicitly encouraged members not to shy away from "carefully planned provocations" as a means of generating headlines and getting voters' attention.

Juan Carlos Medina Serrano, a political scientist at the University of Munich who has been studying the AfD's social media strategy for several years, says the party is adept at designing polarizing content to go viral: "Other parties don't make this kind of very aggressive content. So it's less shareable."

Medina Serrano sees similarities with former US President Donald Trump's successful use of social media — but also an important difference. While the Trump presidential campaigns used a huge amount of paid advertising — in 2016, Trump's team spent double as much on this as Hillary Clinton's — the AfD barely uses paid advertising at all, he says. Instead, it relies on organic content.

Firstly, the party establishes "a narrative of 'we're not getting enough media time, so support us on social media instead.'" This narrative helps the party to position itself as an anti-establishment outsider and invites potential voters to come and get their information directly from the party.

Secondly, followers are repeatedly urged to share the content to increase the party's reach, Medina Serrano explains. Politicians and party staff encourage a "constant engagement with their community" by constantly replying to comments.

Serrano also points out that the AfD may have again been setting up fake accounts.

Before the EU parliament election in 2019, fact-checkers for German public broadcaster ARD found several new Twitter accounts seemingly of young females referring to each other retweeting each others' content. One example was the account of "Beate," whose profile was found to have been lifted from a Russian page with beauty tips. Her account managed to get 1,000 followers within a month — including various AfD members of parliament as well as other accounts of alleged women who tweeted a remarkable amount.

The use of such fake accounts is difficult to quantify or prove, admits Medina Serrano. 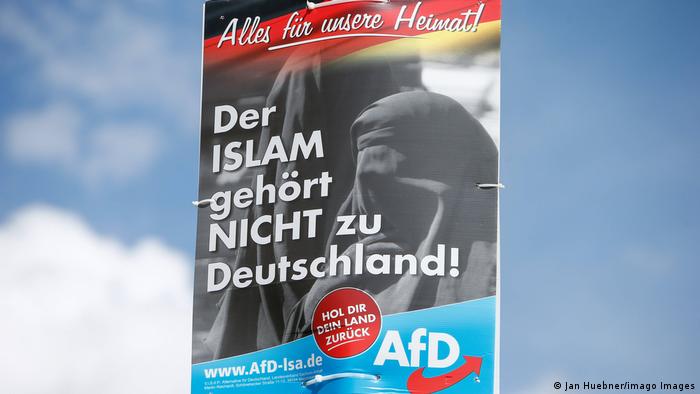 Social media companies have anti-hate speech rules for their platforms, which have been a problem to the AfD in the past.

Beatrix von Storch, a leading figure in the party, became one of the first hit by new hate-speech laws on social media in January 2018, when her accounts were blocked in response to a racist tweet.

But political campaigning remains, in effect, unregulated in Germany.

In the offline world, Germany has strict rules and restrictions for election campaigning, like limiting the time campaign billboards can stay up or restricting time slots for campaign ads on TV — but no such restrictions have been put in place for online campaigning.

Social media campaigning is "basically the Wild West," Felix Kartte points out, "And this benefits the AfD,"

The AfD, however, rejects calls for a voluntary commitment by all parties to a fair and transparent election campaign. In an interview with DW, the press spokesman for the AfD parliamentary group, Marcus Schmidt, calls corresponding initiatives a "show" to discredit his party.

In view of the growing importance of social media, a civil alliance of trade unions and initiatives in Germany is calling for a voluntary commitment by political parties to fair and transparent election campaigns on the internet. Paid political messages would have to be labeled. And hate comments under posts should be deleted by the parties themselves.

This is why Reset Tech wants to establish clear rules for online campaigning. For Kartte, the disproportionate space achieved by the AfD by social media platforms represents a danger for democracy.

Facebook and Instagram's parent company, Meta, has been designated as an "extremist" organization by a Russian court. But Meta's WhatsApp is excluded from the ban.