Euphoria is spreading among the Social Democrats. Candidate Olaf Scholz has a good chance to succeed Angela Merkel and he's out wooing voters. Sabine Kinkartz hit the road with his campaign ahead of the election. 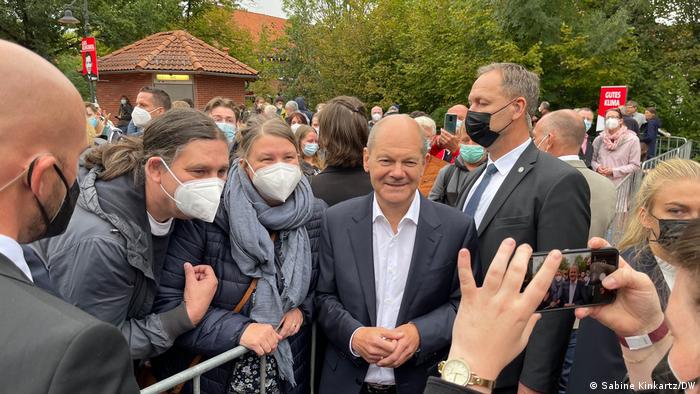 A long line has formed in the Lower Saxony town of Soltau — the elderly, young, mothers with children, someone from the SPD youth wing who wants an autograph in their membership book. They all want a selfie with Social Democrat (SPD) chancellor candidate Olaf Scholz, whose popularity has soared in recent weeks. One by one, they hold out their phones and lean into Scholz as far as the barrier that separates the 63-year-old from the crowd allows.

"How's it going?" asks the candidate, chatting a little and smiling relaxed into the cameras. He is present and attentive, although it's his third campaign event of the day — and won't be the last. They all follow the same pattern: Half an hour of unscripted speaking on a stage, followed by questions from the audience. Between the appointments Scholz gives interviews, some of which are broadcast on national news programs.

It's incredible how energetic "Olaf" remains after the exhausting campaign, says SPD general secretary Lars Klingbeil, who is running for the Bundestag in Soltau and joined Scholz for a walk through the town. "You get the sense that he could keep going with this feat of strength for three more months," Kling bell says.

But it's not the many cups of coffee or giving up alcohol that obviously inspires Scholz — it's the prospect of an election victory within reach. In quiet moments, the normally reserved and unemotional politician has a smile on his face. "My feeling is that the SPD is doing even better than it shows in the polls," he says. 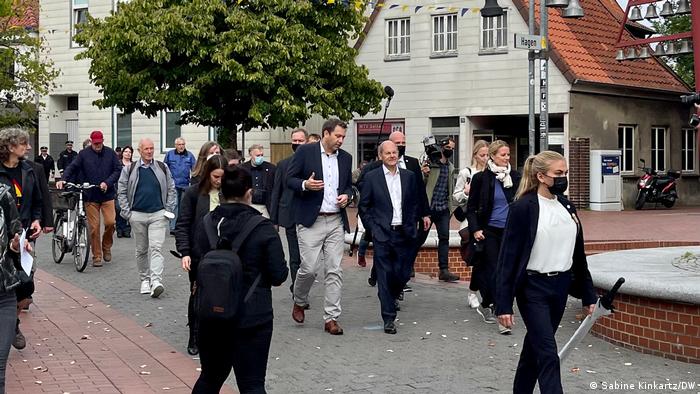 Scholz knows what it's like to win an election. "It feels to me like it did in 2011, when I first ran for mayor of Hamburg," he says. The current momentum also reminds him of 1998, the year the SPD won the general election and sent the conservative government into opposition, and when Gerhard Schröder became chancellor.

The SPD has been in the lead over teh Christian Democrats (CDU) in preelection polls only three times in Germany's history: 1972, 1998 and 2002. Now, in 2021, it has happened again. Klingbeil speaks of a "historic opportunity" for the party.

Scholz says the atmosphere is "remarkable." He says he can see it in people's faces when they listen to him: "They seem cheerful, and I get the sense there's a new beginning." 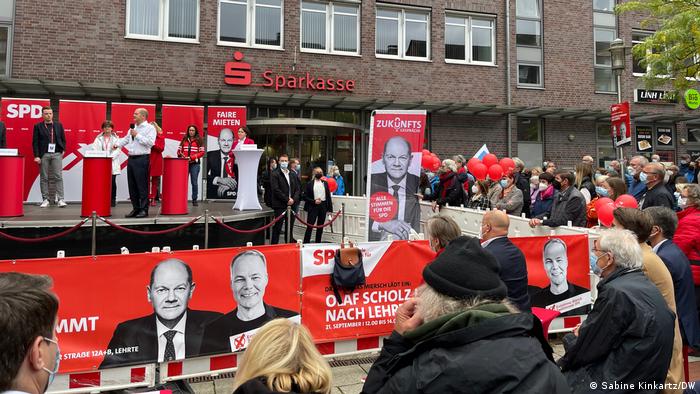 Scholz, the omnipresent candidate, is the SPD's main selling point

No catcalls, no booing

There are about 500 people in the audience in Soltau, similar to the crowd in the town of Lehrte three hours earlier. Many of them have already cast their postal ballots for the SPD and have come to see the man they hope will become chancellor. They clap and cheer him on — not a whistle, jeer or boo to be heard. The only disturbance comes from two climate activists who are loudly trying to draw attention to themselves.

When they won't stop, marshals push them away. Scholz reacts by changing the topic to the climate activists who have been on hunger strike in Berlin for days. They should stop their protest, he says, because a hunger strike is not the right way to deal with the issue. 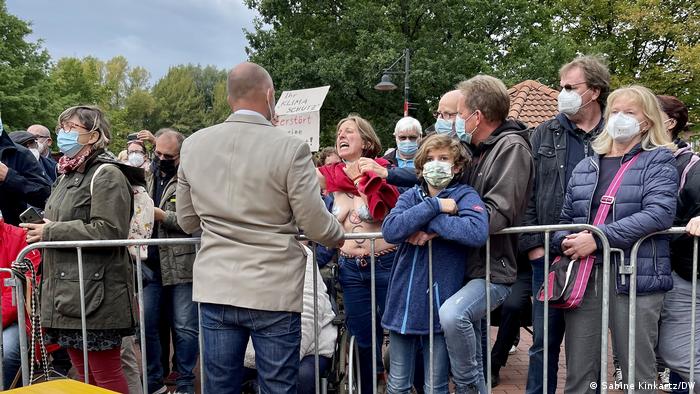 Be it climate protection, modernizing the economy, the costs of the coronavirus pandemic or the pension system — in his speeches, Scholz leaves no doubt that Germany is facing enormous challenges. But he is always quick to add the message that, come what may, an SPD-led government can cope with the task.

"How do we get through this time safely? How can we manage all these changes which are happening? How can we trust that it will all be OK?" he asks, then gives his answer. "Give us your votes, then I can form a government which will do as we have promised — pragmatically, looking toward the future."

"He has such a calm, certain manner," says Dirk Hempel, who came with his wife to the campaign event in Lehrte. "For the next few years, we need someone who can be relied on and who can lead the country through difficult times." 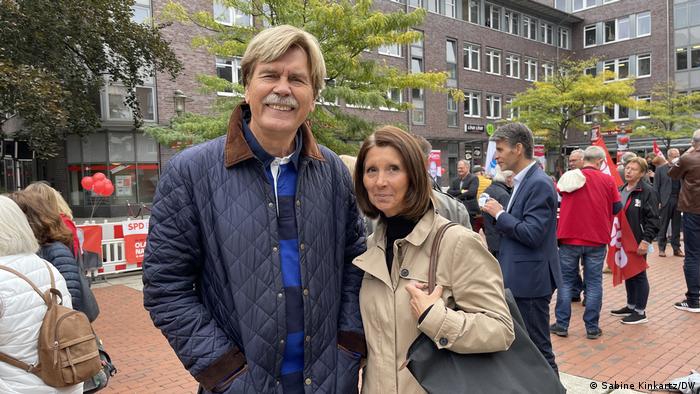 Supporters at the event seem little bothered by financial scandals such as Wirecard and Cum-Ex, which have cast Scholz as finance minister in a bad light, or the recent raid of the Finance Ministry in connection with investigations into the anti-money laundering authority FIU. "Every politician has some skeleton in his closet," one woman says.

The financial scandals also don't matter to Angelika Weidner. "It is all so complicated," she says. "Most of the time, I turn off the television when it's on the news." She stands with her bicycle at the edge of the event and listens intently as Scholz speaks about rising prices and rent. "Everything is getting more and more expensive," she says, adding that it would be good if something were done about it. 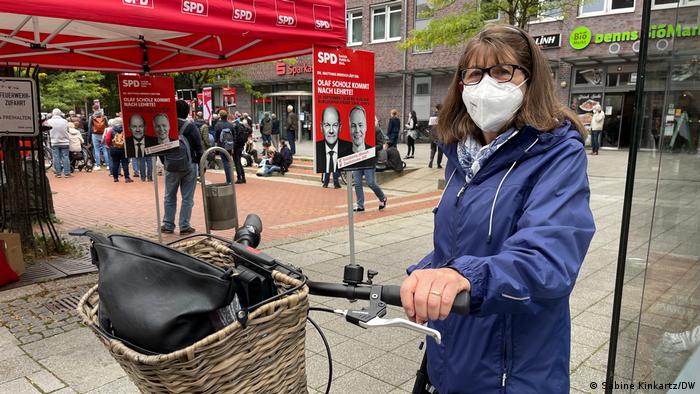 With whom would the SPD govern?

A woman who did not want to give her name says she just cast her postal vote — for the first time in her life, it was for the SPD. "I have always voted for the Christian Democrats, but I don't like [CDU chancellor candidate] Armin Laschet." However, she would "very strongly hope" that the SPD would not form a coalition government with the socialist Left Party.

Spectators at the campaign event are interested in the possible governing coalitions that could emerge after the election. That is clear from the questions coming from the audience. Many could envision an SPD coalition with the Greens, but there are considerable reservations over teaming up with the Left Party.

Inner-party struggles on the horizon?

In the past, Scholz has indicated that he's no fan of the idea of an SPD-Greens-Left coalition government. But it's unclear how much power he will have within the SPD itself after the election. After all, back in 2019, Scholz lost the race for the party chairmanship to Saskia Esken and Norbert Walter-Borjans. Both were supported by Kevin Kühnert, who was then the head of the party's youth wing head and is currently a Bundestag candidate and the SPD's vice president. The left-wing trio would demand a considerable say in the formation of a government — that much is certain.

Would the SPD be able to maintain unity in the face of an internal power struggle? Scholz's confidence is unshakable these days. "The SPD has experienced that we succeed when we act in unity, as we do now. We want to be like this, and we can. The party will not forget this experience."

This article was translated from German. You can find DW's election coverage including profiles of the other candidates here.

Olaf Scholz is the Social Democrats' candidate as German chancellor to succeed Angela Merkel. There is no doubting his experience and his ability to handle a crisis. And now he looks set to become his party's savior.

Angela Merkel took a rare foray into partisan campaigning in parliament in a session just weeks ahead of national election. The chancellor not only lauded her own government's record but also took aim at the poll leader.