Germany's coalition government has agreed to earmark a budget of 6 billion euros to fund the care of migrants coming into Germany. Thousands more refugees reached the country over the weekend. 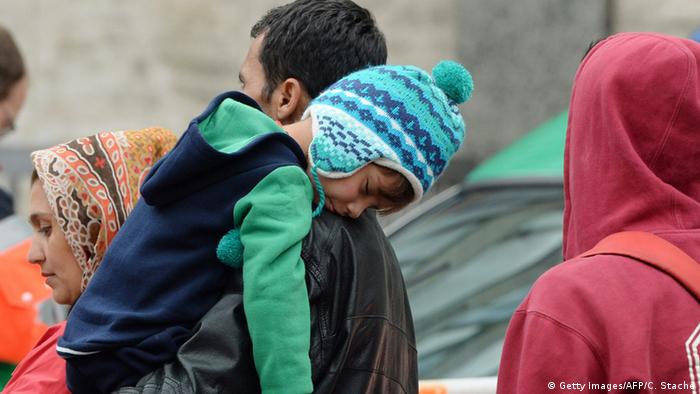 Chancellor Angela Merkel's coalition has agreed to include 3 billion euros ($3.3 billion) in the 2016 budget, and has set aside a further 3 billion euros to help states and local governments.

During late night talks in Berlin, the leaders of the Christian Democratic Union (CDU) and its sister party Bavaria-based Christian Social Union (CSU), along with the Social Democrats, discussed whether asylum seekers should be given material assistance rather than cash. The topic had been a key point of conflict ahead of the talks.

The decision came after the weekend arrivals of thousands of migrants from Syria and elsewhere, many of whom had spent days waiting to travel on from Hungary, walking and sleeping with their families in the open air. They were welcomed at train stations in Germany and taken to temporary accommodation.

Senior Social Democrat Thomas Oppermann said he was satisfied with the outcome of the meeting, writing on his Twitter account that there had been a "good outcome."

"No decent person can remain cold and dismissive in the face of such suffering," he said.

Over the weekend, Merkel had come under fire from some members of her own party and the CSU. They had criticized the decision to open Germany's borders to migrants and refugees in Hungary over the weekend.

Most of the migrants arrived in Munich before being taken to accommodation in other cities including Dresden, Hamburg, Frankfurt and Dortmund.

Many Germans have welcomed the migrants, with large groups of people turning out to offer food, drinks and toys for the children. But far-right groups have protested their arrival.

Simone Hilgers, a spokeswoman for the government of Upper Bavaria, said some 8,600 people have arrived at Munich's main train station since Sunday morning.

Hilgers said Munich was well prepared for the new arrivals but that the state needed help to meet the challenge of caring for the migrants. "Munich and Bavaria can't manage it alone," Hilgers said on Sunday. Bavaria "needs the support pledged by other [German] states."