Far-right protesters have jeered German Chancellor Angela Merkel as she arrived at a refugee center in Heidenau. Merkel had previously criticized the xenophobic protests against migrants in this small town. 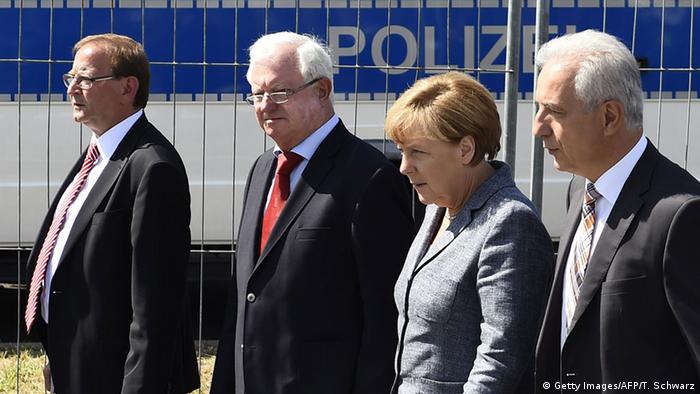 Some 200 far-right protesters shouted "traitor, traitor" as Angela Merkel arrived at an asylum center in the eastern town of Heidenau near Dresden. DW's Naomi Conrad was on hand in Heidenau:

They also honked their horns as they passed by the German chancellor from across a road.

"We must direct all our efforts on making clear: There is no tolerance of those who call into question the dignity of other people," Merkel said in Heidenau.

"Everyone facing political persecution or fleeing civil war has the right to be treated fairly when seeking asylum," Merkel said, as she interacted with some of the 600 refugees in the shelter.

On Monday, Merkel slammed the violence committed by far-right demonstrators and their supporters outside the Heidenau asylum center as "shameful."

"I condemn in the strongest possible terms the violent outbursts," Merkel told reporters in Berlin. "There was an aggressive mood against foreigners there that isn't acceptable in any way."

Merkel also condemned the locals who stood by observing as far-right extremists attacked police trying to ensure the safe arrival of the refugees at the shelter.

"It's repulsive how far-right extremists and neo-Nazis are spreading their hollow message, but it's equally shameful how citizens - even families with children - support this by marching along," she said.

Tensions regarding immigrants are high in Germany as the right-wing groups demand the government repel the asylum seekers coming from conflict-ridden countries like Syria, Iraq and Libya. People fleeing war and poverty in North Africa and the Middle East are seeking refuge in European countries, with most of the people turning up on the shores of Italy and Greece or being rescued at sea. Many of these people who arrive in Southern Europe want to move on to richer EU countries and claim asylum there.

On Wednesday, German President Joachim Gauck visited a refugee home in Berlin in the face of a rising number of attacks on asylum seeker accommodation from right-wing extremists.