Chancellor Angela Merkel has condemned violent protests outside of a shelter for asylum seekers in a town in the east of Germany. Merkel had been criticized by some for not coming out against the far-right earlier. 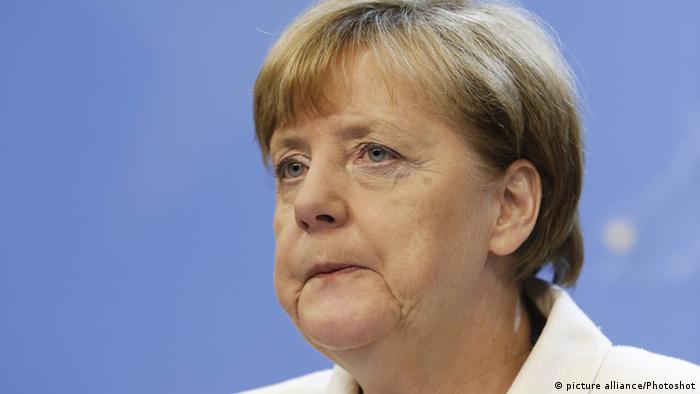 Chancellor Merkel told reporters in Berlin on Monday that violence committed by far-right demonstrators and their supporters outside near the shelter in the town of Heidenau near Dresden was "shameful."

"I condemn in the strongest possible terms the violent outbursts," the chancellor said. "There was an aggressive mood against foreigners there that isn't acceptable in any way."

Chancellor Merkel also condemned the locals who stood by observing as far-right extremists attacked police trying to ensure the safe arrival of the refugees at the shelter.

"It's repulsive how far-right extremists and neo-Nazis are spreading their hollow message, but it's equally shameful how citizens - even families with children - support this by marching along," she said.

Earlier in the day, the chancellor had broken her "silence" on the issue through her spokesman, Steffen Seibert, who told a press briefing that Germany does not tolerate "hate-filled slogans or threats coming from drunken loudmouths" targeting asylum seekers.

Over the weekend, the chancellor had been criticized for some for not speaking out earlier against the violence, which broke out ahead of the arrival of the first refugees at Heidenau.

Hundreds of people took part in what was at first a peaceful march organized by the far-right National Democratic Party, or NPD, on Friday evening. But later, some tried to block the access road along which the buses carrying the migrants need to travel to reach the shelter.

As police moved in to clear the way for the buses, things began to turn ugly, with some protesters pelting officers with rocks, bottles and firecrackers. Dozens of police officers were reported injured over the weekend, including on Sunday, when left-wing protesters, demonstrating in support of the refugees, clashed with right-wing extremists. Police have brought in reinforcements and set up a protective perimeter around the camp.

Also on Monday, Merkel's deputy chancellor and economy minister, Sigmar Gabriel visited Heidenau in a show of support for the migrants - and the local authorities trying to cope with the situation.

"We must not give even a millimeter to these people, who have spread out here during the last few days," Gabriel, who is also the chairman of the Social Democrats.

Meanwhile, in the southwestern state of Baden-Württemberg, an empty building that was slated to be converted into a shelter for refugees was destroyed by a fire, officials announced on Monday. An investigation into what caused the fire in the building in the town of Weissach took place, and officials said that arson had not been ruled out.

German politicians have voiced outrage after a second night of protests against a refugee home in the eastern town of Heidenau. A police union accuses lawmakers of lacking ideas for coping with a growing refugee crisis. (23.08.2015)

German Interior Minister Thomas de Maiziere has condemned violent protests against a refugee shelter in the eastern town of Heidenau. At the same time, he highlighted a spirit of giving demonstrated by other Germans. (23.08.2015)