German arms exports dip, but still near record highs | Germany | News and in-depth reporting from Berlin and beyond | DW | 14.06.2017

Germany has claimed that its arms export policy is "responsible and restrictive" after a new export report shows a dip in sales. But one of the customers is Qatar, a country Donald Trump called a "funder of terrorism." 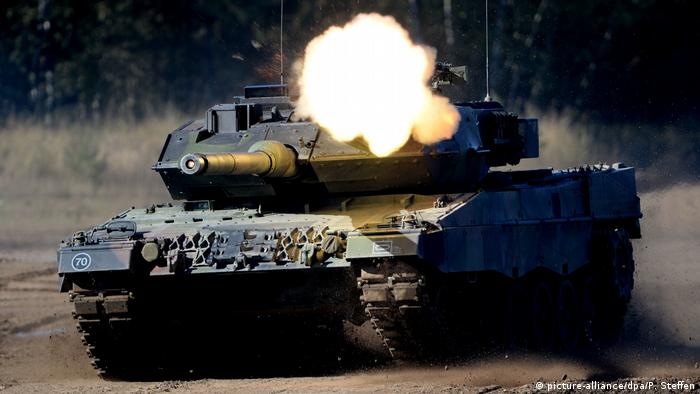 The German Economy Ministry thought it had some good news to offer as it presented the 2016 arms export report to Chancellor Angela Merkel and her cabinet on Wednesday. According to the Handelsblatt newspaper, which received an advanced copy, the German government approved 6.85 billion euros ($7.67 billion) worth of military equipment sales in 2016 - down from 7.86 billion euros in 2015.

The Economy Ministry is run by Brigitte Zypries of the center-left Social Democratic Party (SPD), which has made reducing Germany's arms exports one of its key policies - and so far things haven't exactly gone to plan. Since the current government took office in 2013, the total number of approved sales has risen, and even 2016's 6.85 billion euros is the second-highest turnover for Germany's arms companies. 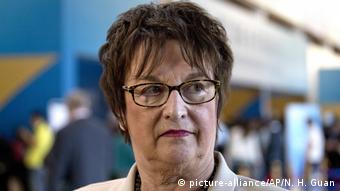 Zypries' Economy Ministry was keen to see the glass half full

In a statement on Wednesday, the Economy Ministry was keen to suggest that there were plenty of mitigating details behind the figures. For one thing, it said, these sales included items that weren't used for killing people - such as mine-clearing equipment and a set of armored vehicles for transporting civilians delivered to UNICEF in Syria.

"Even the export of a wrecked submarine from the Second World War to a military history museum goes into the arms goods statistics," the statement pointed out.

But opposition politicians weren't buying these excuses. "That's right, but I'd guess that of the 7 billion euros, that might be 2 percent - it's really silly, that argument," said Jan van Aken, the Left party spokesman for weapons export policy. "With the mine-clearing equipment, we're probably talking about a lot less than a million euros. It's all peanuts, compared to the rest."

When the arms export reports are released, peace activists pay particular attention to the sales of small arms, which account for the vast majority of conflict deaths, and whose distribution and use after the point of sale can barely be controlled. Here, the numbers weren't so friendly to the SPD's intentions: the new report showed that Germany sold 46.9 million euros worth of small arms around the world in 2016 - 15 million euros more than the year before.

But the government was keen to explain this figure with an increase in sales to "partners," the term used for fellow members of NATO as well as EU members. So-called "third countries," the ministry said, were getting about as many guns as before.

"The value of [small arms] sales to third countries has remained roughly the same at the historically low level of the year before, at 16.4 million euros," the Economy Ministry said. The figure for 2015 was 14.5 million euros.

The small arms sales also included 2.8 million euros worth of guns for Kurdish fighters in northern Iraq - officially sent to support their fight against the so-called Islamic State. 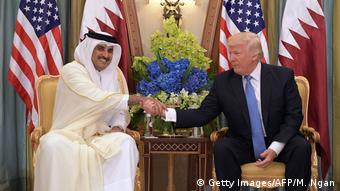 Trump shakes hands with the leader of a country he believes is "historically ... a funder of terrorism"

"We think that's totally wrong, particularly at the moment it's completely wrong," van Aken told DW. "Because at the moment the Kurds aren't using it for their fight against IS, but in the fight for their independence. They were supposed to protect the Yazidis and in the last few months they've been attacking the Yazidis. I think those deliveries were catastrophic."

There is evidence that van Aken is right: a video released in late April by leftist blog Lower Class Magazine showed German Dingo vehicles being used by Kurdish Peshmerga fighters in an assault on the Yazidi town of Khanasor in northern Iraq, though the German government doubted the veracity of the video.

They weren't the only problematic recipients. There have also been major sales to Egypt (a submarine), and Algeria (a warship) - both countries with bad human rights records. Some 790.5 million euros worth of weapons were also sold to Qatar - a country involved in thewar in Yemen and now involved in a crisis with its only neighbor Saudi Arabia. US President Donald Trump declared last week that, in his opinion, "The nation of Qatar, unfortunately, has historically been a funder of terrorism at a very high level."

Barbara Happe, spokeswoman for the NGO Urgewald, said the sales of military weapons and equipment to third countries were always a big problem. The report shows that over half of Germany's arms sales - some 3.67 billion euros worth of military equipment - went to such countries in 2016, and that 90 percent of that went to Algeria, Qatar, and South Korea.

"Qatar is particularly problematic," Happe told DW. "And with them it's Leopard tanks that were approved, that are going to be delivered over time."

Happe, for one, has now lost faith that the SPD's Economy Ministry is really able to reduce arms sales.

"They've had four years now," she said. "And there have always been projects that were very problematic - exports to Qatar, submarines to Egypt or to Israel, countries that are involved in war. There have always been small changes, but there has never been a clear reduction."