A Saudi official has told "Der Spiegel' magazine that good relations with Berlin come before arms deals. This comes as Chancellor Merkel, on a visit to the kingdom, called for an end to Saudi-led airstrikes in Yemen.

Saudi Arabia intends to refrain in future from asking for more weapons from Germany, and to concentrate instead on economic cooperation in other sectors, according to an interview in the German news magazine "Der Spiegel" published on Sunday.

"We accept the German reticence with regard to exports to Saudi Arabia; we know the political background," Saudi Deputy Economy Minister Mohammed al-Tuwaijri told the magazine.

"We will not cause any more problems for the German government with new requests for weapons," he added.

Al-Tuwaijri said the reason for the change was a desire for closer cooperation with Berlin in areas other than arms, with Riyadh aiming to make Germany one of its "very most important economic partners."

"Relations with Germany are much more important to us than arguing about weapons deals," he said.

German weapons deals with Saudi Arabia have been controversial for many years, with the kingdom frequently the target of criticism for its poor human rights record.

Among other issues, the country's involvement in the long-running war in Yemen, in which many civilians have died in airstrikes carried out by warplanes from a Saudi-led Arab coalition, has raised fears that German arms were being misused.

According to preliminary figures, in 2016 Germany exported armaments to Saudi Arabia to the tune of more than half a billion euros. 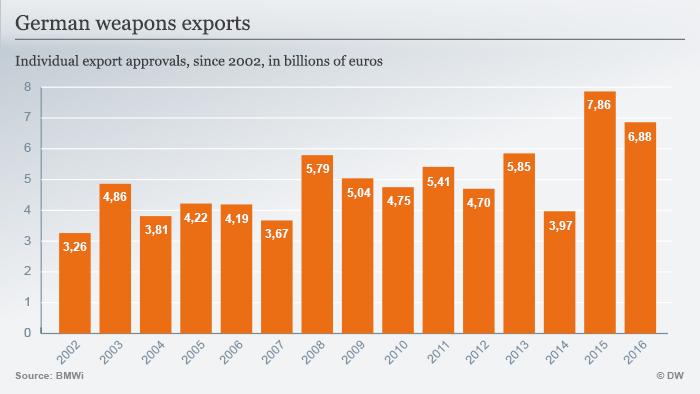 Germany is a major arms exporter

The interview was published as Chancellor Angela Merkel arrived in the kingdom on Sunday for talks with Saudi King Salman and other officials. There were no representatives of armaments companies in the business delegation accompanying her, though the German government has previously said that weapons could still be delivered to Saudi Arabia on a case-by-case basis.

At the talks in the commercial hub of Jeddah, Merkel called for an end to the Saudi-led airstrikes in Yemen.

"We believe in the UN-led process of diplomatic resolution," she said. "We do not think that there can be a military solution to this conflict." 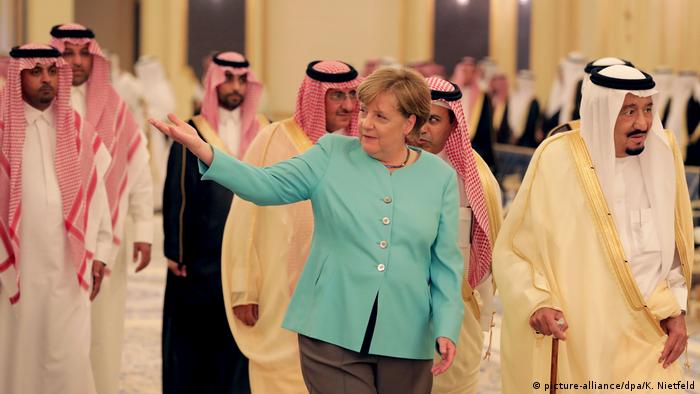 Merkel's visit is aimed at deepening economic and security ties

She said something had to be done to prevent even more people in the already impoverished country from being brought into an "extremely bad humanitarian situation," while conceding that Saudi Arabia was not the only party that had to accept compromises.

The Saudi government has been intervening in the war in Yemen for more than two years, leading a Sunni Arab coalition that has been bombing positions of Shiite Houthi rebels, which Riyadh sees as proxy forces for its regional rival, Iran. In view of the large number of civilian casualties in the strikes, even the United States, a close ally of the kingdom, has called for the attacks to cease.

Despite German reservations about Saudi military actions, an agreement was signed during Merkel's visit that provides for German Bundeswehr soldiers to help train their Saudi counterparts, a government spokesman in Berlin said.

Under the deal, Saudi soldiers are to receive training at Bundeswehr facilities, the spokesman said, giving no further details.

A declaration of intent was also signed on police training cooperation, according to information from the government. The scheme would see German federal police giving instruction to Saudi border police, among other things.