Civil war and geopolitical rivalries have brought Yemen to the brink of collapse two years since a Saudi-led intervention against Houthi rebels. With famine looming, all signs point to the situation getting worse. 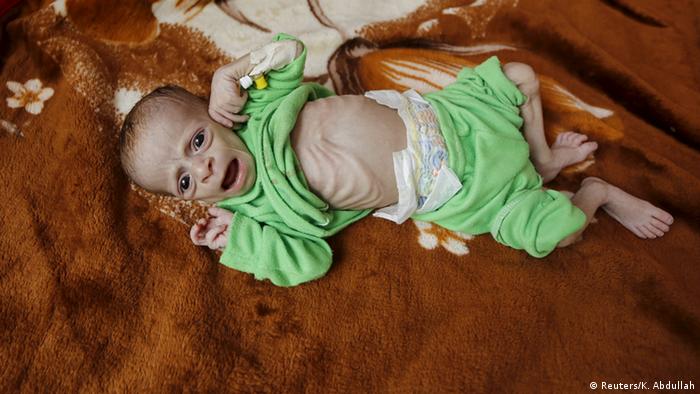 Facing destructive fighting, hollowed out institutions and a looming famine, Yemen is on the verge of irreversible collapse two years since a Saudi-led Arab coalition intervened to restore the internationally recognized government.

The stated aim of the coalition - which also includes Qatar, the United Arab Emirates, Egypt and Bahrain - was to restore President Abed Rabbo Mansour Hadi to power and counter alleged Iranian influence.

But what started as largely a domestic political conflict has morphed into a broader regional power struggle between Saudi Arabia and Iran, with multiple armed actors on the ground fighting a war with no end in sight.

"Two years in we are looking at a situation where the most likely scenario is that two years from now we will be looking at continued conflict in Yemen," said Adam Baron, a visiting fellow at the European Council on Foreign Relations. "Yemen is the world's biggest humanitarian crisis, and at this current period and looking forward all signs are pointing to it getting worse."

Civilians in the Arab world's poorest country have borne the brunt of the war. Fighting and indiscriminate bombings, especially by the coalition, have destroyed infrastructure, schools and hospitals. Human rights organizations accuse all sides of committing possible war crimes.

More than 7 million people face the risk of starvation in the next months if they don't receive food assistance, while 19 million people - two-thirds of the population - are in need of humanitarian aid. The conflict has displaced 3 million people, left nearly 8,000 dead and injured more than 42,000.

How did it start?

Houthi rebels swept down from their northern stronghold and took control of the capital, Sana'a, in September 2014. Hadi fled after being forced to resign in January, first to Aden and then to Saudi Arabia after Houthi allied forces briefly took the southern port city and other territory in the south and west.

By the summer of 2015, Hadi loyalists backed by tribesmen and southern secessionists had restored control of Aden and large parts of the south with the help of the Saudi-backed coalition. By early 2017, pro-government forces had advanced along the Red Sea in a bid to take the Houthi-held port of Hodeida, but have remained largely stalled in central Yemen.

Meanwhile, Hadi set up a provisional government in Aden in September 2016. Two months later, the Houthis and Saleh set up a separate government in Sana'a, effectively putting an end to UN-backed talks to end the conflict.

State collapse has given al Qaeda in the Arabian Peninsula (AQAP), considered the terror outfit's most dangerous branch, and the so-called "Islamic State" room to operate.

Who are the Houthis?

The Houthis are followers of the Zaidism, an offshoot sect of Shi'ism. Accounting for about a third of the population, they have long complained of discrimination and marginalization by governments in the capital.

The Houthi movement emerged in the 1990s, largely in response to a rising tide of Sunni Islamic political movements such as Salafism and the Muslim Brotherhood-tied Islah Party.

Underlining the conflict's domestic origins, Houthi militias fought six wars with former president Saleh's army between 2004 and 2010. As in other countries, the 2011 Arab Spring thrust Yemen into turmoil that strengthened non-state actors, including al Qaeda, after Saleh was forced to step down and was replaced by Hadi.

The Houthis largely participated in the post-Saleh political transition before it broke down in 2014 and have since forged an alliance with the former president.

"The story of the Houthis' rise to power shows that they are motivated primarily by a domestic agenda, rather than a regional one," Joost Hiltermann and April Longley Alley of the International Crisis Group wrote in February.

Saudi Arabia accuses the Houthis of being an Iranian proxy akin to the Lebanese Shiite militant group Hezbollah, but their relationship with Tehran is more complex.

While Iran provides some financial, military and media help to the Houthis, analysts say the relationship is more one of convenience and not one of direct control.

"Just because the Houthis maintain a relationship of mutual convenience with Iran doesn't mean they are an Iranian puppet group," Baron said.

The Houthi uprising is driven by domestic factors, but Fathollah-Nejad noted Tehran's regional policies are run by the Islamic Revolutionary Guard Corps, which has viewed Yemen as an area to project power for over a decade.

"It cannot be denied that Iran tries to bog down the Saudis in a quagmire that is Yemen," he said.

Houthi forces have regularly fired missiles into Saudi Arabia since the intervention.

For Saudi Arabia, intervention in Yemen was largely a war of choice. Its young defense minister, Deputy Crown Prince Mohammed bin Salman, launched the war shortly after coming to power at a time Iran was moving towards ending its international isolation over its nuclear program. 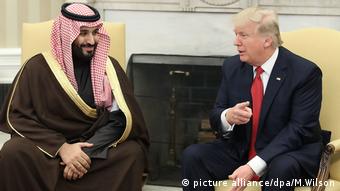 Mohammed bin Salman and Donald Trump met at the White House on March 14.

The US controversially threw its support behind the Arab coalition - providing intelligence, air-refueling and weapons - in a sign of solidarity at a time when Riyadh was worried about Iranian influence in the Middle East.

"The Houthis do pose threats to Saudi Arabia's (KSA) national security interests, not least because they are unlikely to allow KSA to pull the strings in Yemen or have the influence KSA once had," April Longley Alley of the International Crisis Group said. "But whatever diagnosis of the threat, the reaction was a war of choice that is having devastating consequences for Yemen and Saudi security."

According to Amnesty International, the US and UK have sold $5 billion (4.6 billion euros) worth of weapons to Saudi Arabia since March 2015, helping it commit "gross violations" and "precipitate a humanitarian catastrophe."

The risk is that the United States, viewed by the Houthis as an active participant in the conflict, gets dragged into Yemen as the Trump administration takes a harder line against Iran.

In October, the US military said one of its ships in the Red Sea was targeted by Houthi rebels with the support of Iran, prompting the US Navy to destroy rebel radar installations. That attack came days after the Houthis attacked a United Arab Emirates ship in the Bab al-Mandab strait. In January, Houthi rebels attacked a Saudi frigate in the Red Sea.

"There is nothing the Iranians would like more than to drag the US into Yemen," Baron warned.

The Trump administration has upped US involvement in Yemen in other ways, carrying out dozens of airstrikes on AQAP and a botched raid in January.