Germany sells arms to UAE despite Yemen conflict | Germany | News and in-depth reporting from Berlin and beyond | DW | 14.04.2017

Germany has approved more major weapons deals with the UAE, including deliveries of medium-caliber ammunition. The UAE is involved in a conflict in Yemen that has caused famine and humanitarian disaster. 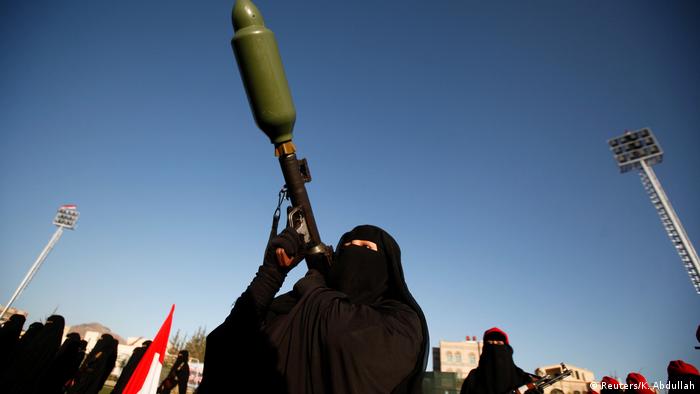 Germany is supplying more weapons to belligerents in the Yemen conflict, even though the ongoing war in the Middle East's poorest country has triggered a famine and a refugee crisis.

Citing an Economy Ministry document delivered to parliament, both "Der Spiegel" and the "taz" newspaper reported this week that the German government approved the sale to the United Arab Emirates (UAE) of 203,448 detonators for 40-mm shells by the Rottweil-based company Junghans Microtec, as well as 126 million euros ($134 million) worth of armor-plating for military vehicles by Dynamit Nobel Defence, located in Burbach, North Rhine-Westphalia.

The sales show that Germany is continuing its policy of arming countries in the Middle East despite their direct involvement in the Yemen conflict, and despite the German government's policy of vetting arms deals for potential humanitarian impact.

The political opposition was quick to condemn the new sales. "Once again, the government is waving through the delivery of military equipment to a war participant in the Gulf region," said Agnieszka Brugger, the Green party's defense policy spokeswoman. "Instead of finally stopping all arms dealing with the states participating in the bloody war in Yemen, the CDU and SPD [Germany's governing coalition parties] are ignoring Germany's arms export guidelines once again." 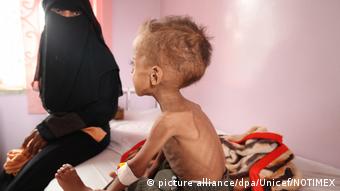 Famine is taking hold in Yemen amid the war

When asked, the Economy Ministry insists that Germany's arms export controls are among the toughest in the world, but that hasn't stopped the country staying among the world's top five arms exporters for many years.

Export guidelines, which are not legally binding, are supposed to prevent the sale of "offensive" military equipment, equipment that could be used against peaceful demonstrations, or the sale of military hardware to countries that commit human rights abuses. Also, German weapons exports typically come with "end user certificates," which are meant to guarantee the buyer will not pass on the weapons to other parties.

But the sale of detonators for 40-mm ammunition to a country that is likely to use them in a long-running war demonstrates that these guidelines are often ignored when the German government decides that a sale is in its strategic interests. In 2016, Germany sold the UAE 154 million euros worth of military equipment, putting it in ninth place among the country's best customers.

Sebastian Schulte, Germany correspondent for the military magazine "Jane's Defence Weekly," explained that, despite the war in Yemen, "the UAE is considered a stable partner in an otherwise difficult region."

"It is important to understand that the UAE's security requirements go beyond its participation in the recent Saudi-led Yemen military intervention," Schulte told DW. "These arms exports do not imply Germany's consent or support for the ongoing intervention in any shape or form by themselves. The current sales are part of a long-term security and stability commitment with the UAE and are fulfilling contracts that have been concluded years ago."

"With large-caliber 40-mm ammunition, military and civilians can be shot and killed at a distance of several hundred meters," Grässlin told DW.

The news of the arms sales came in the same week that aid organization CARE International presented a new report in Berlin warning that 7 million Yemenis were facing starvation as a result of the two-year conflict in Yemen, which has already claimed 10,000 lives. The United Nations is organizing a donors' conference at the end of April to try to raise money to prevent the humanitarian disaster getting further out of control. 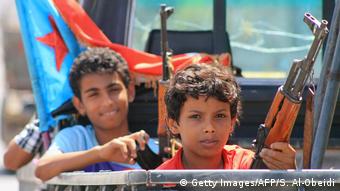 Child soldiers are also fighting in the conflict

The international community has condemned the Saudi intervention in the conflict, which many see as a sectarian proxy war between the Saudi-backed Hadi government and Houthi fighters, allegedly backed by Iran. The UAE is part of the Saudi-led coalition, which has sent ground troops into Yemen, unleashed airstrikes on civilian areas, and allegedly hired mercenaries to fight in the country.

The German Economy Ministry is under the aegis of the Social Democratic Party (SPD), whose last election campaign platform in 2013 included promises to curb German arms sales. But though those sales dropped slightly in 2016, they remain at the second-highest level of all time - with Germany arms sales totaling 6.88 billion euros in 2016.

The ministry was headed by then-SPD leader Sigmar Gabriel until January, when it was taken over by his party colleague Brigitte Zypries, though this week's reports suggest she has proved no more effective in reining in arms exports than her predecessor. All German arms exports need approval by a security council that includes Angela Merkel and her key ministers, but the Economy Ministry is responsible for administering the sales.

Grässlin said it was "frightening" the way Zypries had "seamlessly continued the trade with human rights-violating and warmongering states - in this case the UAE."

An additional one million people are on the brink of famine in South Sudan, the UN says, as 20 million people risk starvation in countries hit by poor harvests and conflict. Aid pledges are well below targets. (11.04.2017)

EU moves to fend off hunger crisis in E. Africa and Yemen

Following pressure from Germany, a meeting was hastily convened in Brussels on the back of the Syria conference to mobilize assistance for an estimated 20 million people facing acute hunger in East Africa and Yemen. (06.04.2017)

Yemen aid workers: 'If ever there was a time for support, then it's now'

As a UN donor conference nears, aid workers warn the humanitarian crisis in Yemen could worsen without more international support. An attempted rebellion and Saudi-led military intervention has led to severe famine. (10.04.2017)