Yemen aid workers: 'If ever there was a time for support, then it's now'

As a UN donor conference nears, aid workers warn the humanitarian crisis in Yemen could worsen without more international support. An attempted rebellion and Saudi-led military intervention has led to severe famine. 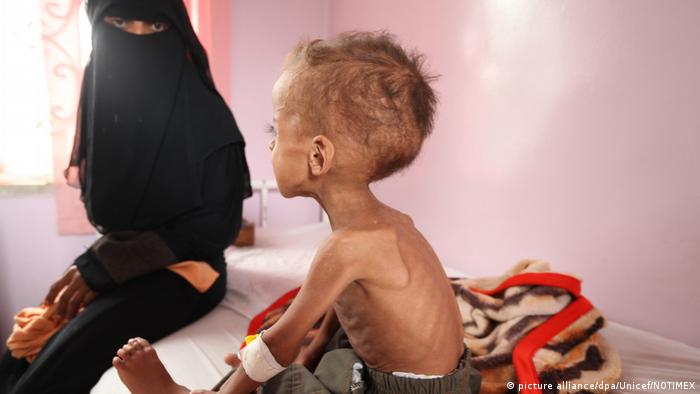 Famine is a growing concern in Yemen, where a two-year-old war has left millions without food and access to medical care.

International funding for Yemen is urgently needed in response to widespread malnutrition and limited access to medical care caused by the war in the country, representatives of an aid organization active in Yemen reported Monday in Berlin.

Roughly 17 million Yemenis are in desperate need of humanitarian assistance, among them 7 million Yemenis exposed to extreme food shortages and almost 500,000 severely malnourished children under the age of five, aid organization CARE International reported. Ahead of a UN donor conference later in April, aid workers warned that more money was needed to stop the situation from spiraling further out of control.

"If there was ever a time for support from the international community, then it's now," said Marten Mylius, an emergency help coordinator with CARE.

Less than 10 percent of the $2.1 billion (1.98 billion-euro) aid package sought by the UN for 2017 has been funded, according to the most recent UN numbers. The funding target is based on the projected costs of supplying basic provisions like food, water and shelter by those in need as a result of the war - more than 60 percent of Yemen's total population, according to CARE.

Famine is a growing concern, representatives said. With South Sudan, Nigeria and Somalia, Yemen is likely to be a focal point of Western humanitarian help in the months ahead. The UN donor conference for the country is scheduled for April 25 in Geneva.

Children suffer the most

Ordinary Yemenis, and especially children, continue to bear the brunt of a bombing campaign started by Saudi Arabia in March 2015 to stop the advance of Shiite Houthi rebels against the internationally-recognized government in Sana'a. A Saudi blockade of Yemeni ports and restrictions imposed on Yemeni airspace have proven more devastating for the civilian population, limiting the arrival of critical supplies in a country that depends heavily upon imports for foodstuffs, and preventing Yemenis from escaping the country.

The war has killed more than 10,000 people, according to a January UN estimate. More than 4,700 civilians had been killed and 8,200 injured as of March, the UN Commissioner for Human Rights reported. Roughly 2.2 million children in Yemen were malnourished as of December, "an all-time high and increasing," according to UNICEF.

CARE representatives criticized the use of food or medical access as forms of leverage, even as they avoided criticizing specific nations or groups. They called pointedly for the lifting of blockades and airspace restrictions.

"It's simply unacceptable," said CARE general secretary Karl-Otto Zentel. "It's unheard of that civilians severely injured in war are unable to be treated on location but can't be evacuated out of the country. These are unacceptable conditions."

Despite the extent of suffering on the ground, the war in Yemen receives less attention in the West than conflicts in Syria, Iraq and Afghanistan, where NATO forces are active. In Yemen, several NATO powers are providing intelligence and logistical support to the Saudis' coalition, but stopping short of airstrikes.

The conflict still has global consequences, seen by many observers as part of the broader regional struggle between Sunni power Saudi Arabia, a US ally, and Shiite Iran, which supports the rebels.

UN funding has yet to match the projected need for the country. In 2016, the organization received only 62 percent of the $1.6 billion sought. Of that total, CARE received $13.7 million for Yemen projects.