An additional one million people are on the brink of famine in South Sudan, the UN says, as 20 million people risk starvation in countries hit by poor harvests and conflict. Aid pledges are well below targets. 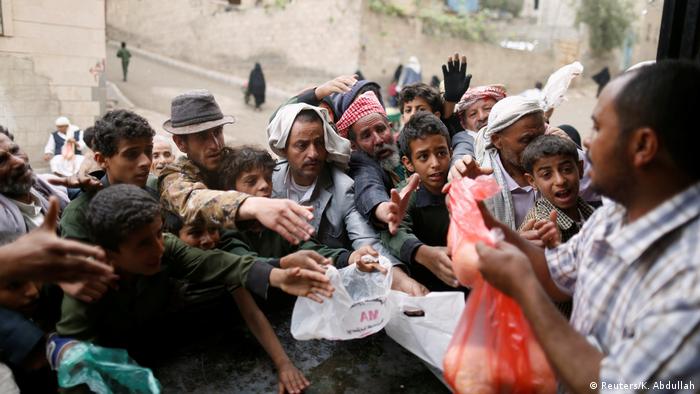 The UN refugee agency on Tuesday warned the risk that millions of people could starve to death in South Sudan and Somalia and neighboring countries, as well as in Yemen and Nigeria, was growing.

An avoidable humanitarian crisis, possibly worse than the Horn of Africa drought in 2011 during which 260,000 people died - half of them young children - "is fast becoming an inevitability," UNHCR spokesperson Adrian Edwards told reporters in Geneva.

The International Committee of the Red Cross (ICRC) warned late last month that the rest of the world had three to four months to stop starvation in Nigeria, Somalia, South Sudan and Yemen.

Famine was already declared in parts of South Sudan in February. On Tuesday Edwards said that an additional one million people in the country were on "the brink of famine."

David Hermann, who coordinates operations in the country for the International Committee of the Red Cross, said the situation in Somalia was also "very, very dire." Growing displacement in the region was also impacting neighboring east African countries like Ethiopia, Uganda, Tanzania and Rwanda.
In Yemen about 60 percent of the war-ravaged country's population is going hungry, amounting to 17 million people.

Food insecurity is also growing in northern Nigeria and the Lake Chad region, particularly in the areas affected by the conflict with militant group Boko Haram. The UN counts about 7 million people at risk there.

Despite scaling up its operations, UNHCR has a funding shortfall. Its operations in South Sudan, Somalia and Yemen are funded at between 3 and 11 percent, Edwards said.

Overall, the UN has appealed for $4.4 billion (4.15 billion euros) for the four countries but to date has received less than $984 million, Jens Laerke of the UN's Office for the Coordination of Humanitarian Affairs said.

"It is of immediate urgency that more funds are committed to avert a further descent into disaster in these acute crises," Laerke said.

A high-level meeting called for by German Foreign Minister Sigmar Gabriel was due to be held Wednesday in an attempt to raise more awareness for the dire humanitarian situation in the affected countries.

Aid still ‘responds to rather than prevents’ food crises in Africa

Africa is facing a severe food crisis affecting up to 60 million people. Christina Bennet, an international aid analyst, says the current aid system is not working and the focus needs to move from response to prevention. (21.03.2017)

My picture of the week | Famine in South Sudan